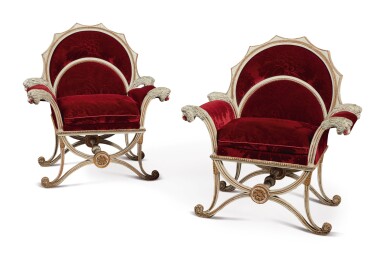 A PAIR OF AUSTRO-HUNGARIAN NEOCLASSICAL WHITE PAINTED AND PARCEL-GILT ARMCHAIRS, CIRCA 1800

A PAIR OF AUSTRO-HUNGARIAN NEOCLASSICAL WHITE PAINTED AND PARCEL-GILT ARMCHAIRS, CIRCA 1800

A PAIR OF AUSTRO-HUNGARIAN NEOCLASSICAL WHITE PAINTED AND PARCEL-GILT ARMCHAIRS , CIRCA 1800

in the manner of Andrei Voronikin, inside back seat rail of one stamped with Roman numerals VVII, en suite with lot 131

Painted and gilt decoration refreshed, with scattered losses, flaking and surface dirt, and traces of earlier grey-bronze colouring on the lion's heads. Typical age cracks, slight losses and abrasions to carving and shrinkage at joints and old repaired breaks, most notably to scrolled arms and legs consistent with age and use. Later metal support brackets to feet and inside corners of seat rails, with screwholes for previous brackets present. Three with dowel reinforcements to back medallions. Upholstered wooden planks atop seat frames replaced.

Possibly made for the Palais Erdödy, Budapest Bernard Steinitz, Paris

The four fauteuils featured across lots 131 and 132 might come from a salon suite made for the Palais Erdödy, Budapest.

A canape and four fauteuils of almost identical design from the suite were with Ariane Dandois, Paris, published as number 28 in her 2002 catalogue (only the canape and two fauteuils illustrated). Aptly named the Salon à l'Éventail by Dandois, the form is exactly the same as the present lots and the only differences are notably the green painted and parcel-gilt decorative scheme, and the additional relief decoration on the back rails (see fig.1). Interestingly, the lions' heads on the present lots show traces of earlier black pigments underneath the white painted surfaces.

A further stool attributed to the Palais Erdödy suite was in the collection of Mrs. Charles W. Engelhard, sold Christie's New York, 18 March 2005, lot 46. The stool is stamped underneath with numbers 'VI' and 'VII', similar to the offered lots, and maintains the same white painted and parcel-gilt decoration. It is likely that it was originally also an armchair, and is now lacking a back. According to the catalogue entry, Uli Printz, furniture specialist at the Dorotheum, Vienna, discovered an image of a 'magyar' console table with an identical base, dated 1810, made for the Erdödy Palace, Budapest.

The Erdödy Palace was the seat of Countess Anna Maria (Marie) Erdödy (1778-1837), and her husband, Count Peter Erdödy (1771-1837), one of the wealthiest and most powerful families of the Austro-Hungarian Empire. Marie Erdödy was one of the greatest supporters and closest confidants of Beethoven, to whom he dedicated his piano trios Op. 70 and later the cello sonatas Op. 102.

Property from a Distinguished Private Collection, Washington, D.C.
A PAIR OF AUSTRO-HUNGARIAN NEOCLASSICAL WHITE PAINTED AND PARCEL-GILT ARMCHAIRS, CIRCA 1800