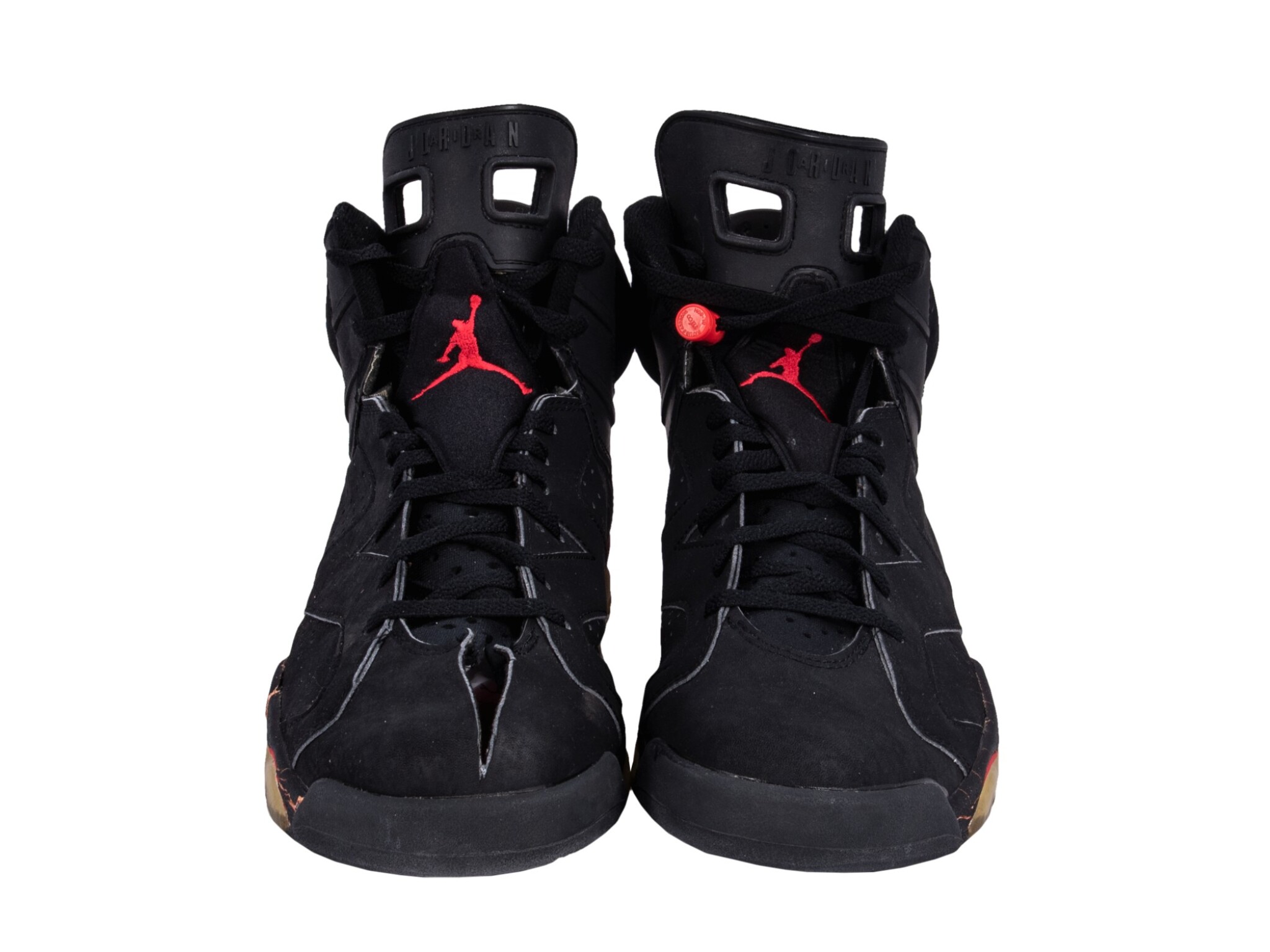 The 1991 NBA Finals marked a momentous occasion where Michael Jordan "Grabbed the Torch" from Magic Johnson. Before the 1991 Finals, Michael Jordan was thought of as a scoring machine incapable of winning a championship without conforming to the team concept illustrated by the likes of Magic Johnson and the Showtime Lakers. After Game 1 of the Finals, it appeared this trend would continue. However, Michael Jordan had other plans. The Bulls went on to defeat the Lakers 4-1 ushering in the Bulls dynasty. Michael Jordan won his first NBA Championship and his first NBA Finals MVP. These shoes were right there on the court at the inception of the Bulls’ dynasty that produced two 3-Peats and six Finals’ MVP’s for Michael Jordan.

These historic sneakers were gifted by Jordan to Nike executive Sonny Vaccaro immediately after Jordan won the championship. Sonny had been integral in recruiting Jordan to Nike and was credited as being the man who encouraged Nike to sign Jordan. These black Air Jordan high tops offered here have been photo matched to Game 4 of the 1991 NBA Finals by Sports Investors Authentication where Jordan’s 28 points led all scorers as he helped push the Bulls to within one game of the title. Jordan also added 13 assists and 5 rebounds in Chicago’s 87-82 victory – a precursor to the greatness that Jordan would establish in the Finals for years to come. Vaccaro was gifted these sneakers following Jordan’s first ever NBA title. Vaccaro was with Nike from 1977 through 1991 and was instrumental in pushing Nike to get contracts with NCAA schools, most notably the University of North Carolina – Jordan’s alma mater.

These feature the famed Air Jordan silhouette logo embroidered in red on each tongue. A slash or tan and red add a bit of color to the sides of the soles and a dramatic geometric design is found on the bottoms, complete with a large red Air Jordan silhouette logo. The backs of each sneaker have a raised Nike Air logo. The laces are intact and appear to be original to the sneakers. The sneakers show good game use with some scuffs and abrasions in evidence throughout. The right shoe has a slit on the toe, which was reportedly added after Jordan sprained his big toe. The foam areas of the soles on both sneakers are heavily cracked and on the right shoe has separated in multiple areas due to age. The front toe of the left sneaker has a slit extending from the base of the tongue to the beginning of the sole. Most importantly, His Airness has signed the back outside panel of each gamer in wonderful contrasting silver pen. One of the more striking Air Jordan designed complete with game use and signed by their namesake, Michael Jordan. These sneakers come with a letter of provenance from Sonny Vaccaro, who states in his letter that these sneakers were gifted to him by Jordan following the 1991 NBA Finals, a LOA from Sports Investors Authentication, who have photo matched these sneakers to Game 4 of the 1991 NBA Finals and a LOA from JSA for the signatures.

The soles on both shoes are cracked, flaking and sensitive to touch, with the left shoe in better condition than the right. We advise caution in any handling of the sneakers, and special arrangements will be made to hand-deliver the sneakers to the winning bidder (provided in continental USA) to eliminate the possibility of damage during shipping. If the winner is international they will be sent via a white glove method.

Please note that new information regarding the condition of this lot has been added to the online description.