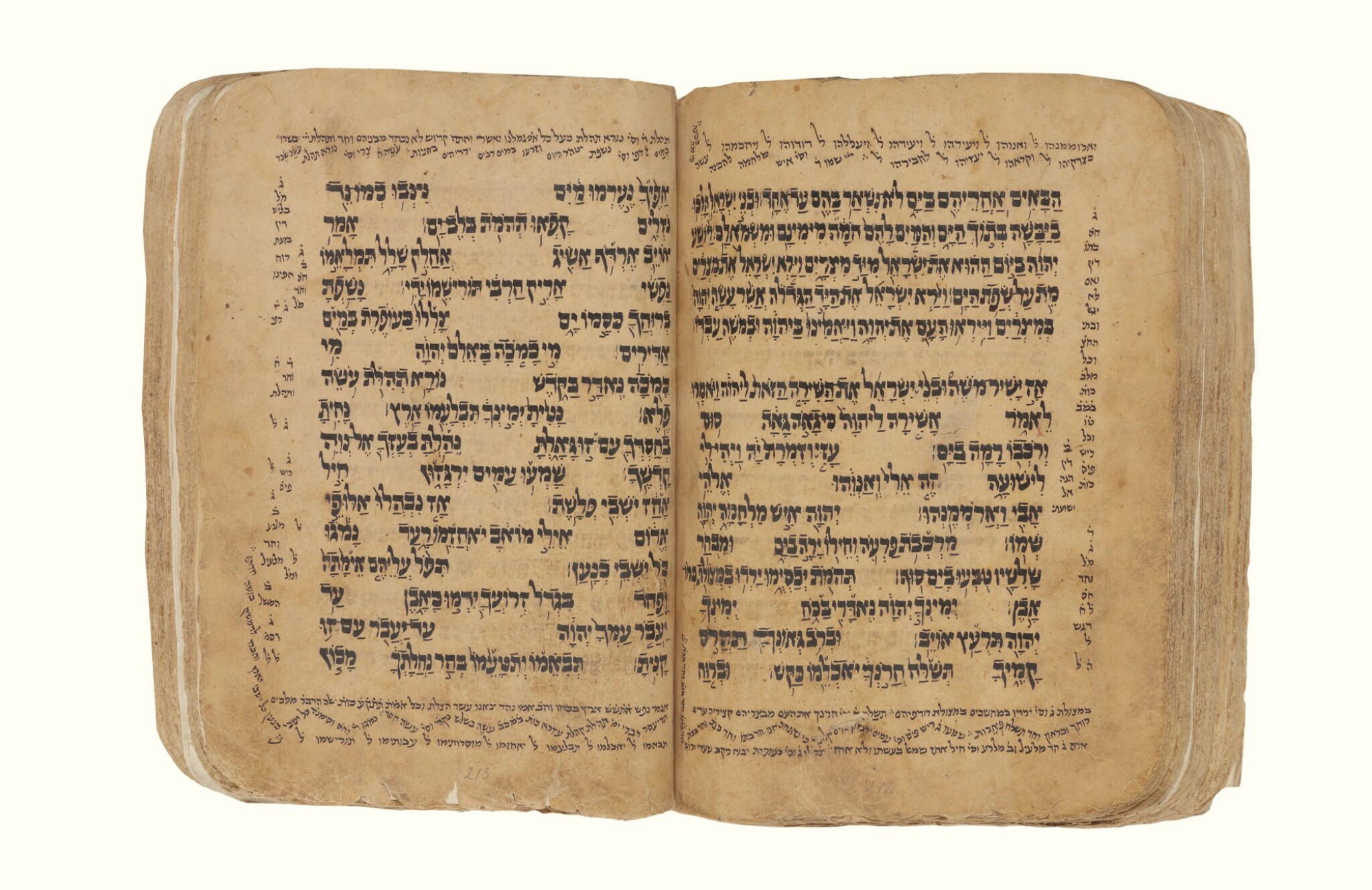 Rabbinic law requires that a Torah scroll be written without punctuation, vocalization, or accentuation in order to be considered fit for ritual use in the synagogue. Words are separated by spaces, paragraph divisions break up the flow of the text, and four letters (alef, he, vav, and yod) are frequently used to mark certain vowels, but even with these devices, the correct pronunciation and parsing of the biblical text into intelligible units is not readily apparent from its appearance in a scroll. Instead, Jews in antiquity relied on inherited reading traditions, passed down orally from one generation to the next, in order to understand the Bible.

In the early Middle Ages, not before the sixth century but also not later than the seventh, systems of committing these reading traditions to writing in biblical codices (not scrolls) developed in Palestine, Babylonia, and eventually specifically in Tiberias (Palestine). The last system, referred to as Tiberian, would, with time, become the standard one used throughout the Jewish world to record the vowels and accents of the Hebrew Scriptures.

In addition, extensive lists containing the details of the consonantal skeleton of the Bible, as well as its proper vocalization and accentuation—collectively known as the Masorah (lit., Tradition)—were drawn up in order to ensure that scribes would copy the text correctly. The tradition of Aaron Ben-Asher (first half of the tenth century), scion of a famous family of Tiberian Masorah scholars, was considered particularly authoritative, especially after Rabbi Moses Maimonides (1138-1204) wrote of his decision to use a Bible edited by Ben-Asher (the famous Aleppo Codex) as the exemplar for a Torah that he himself copied.

While the Jewish community of Yemen, whose roots stretch back to antiquity (and possibly to Second Temple times), had long used the Babylonian (supralinear) system of vocalization and accentuation when transcribing Torah codices, it, too, gradually adopted the Tiberian method, probably under the influence of Maimonides, whom Yemenite Jews revered as a halakhic authority. Because of the high degree of exactitude with which Yemenite biblical manuscripts, known as tijan (sing., taj; Arabic for “crown”), were copied, as well as their adherence to the prescriptions of the Masorah, modern researchers consider these volumes to be valuable witnesses to the Ben-Asher tradition. Indeed, the great Bible scholar Mordechai Breuer saw the fact that the eclectic version of the Bible that he had edited turned out, post facto, to match the tradition reflected in tijan as proof positive of the soundness of the methodology he had employed in making his editorial determinations. The present lot is a manuscript taj comprising the text of almost the entire Pentateuch, with only two original folios from the end of Deuteronomy (33:13b-34:12) and two section divider folios lacking (the former have been replaced with a single leaf inscribed in a nineteenth-century hand).

The main differences between tijan and Hebrew Bibles copied in other parts of the Jewish world concern minute details of the biblical text, its vocalization, and its accentuation. Examples include the use of the plural form va-yihyu (they were), rather than the singular va-yehi, in Gen. 9:29 (see 1:26) and the spelling of the word dakka (crushed) in Deut. 23:2 with a final alef, rather than a he (see 2:323). Another distinctive feature of tijan is their scrupulousness in laying out the biblical text, especially the songs, in consonance with Maimonides’ prescriptions. This means that the last two lines of the Song of the Sea (Ex. 15:1-19; see 1:212-214) each split their text into two blocks separated by an empty space and that the Song of Moses (Deut. 32:1-43; see 2:356-360) is transcribed on sixty-seven, rather than seventy, lines.

In addition to its value as a witness to the Yemenite textual tradition, this taj also boasts extensive rubrication of aliyyah and decorative parashah and Masorah markers, as well as delicately interwoven micrographic Masorah forming geometric patterns. Moreover, three of the biblical books (Exodus, Leviticus, and Numbers) are followed by an ornamental section divider with geometric borders enclosing the rubricated text of a popular Yemenite Aramaic mnemonic for all of each book’s parashiyyot. The first volume contains two further distinctively Yemenite features: Rabbi Judah Halevi’s (1075-1141) liturgical poem Yehidah, shahari beit e-l ve-sippav with supralinear vocalization (p. 1), as well as most of the alphabetical acrostic prayer E-l, libbi petah recited by some Yemenite schoolchildren every day before commencing their study sessions (p. 310).

Written in a clear, bold hand, elegantly decorated, and staunchly faithful to the Yemenite biblical manuscript tradition, the present lot truly embodies the superlative coronal meaning of taj as it was originally intended.

“This was my portion from all of my labors: I, the humble Salim ibn Joseph al-Aziri, may his soul be bound up in the Bond of Life. I have donated this object; he who reads it shall rejoice, while he who steals it shall be obliterated—and the nation of God shall dwell in peace” (1:1).

“This was my portion from all of my labors: I, the humble Salim, son of my master, my father Joseph ben Salim al-Aziri, may his soul be bound up in the Bond of Life. I have donated this object, known as the holy taj […] to my synagogue, which God gave me the opportunity to build in the city Asade [?], may the Uppermost prosper it. It shall be called by my name as a source of merit and as a remembrance. He who reads it shall rejoice, while he who steals it shall be obliterated—and the nation of God shall dwell in peace” (2:1).

David Stern, “On the Term Keter as a Title for Bibles: A Speculation About Its Origins,” in Shmuel Glick, Evelyn M. Cohen, and Angelo M. Piattelli (eds.), Meḥevah le-Menaḥem: Studies in Honor of Menahem Hayyim Schmelzer (Jerusalem: JTS-Schocken Institute for Jewish Research, 2019), *259-*273.