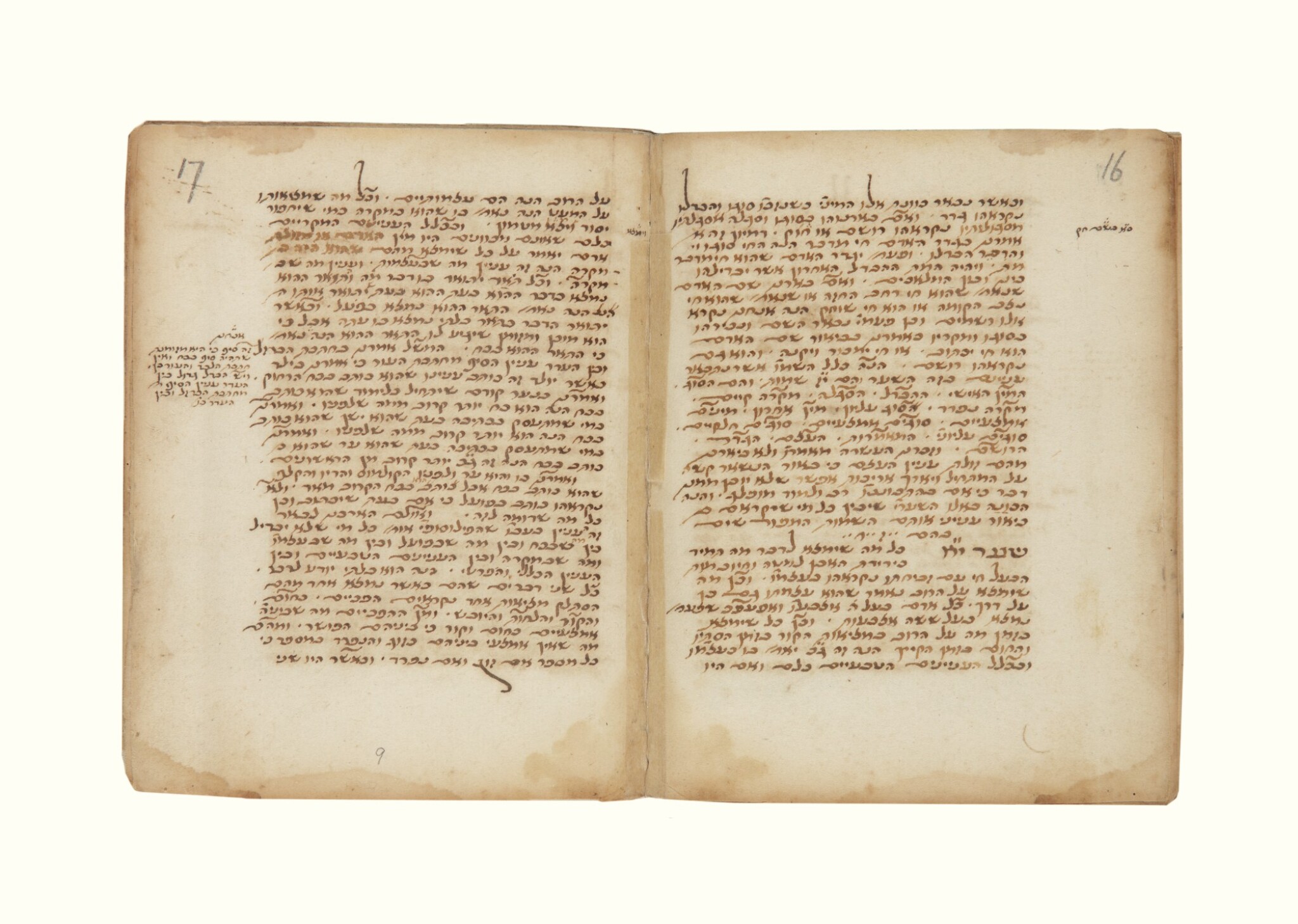 25 of 27 pages (5 3/8 x 4 3/8 in.; 136 x 110 mm) on paper; watermark similar to Briquet 2445 (Vicenza, 1441 and Venice, 1442); modern pagination in pencil in Arabic numerals in upper-outer corners (cited); modern foliation in pencil in Arabic numerals in lower margins of rectos at center; written in elegant Italian semi-cursive script in brown ink; single-column text of thirty-two to thirty-seven lines; ruled along outer margins only; justification of lines via dilation or contraction of letters, abbreviation, and use of anticipatory letters; no catchwords; marginalia and corrections intermittently throughout; scribe’s name (Abraham) indicated via dotting of initial letters on pp. 7, 9; scribal colophon on p. 25. Enlarged chapter numbers; decorative flourishes on some letters (particularly lameds at the top of a page and gimels at the bottom of a page); tapering text on p. 25. Lacking 2 pages (1 folio) following p. 20 (containing text from the middle of ch. 13); slight scattered staining and dampstaining, at times somewhat obscuring text; all folios strengthened along gutters; small nick in upper edges of pp. 1-6; pp. 21-24 (ff. 11-12) bound out of order; upper-outer corners of pp. 21-24 repaired; outer edge of p. 25 repaired. Modern maroon buckram; shelfmark lettered in gilt on spine; modern paper flyleaves and pastedowns; annexed photocopy of letter indicating provenance below upper board.

An early copy of Maimonides’ first book, one of the most popular medieval Jewish works of philosophy.

Sefer ha-higgayon, better known as Millot or Shemot ha-higgayon, is a brief introduction to Aristotelian logic and philosophy composed by Rambam about thirty years before the completion of his much more expansive Moreh nevukhim (Guide of the Perplexed). In fourteen chapters, it treats the 175 most important terms used in the discussion of logical theory, physics, metaphysics, and political science, relying heavily on the prior works of Alfarabi and Algazali. Written originally in Arabic as Maqālah fī ṣinā‘at al-manṭiq

, it was subsequently translated at least three times into Hebrew, the most famous of these versions being that of Rabbi Moses Ibn Tibbon (d. ca. 1283), who appears to have completed his project about 1255. Although the treatise, the first extant logical handbook compiled by a Jew, achieved immense popularity in its Tibbonian form, the earliest surviving dated manuscript comes from the second half of the fourteenth century (1369). The present, elegantly scribed copy, produced less than a century after that one and over sixty years prior to the first edition (Basel, 1527), thus constitutes an early testament to the rich Judeo-Italian Renaissance culture from which it stems.

Sassoon 1221 (not cataloged in Ohel Dawid)

Joel L. Kraemer, “Maimonides on the Philosophic Sciences in his Treatise on the Art of Logic,” in Joel L. Kraemer (ed.), Perspectives on Maimonides: Philosophical and Historical Studies (Oxford; New York: Oxford University Press for The Littman Library, 1991), 77-104.