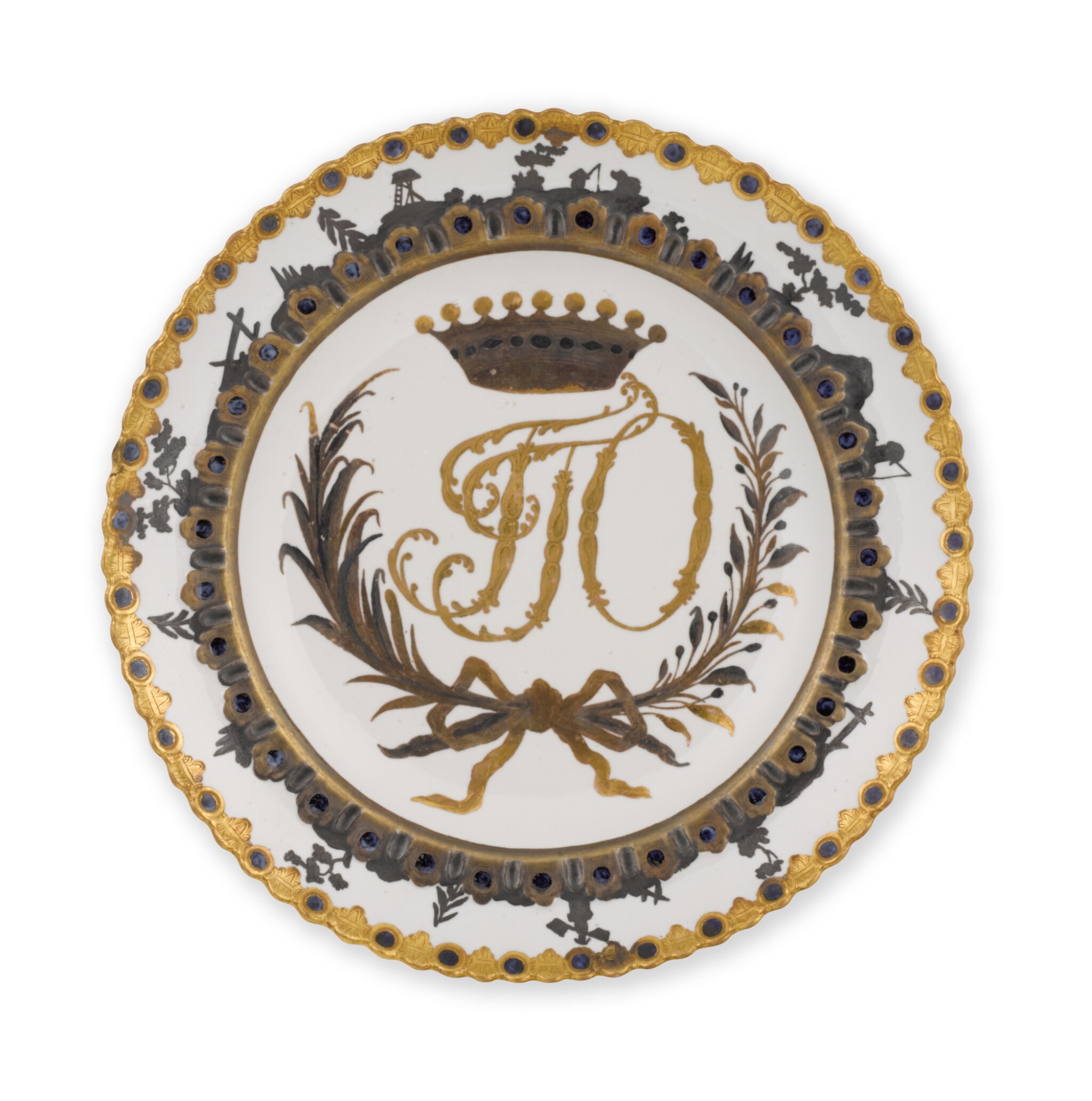 the cavettos decorated with interlaced and crowned gilt Cyrillic monogram GGO beneath a nine-pointed Count's coronet and set within a ribbon-tied wreath of laurel and palm branches, the raised border with moulded and ciselé gilt inner band with blue pellets and with ciselé silver landscape frieze, with black factory marks, gilt ciselé No. 1

To request a condition report for this lot, please contact Helen.culversmith@sothebys.com.

This plate is part of a magnificent porcelain breakfast and toilette service, one of the many extravagant gifts awarded by Empress Catherine II (reigned 1762–1796) to Count Grigorii Orlov (1734–1783), one of the key figures in the palace coup that placed Catherine on the throne. He was also her lover and advisor for over a decade, and she showered him with expensive gifts in thanks for the services he rendered her and the Russian nation. At a time when only the sovereign owned such large, complex porcelain services, this set was a truly extravagant gift, particularly since shortly thereafter she gave him the grandiose silver service designed by Étienne-Maurice Falconet (1716–1791) and executed by the Parisian silversmiths Jacques (1707–1784) and Jacques-Nicolas Roettiers (1736–1788/89?) and the grand Marble Palace in St. Petersburg.

The service was commissioned from the Imperial Porcelain Factory in the early years of Catherine's reign, possibly in 1765 when Orlov was appointed Chief of Ordinance and when Catherine reorganized the factory so that it was capable of producing such a large and complex service with such innovative ornament. In addition to the complex shapes and molding, the service was decorated with gilding and silvering, most of which has now blackened. The service was designed by the multi-talented Gavriil Ignat'evich Kozlov (1738–1791); born a serf, Kozlov went on to become a Professor at the Academy of Arts, Director of the Imperial Tapestry Manufactory and designer of several of the most important porcelain services produced during Catherine's reign. The service is decorated with the cypher of Count Grigorii Grigorievich Orlov in interlacing gold Cyrillic letters. On the plates, this cypher is enclosed in a wreath that is tied with ribbons at the top and surmounted by a nine-point crown of a Count, the title he was given on the day of Catherine's coronation in September 1762. It is one of the few services produced during the first period of the factory which bears the Imperial Eagle mark.