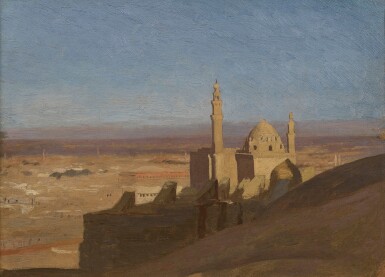 Originl canvas. Under ultra-violet light there are some broader strokes of retouching and some minor, scattered pinhead sized spots of retouching visible. Overall this work is in good condition.

Mme Renault (daughter of the artist, by descent from the above); thence by descent

Painted in Cairo, the present work probably dates from Gérôme’s second trip to Egypt in 1862, when he crossed the desert for the first time and also went to Syria. He returned to Egypt in 1868, this time with a group which included Albert Goupil, Paul Lenoir, and Léon Bonnat, and together they journeyed into the Sinai desert.

The present work can be compared with other studies from Gérôme’s travels, for example the view of the Monastery of Saint Catherine which was sold in these rooms on 9 July 2019. Of identical dimensions to the present work, that oil shared the same early provenance. As Dr Emily Weeks has noted: 'the importance of these plein air oil sketches to Gérôme is made clear in an autobiographical essay of 1878:

"[E]ven when worn out after long marches under the bright sun, as soon as our camping spot was reached I got down to work with concentration. But Oh! How many things were left behind of which I carried only the memory away! And I prefer three touches of colour on a piece of canvas to the most vivid memory, but one had to continue on with some regret."

The present study was taken up by Gérôme as the basis for the background of Bonaparte in Cairo (Hearst Castle, California): one of a series of oils setting Napoleon in Cairo, inspired by Gérôme's own studies painted on-the-spot.

To be included in Dr Emily M. Weeks's revision of the artist's catalogue raisonné by Gerald Ackerman.