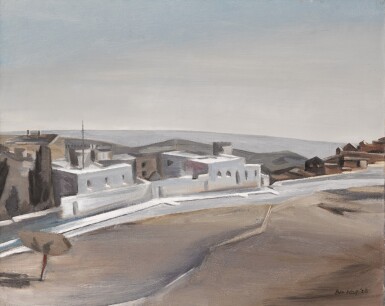 THE HOSPITAL OF THE KNIGHTS OF ST. JOHN, BETHLEHEM ROAD, JERUSALEM: MOONLIGHT

The canvas appears original. There is a possible Artist's pinhole to the upper left corner. There are a few scattered fine lines of craquelure to the work, most evident to the centre and right of the sky with a few further more minor scattered instances elsewhere. There may be some light surface dirt in a few places and one or two instances of studio detritus and surface matter. This excepting, the work appears in very good overall condition.

Inspection under ultraviolet light reveals no obvious signs of fluorescence or retouching.

The work is held in a slip and a painted wooden frame.

Acquired from the Artist and thence by descent

We are grateful to Richard Cork for his kind assistance with the cataloguing of the present work.

Having been appointed as an official artist of the newly-formed Zionist Organisation to Palestine, in 1923, David Bomberg and his wife embarked on a tour of Palestine that was to have a profound effect on Bomberg and his art. Following the chaos and destruction of the First World War, he began to reassess his relationship with abstraction and the art of the machine age. In addition to the horrors he had witnessed whilst serving in the trenches, he had experienced the loss of his brother and several close friends, including Isaac Rosenberg and T.E. Hulme. Like many artists, he was now more attracted by a return to tradition and order within his art, which he explored in a series of landscape paintings made during his travels.

Richard Cork writes that ‘before he went to Jerusalem, his art had been dominated above all by the human figure’ (Cork, 1987, p. 149). This disappeared as he took inspiration from this new scenery. Bomberg’s studio was located above the roof-tops of the city, which permitted him to capture the panoramic views in his work, as can be seen in The Hospital of the Knights of St. John, Bethlehem Road, Jerusalem: Moonlight, painted shortly after the couple’s arrival in Jerusalem. Bomberg was particularly inspired by the Middle Eastern light – not only by the sun, which shone with an intensity he had never previously known, but also by the moon, which transformed the landscape at night: ‘during the harsher moments of the day the Mediterranean sun tended to dissect a subject into so many hard-shaped objects; but by moonlight objects were blended more smoothly. Hues were less distinct’ (William Lipke, David Bomberg, London, 1967, p. 56).