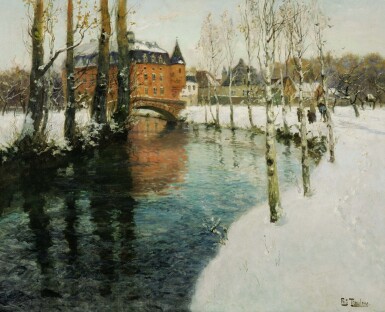 FRITS THAULOW | A CHÂTEAU IN NORMANDY

FRITS THAULOW | A CHÂTEAU IN NORMANDY

A CHÂTEAU IN NORMANDY

Original canvas. There are no signs of retouching visible under ultraviolet light. This work is overall in good original condition.

European private collection (purchased from the above on 19 September 1973)

Thaulow was a close friend of Claude Monet, and was related to Paul Gauguin through his marriage to Gauguin's sister-in-law Ingeborg Gad. A leading Norwegian exponent of landscape painting en plein air, Thaulow's work shows the influence of the French Impressionists, interpreted from a distinctly Nordic viewpoint. He often worked and exhibited in France, where he moved in 1892, while regularly returning to Norway to paint. Thaulow is particularly renowned for his masterful rendering of water and snow, exemplified in this painting.

In the autumn of 1894, Thaulow moved from Montreuil-sur-Mer (Pas-de-Calais) to Dieppe in Normandy, where he was to remain for four years. Heavy snow in January 1895 gave the artist an opportunity to study and paint French winter scenes around Dieppe, notably the village of Petit-Appeville by the river Scie close to Dieppe. The present work compositionally relates to a series of four pastels (each measuring circa 65 by 80cm.) from this period, although the architecture in the present work is more elaborate and a stone bridge has been added.

It is possible that the present work is the one sold by Edward Brandus at the Fifth Avenue Art Galleries in New York in April 1908, although the title of that painting, Winter Scene near Copenhagen, is a misnomer as Thaulow did not paint any of his winter scenes in Denmark. Brandus was a regular buyer at Thaulow's dealer Georges Petit, suggesting a possible earlier provenance, and the frame is typical of frames sold by that gallery.

Winter views, such as the present work, numbered among Thaulow's favourite subjects. Viewed through the prism of progressive French painting, Thaulow commented in an interview for the Verden Gang in January 1901: 'Look at these old, red buildings with the white snow and the black water. Nothing is as lovely as red and black. In the summer the red colour will be dull and the river will have no colour. It is the white snow which gives the colours their value'.

The authenticity of this work has been confirmed by Vidar Poulsson.