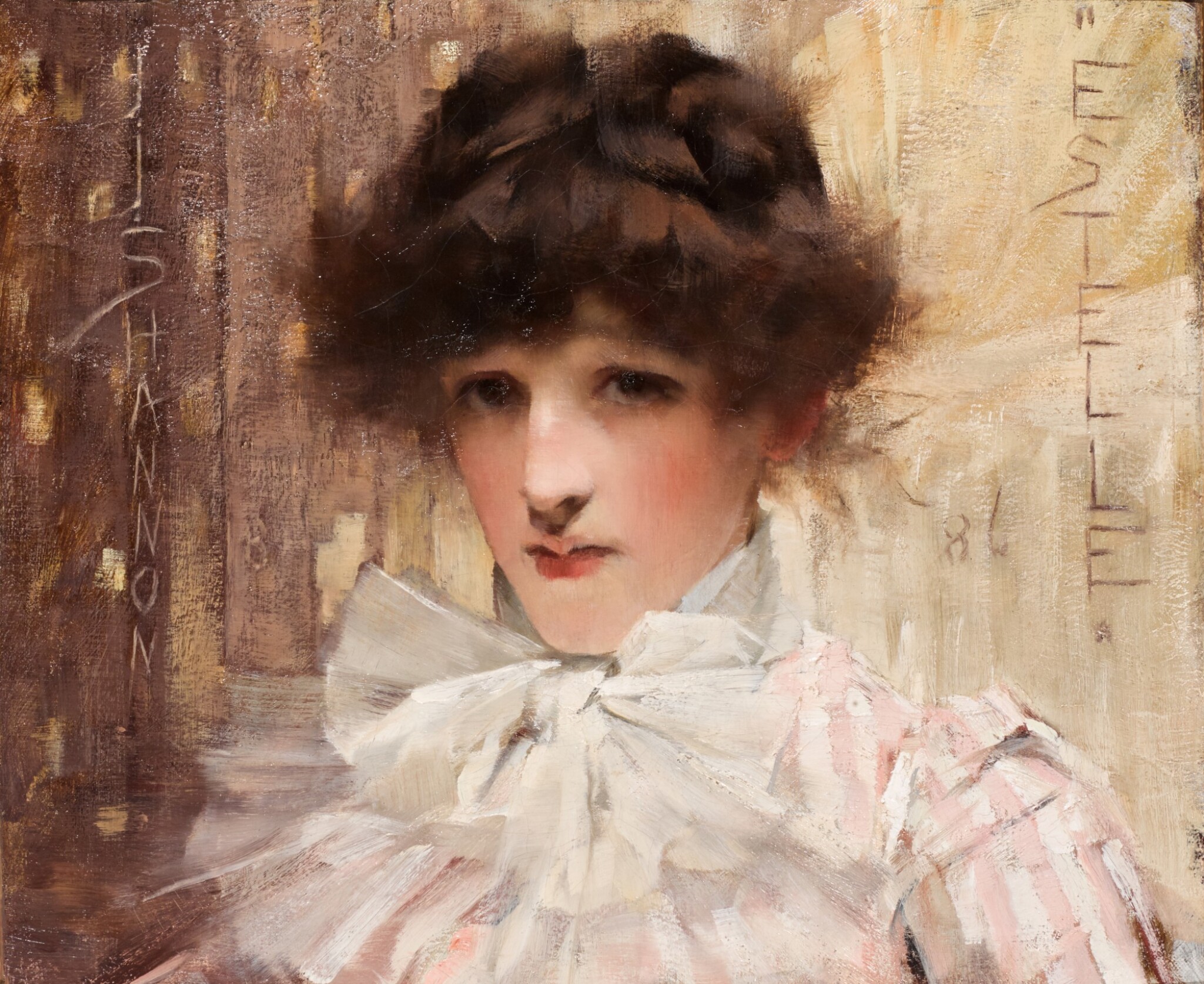 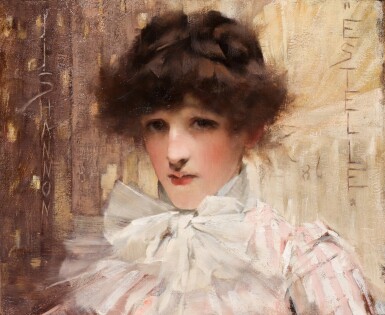 The canvas has been relined. There are a handful of very small spots of retouching visible under ultra-violet light. There is very faint, stable craquelure to her face and hair visible upon close inspection. Overall this work is in good condition, clean and ready to hang.

Like fellow expatriate Americans James Mc Neill Whistler (1834-1903) and John Singer Sargent (1856-1925), Shannon was a powerful presence in British painting during the nineteenth century's closing decades. Born in Aubrun, New York, he had spent an itinerant childhood in the United States before travelling alone to London in 1878. There, he enrolled at the National Art Training School in South Kensington (later the Royal College of Art) and began to fashion a complete artistic identity under the tutelage of its reformist principal, the French-trained Sir Edward John Poynter (1836-1919).

Shannon made his debut at the Royal Academy in 1881, shortly after completing his training, with a portrait of Queen Victoria's Lady-in-Waiting, The Honourable Horatia Stopford (Royal Collection, Osborne House). The portrait had been commissioned by none other than the Queen herself, on Poynter's recommendation, and its showing at the Academy marked the beginning of a glittering career as a society portraitist within the British art establishment. However, no doubt as a result of Poynter's teaching, Shannon also developed strong links with the British avant-garde. He secured a number of commissions, including the portrait of Janet Monach Patey painted in 1884 (Tate), but it was not until 1886 that his second breakthrough occurred with Miss Annie Beebe, a picture rejected by the Royal Academy, but shown to great acclaim at the Grosvenor Gallery. As his stature and demand as a portraitist grew during the 1880s, he aligned himself with the new generation of French-taught painters grouped around Henry Herbert La Thangue (1859-1929) and Sir George Clausen (1852-1944). Fired by the aesthetic politics of Jules Bastien-Lepage (1848-1884) and Carolus-Duran (1838-1917), these artists generated one of the more profound challenges to the art institutions of their nation. Formed in 1886, the New English Art Club, of which Shannon was also a founding member, was initially to have been called the Society of Anglo-French Artists and loudly proclaimed itself an alternative to the Royal Academy regime.

It is likely that Shannon saw Jules Bastien-Lepage’s portrait of the actress Sarah Bernhardt at the Grosvenor Gallery in 1880. Bernhardt’s images were the epitome of belle époque glamour. She was the first ‘celebrity’, whose image was widely known throughout Europe from the poster designs for her plays and publicity photographs and paintings. The unidentified model for Shannon’s Estelle, painted in 1886, closely resembles Bernhardt, with her elongated Esquiline features and shadowed, brooding eyes. Set against a backdrop of pale diaphanous curtains, she directly engages with the viewer with her uninhibited gaze.

Estelle was painted with the characteristic 'square brush' handling of Lepage's British followers, as Morley Roberts observed when discussing his style in the late 1880s; '... his present quiet method has been arrived at through the clever and evidently dexterous brushwork which he learnt originally from La Thangue.' (Morley Roberts, A Colony of Artists, The Scottish Art Review, vol II, 1889, p.73). Although at first Shannon was regarded as a follower of La Thangue the critics were soon to realise that he was no mere imitator. As his biographer Lewis Hind explained; 'He does not, like Bastien-Lepage, obtain fine textures and the velvet softness of women's skin with small brushes. No, his is the vigorous and swift technique of the square brush laid on with unerring precision. He is a graceful and rapid worker, with a remarkable power of suggesting a likeness, and he has been known to produce an excellent half-length at a single sitting.' (Lewis Hind, The Work of JJ Shannon, The Studio, vol VIII, July 1896, p.67)

Shannon lived among a colony of artists at Wentworth Studios in Manresa Road, a cul-de-sac running north from King's Road in Chelsea, along with La Thangue, Frank Brangwyn and William Llewellyn. These artistic friendships among Royal Academy reformers had been forged in the wake of the first New English Art Club exhibition at which Shannon showed in 1886. Like the other members of this colony, Shannon was a true radical and with Estelle he presents us with a very modern image of the ‘New Woman’, independent, fashionable and no mere decorative visage. The tactile nature of the taffeta bow, the fashionable hair-style and the lack of distracting jewellery makes the picture boldly modern. Another element which seems very much of its time is the manner in which the picture is inscribed vertically, identifying what is presumably the name of the model. This decorative embellishment typifies Shannon's work of the mid-eighties and is seen in another portrait study of 1886, entitled Margaret (Heritage Auctions, Texas , 8 May 2008, as Baby in a Ruffled Dress). It also anticipates by ten years, the sequence of Shannon’s semi-symbolist portraits of Violet, Duchess of Rutland, his most important patron.