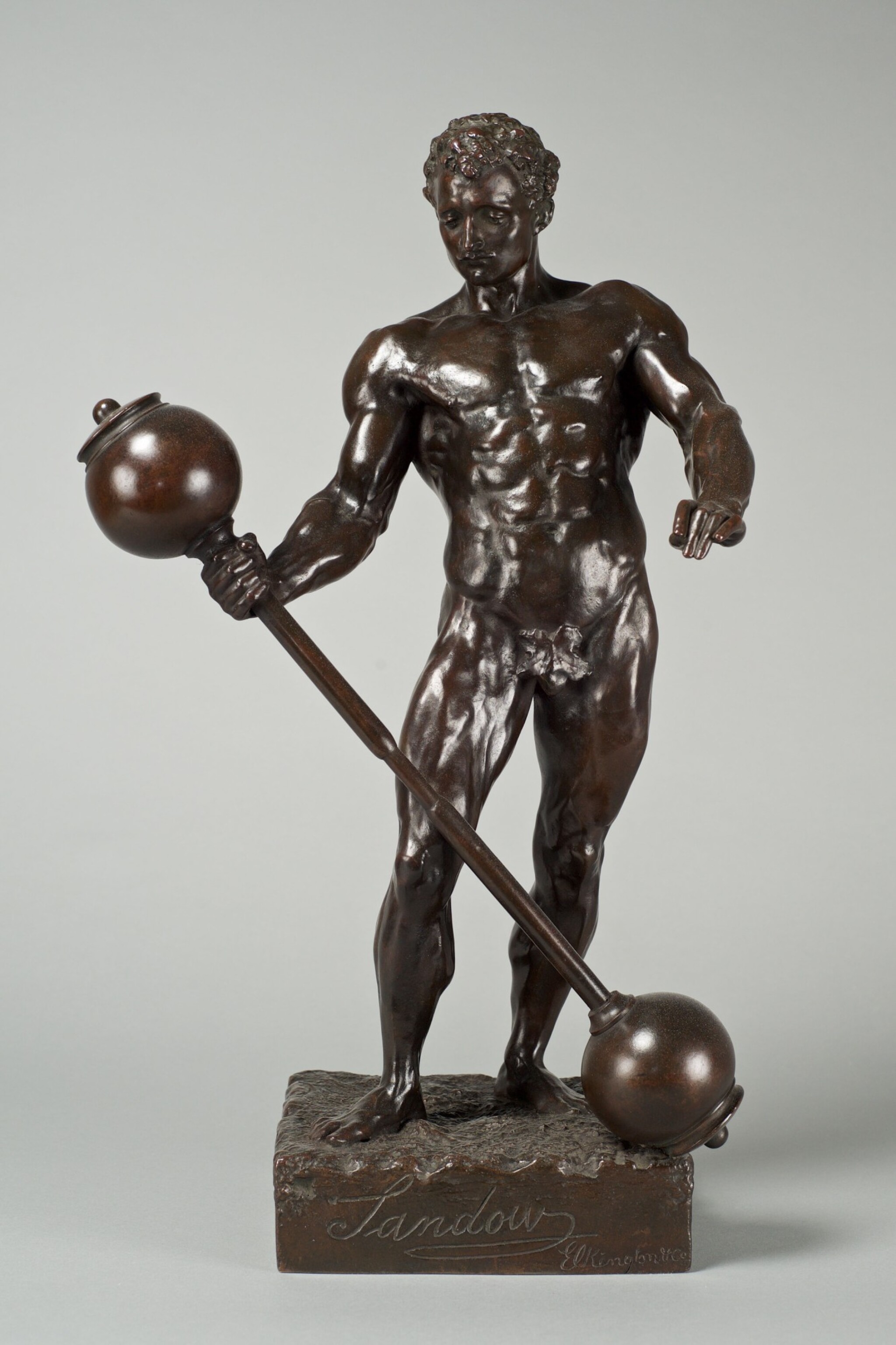 Conceived and cast in London, circa 1891.

This remarkable bronze would be the perfect addition to the ultimate gym. It represents Eugen Sandow (1867-1925) who was the most famous strongman of the Victorian and Edwardian eras. Sandow organised the world’s first ever bodybuilding competition in 1901 at the Royal Albert Hall with himself, Sir Arthur Conan Doyle and Sir Charles Lawes as judges. Casts of Pomeroy’s statue in gold, silver and bronze were awarded to the winners.

Sandow was born in the Prussian town of Königsberg in 1867 to Jewish parents and became interested in the physical form when he visited Italy as a child. He left Prussia, ironically to avoid military service, and travelled extensively, eventually arriving in Brussels where he was mentored by the strongman Ludwig Durlacher who performed under the pseudonym Professor Atilla. Sandow eventually came to England and married an Englishwoman. In 1889, he appeared on the British music-hall stage when he defeated another flamboyant strongman in a contest of weightlifting and chain snapping. His fame accelerated and he toured the world but eventually settled in England, where his fitness regimes were followed by the great and the good. He even went on to become physical instructor to King George V. Interestingly, Sandow measured the proportions of ancient statues, formulating his own ‘Grecian Ideal’ which he attempted to apply to his own physique.

Frederick William Pomeroy was a key member of the New Sculpture Movement which revolutionised British sculpture towards the end of the 19th century. British sculpture was fundamentally changed with the arrival of the French artist Jules Dalou in 1871, who taught the art of figurative sculpture to his students. This had a profound impact on Lord Leighton who, in 1877, unveiled his Athlete Wresting with a Python, in which a muscled youth is frozen in a death match with a deadly snake. Sculptors such as Alfred Gilbert, Harry Bates, and of course, Pomeroy sought to capture naturalistic renderings of human anatomy, in contrast to the impressionistic style of their Parisian contemporaries.

Pomeroy’s choice of Sandow as a model should be seen as fitting into this narrative. However, it differs from many of the idealised nudes of Gilbert, Leighton and Bates, in being a contemporary portrait of a distinctly fin-de-siècle phenomenon: the strongman with his barbells. Appropriately, ‘enhanced’ casts of Pomeroy’s Sandow are still awarded to winners of the Mr Olympia competition (International Federation of Bodybuilding and Fitness) to this day. The present cast is a particularly beautiful period example with a rich brown patina in very good condition.

Pomeroy entered the Royal Academy Schools in 1880 and in 1885 won the Gold Medal travelling scholarship. After studying with Marius-Jean-Antonin Mercié in Paris and travelling in Italy, he returned to London and began to exhibit with the Arts and Crafts Exhibition Society (1888). Pomeroy was an exponent of the New Sculpture and like many of his contemporaries he executed ideal figures drawn from mythology and literature showing the twin influences of Renaissance Italy and contemporary France. Typical works include the bronze Dionysius (1890; London, Tate) and Love the Conqueror (1893; Liverpool, Walker A.G.). Numerous strongly modeled monumental works in bronze include Robert Burns (1894; Paisley), Dean Hook (1901; Leeds) and four colossal figures (1905) for Vauxhall Bridge, London. Pomeroy was made ARA in 1907, Master of the Art Workers’ Guild in 1908, a council member of the Royal Society of British Sculptors in 1914 and RA in 1917.