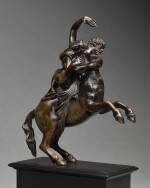 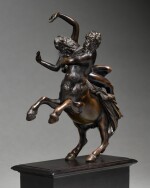 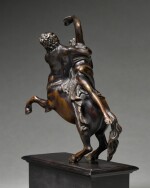 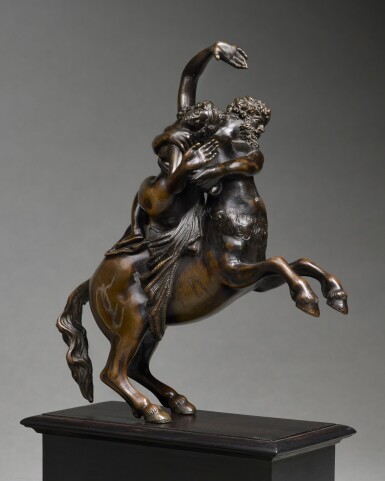 AFTER GIAMBOLOGNA | NESSUS AND DEIANEIRA

AFTER GIAMBOLOGNA | NESSUS AND DEIANEIRA

Overall the condition of the bronze is good, with minor dirt and wear to the surface consistent with age. There is minor wear to the lacquer patina, including rubbing at the high points, leading to attractive highlights in the colouring. There is some small residue to the proper right side of the centaur’s haunches. The woman’s fingers are slightly warped. A few very minor nicks and scratches, including to the woman’s legs. The bronze rocks very slightly on the wood base

Minor general wear to the wood base.

First modelled in 1575-1576, Nessus and Deianeira proved to be one of Giambologna's most successful compositions. Hercules’ wife, Deianeira, was seized by the Centaur Nessus while crossing a river, and subsequently rescued by her hero-husband, who slew the Centaur. Greek myth tells of the poignant consequences of the event, when Deianeira used Nessus’ blood as a love potion on her unfaithful husband, unaware that the poison within would destroy his mortal form. Giambologna created at least three signed bronze versions of the model, indicating the high esteem in which it was held by both the artist and his patrons. His radically complex composition, with two intertwined figures full of dynamism and balanced tension, explains its long lasting popularity.

The present bronze diverges from Giambologna's variants of the model in the positioning of Deianeira's arms, as well as stylistic details. A number of similar casts of this variant are known, including one sold at Sotheby's on 4 July 1991 (lot 113), and another sold at Christie's London on 12 June 2003 (lot 1123). Interestingly, Lankheit (op. cit.) illustrates a wax model of the present composition produced for the Doccia manufactory, which was established in 1737 by Marchese Carlo Ginori and employed sculptors such as Massimiliano Soldani Benzi and Giovanni Battista Foggini as modellers. The fine quality of its finishing, and the reddish colour of the patina, indicate a Florentine origin for the present bronze.