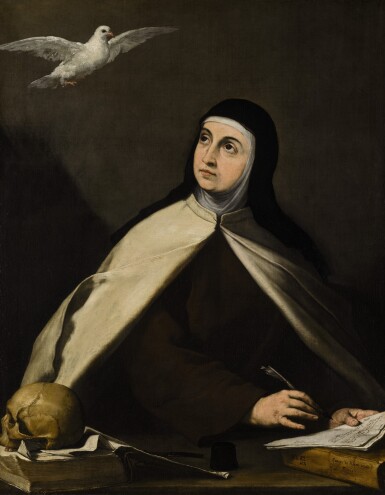 Oil on canvas, in a gilt wood frame with some wear.

The original canvas is lined. There is a slight loss of tension and the tacking edge has degraded. The paint surface is very slightly raised but is stable and generally in a good preserved state. The paint layer is in a good original condition. Under u-v light a moderate amount of restored pitted loss can be detected to the face along with the careful reduction of a fine filigree of dark shrinkage craquelure. Fine details such as those of the Saint's eyelashes and hands are well retained. Removal of the discoloured and degraded varnish will reveal very good chromatic and tonal values. The energetic and bravura brushwork along with the impasted areas are in very well preserved condition.

French private collection, from the 1850s;

N. Spinosa, Ribera, La obra completa, Madrid 2008, p. 463, no. A330, reproduced (erroneously listed as having been in the Abbeville collection).

This striking depiction of Saint Teresa of Avila, the most important female religious figure and writer of the Spanish sixteenth century, was painted in 1644 by Jusepe de Ribera, one of Spain’s leading artists of the following century. As a theologian and reformer of the Catholic Church, founding the Discalced Order of the Carmelites with Saint John of the Cross, Teresa played a significant role in the Counter Reformation. Ribera, as one of the principal exponents of the post-Tridentine aesthetic through the visual arts, is equally noteworthy. The union of these two figures in this signed and dated work typical of Ribera’s production from the 1640s therefore seems entirely appropriate.

By this stage in his career Ribera had reached the peak of his success, both artistically and commercially. His production focused on bust-length figures of saints depicted in a way that shows the extent to which he had succeeded in reconciling the tenebrism of Caravaggio with the restrained classicism of paintings he had seen in Rome a few years before. The present design must have found notable success, for an unsigned and undated replica, which Nicola Spinosa lists as autograph, is in the Museo de Bellas Artes in Valencia.1 A copy after the work is also listed as being in Seville.

Teresa Sánchez de Cepeda y Ahumada (1515–1582; canonized in 1628) was born in Avila in Old Castile and took the Carmelite habit at the convent of the Incarnation in Avila in 1536. She was active in the reform of the Carmelite Order and was responsible for establishing numerous convents in Spain, whose members were known as ‘Barefoot’ or ‘Discalced’. In 1562 Teresa founded a monastery in Avila dedicated to Saint Joseph, in some measure contributing to the growing cult for this figure. Here, Ribera has chosen to portray her as a visionary – searching for inspiration, she interrupts her writing to look up at the Holy Spirit, seen as a dove which floats above her head. Indeed Teresa experienced a number of mystical visions, which she duly described in her writings. She was named a Doctor of the Church in 1970.