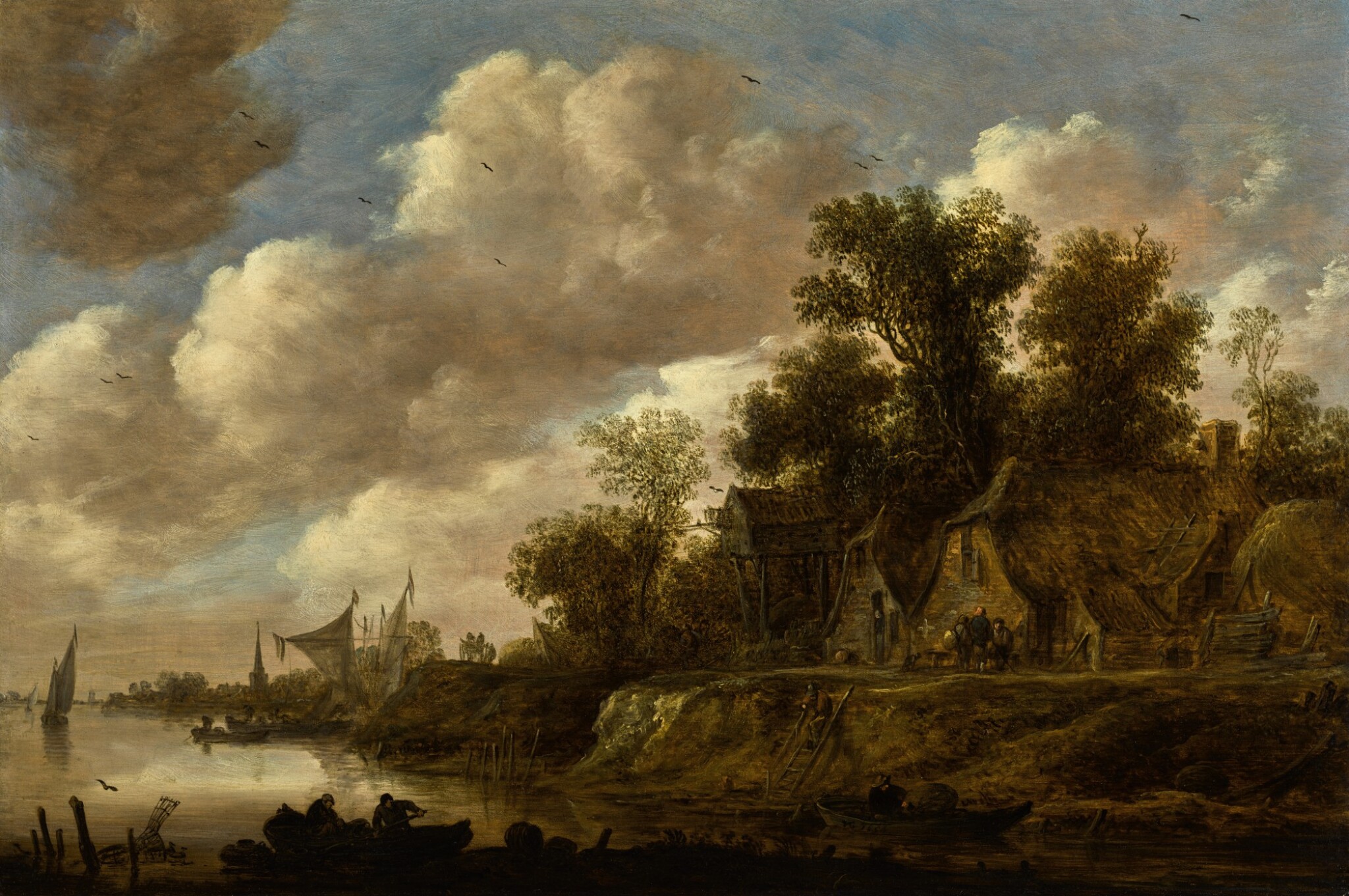 Property from the Collection of Peter Baltzer

River landscape with farmhouses and a dovecote upon a high bank

The oak panel is in a good preserved state. It is cradled and under a little tension which is reflected in a minor hairline horizontal fracture, approximately 2-3 cm in length, upper left. The paint layer is in a good original condition; the texture of the paint, particularly the impasted areas, is in a good state. Under u-v light a scattering of minor restorations can be detected across the surface, mostly through the sky. Some of the finer details to birds, shadows within the foreground and the edges of the leaves have been slightly compromised. Tonal and chromatic values have been retained. Removal of a slightly discoloured varnish will improve the overall tonality.

Even though he was in his late fifties when he painted this river scene, Jan van Goyen never ceased to explore the effects of light and atmosphere along the canals and riverbanks of his homeland, and his evocation of their atmosphere remains unparalleled. Indeed, his late paintings from the 1650s number many of his greatest works. In many late pictures such as this Van Goyen returned to a more natural range of colours alongside the near monochromatic palette he had adopted in many works since the beginning of the decade. The painting's design is built around a strong receding diagonal, a tried and tested compositional scheme that he had adopted in many similar river landscapes from the 1630s onwards.1 As always Van Goyen sought to enliven the surface of his panel with a variety of painterly effects, using broad brushstrokes for the clouds and shorter touches to indicate the ripples of light and shade in the water beneath. In the present panel, the distant church spire, the sails of the moored riverboats and the weathered houses are all familiar compositional elements employed here to enliven the horizon line. All of these motifs are composed but they were always rooted in Van Goyen’s own numerous drawings made from nature; a precarious dovecote similar to that found in the centre of the picture, for example, can be found in a pen and grey wash drawing made two years earlier in 1652.2

Van Goyen’s personal fortunes were also at a particularly low ebb at the time he painted this picture. Although a highly prolific and influential painter (some 1200 paintings and 800 drawings by him are known), having rashly speculated in tulip bulbs during the period of ‘tulip mania’ or tulpenmanie he never managed to recover financially when the market crashed in February 1637. Despite his seminal importance as the most important pioneer of naturalistic landscape painting in Holland, Van Goyen’s paintings did not fetch high prices during his own lifetime. In 1652 and again in 1654, the year of this painting, he had been obliged to sell his possessions at public auction. He died two years later in straitened circumstances, when his widow was obliged to sell his remaining assets, including his house.