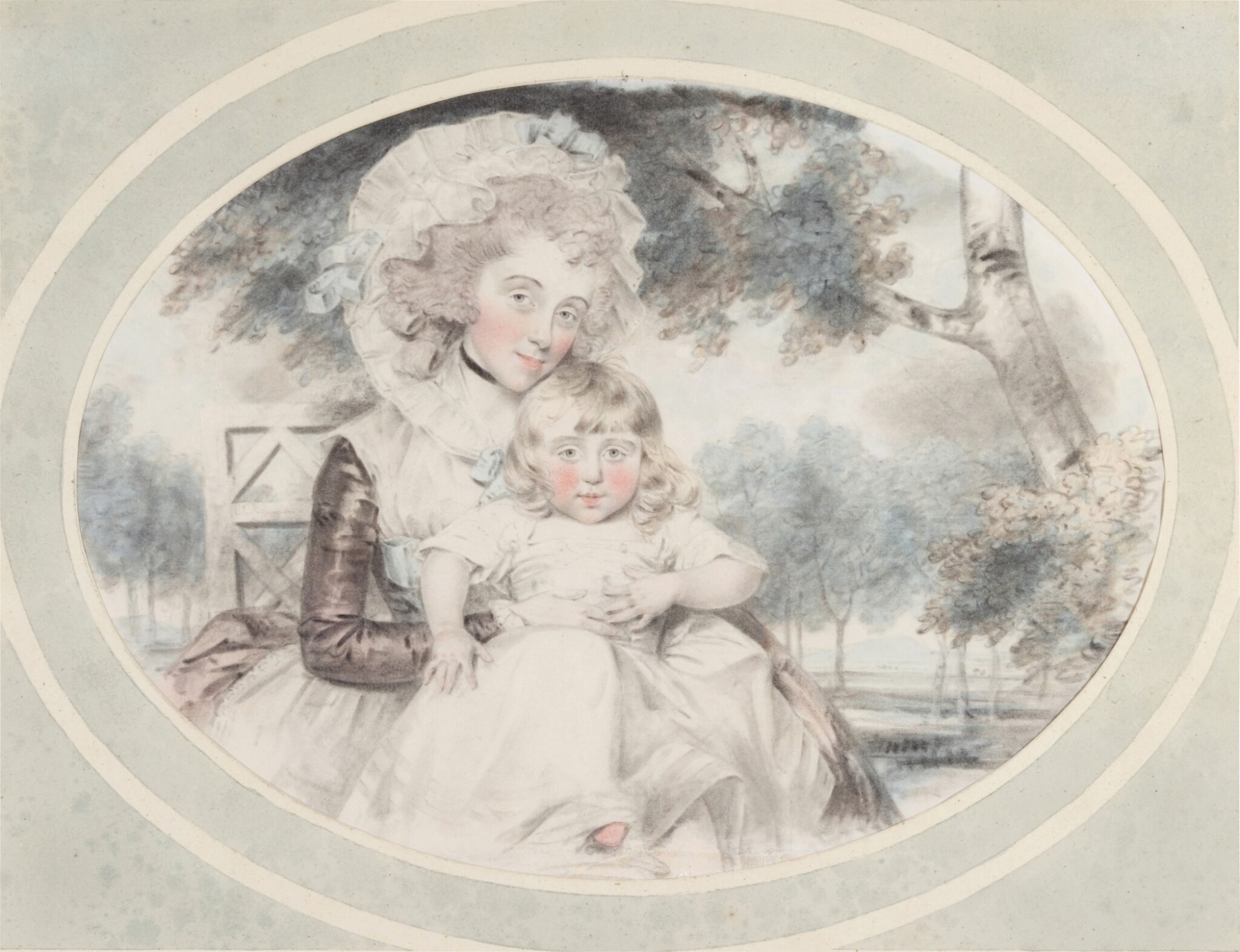 Watercolour and coloured chalks over pencil;

This work is in overall good condition. There are a number of minor creases towards the lower edge of the oval. The corners of the sheet have been cut, and the work is laid down to a conservation quality 'Japan' paper. There is evidence of a minor mount stain (from a previous mount) which is now covered up by the present very elegant mount. The double portrait is presently well presented in a gilt-wood frame.

Sale, Bonham's and Brooks, 2 July 2001, lot 113;
with Judy and Brian Harden Portrait Miniatures
London, Philip Mould and Company, Downman In Vogue, 2020
Lady Hester was the third daughter of John Boldero and his wife Esther of Aspenden Hall, Hertfordshire. In 1771 she married Stephen Lushington 1st Bt (1744-1807), a Member of Parliament and Chairman of the British East India Company. Their second son, Stephen depicted in the present lot, became a Doctor of Civil Law, a judge and a Member of Parliament.

Stephen was educated at Eton College and Christ Church, Oxford, after which he was elected a fellow of All Souls. He joined the Inner Temple and was called to the Bar in 1806. In the same year, he entered Parliament as Whig member for Great Yarmouth and he spoke in the Commons in favour of the bill to abolish the slave trade in February 1807. A leading ally of William Wilberforce, Stephen played an active role in the anti-slavery cause throughout his life.

He held the post of MP for Ilchester in 1820 and subsequently represented Tregony, Winchelsea and Tower Hamlets. He attempted to propose motions to recognise the independence of South America from Spain (1820) and to abolish capital punishment (1840). He supported Catholic Emancipation and spoke in favour of repealing the civil disabilities which applied to Jews.

His legal career continued parallel to his political one. He advised Lady Byron to leave her husband and spoke in Queen Caroline's defence during her trial before the House of Lords. In 1838 Stephen was made a judge of the High Court of the Admiralty and Dean of Arches in 1858. He retired from all his judicial posts in 1867 due to ill health but retained the administrative office of master of the faculties until his death in 1873 at the age of ninety-one.