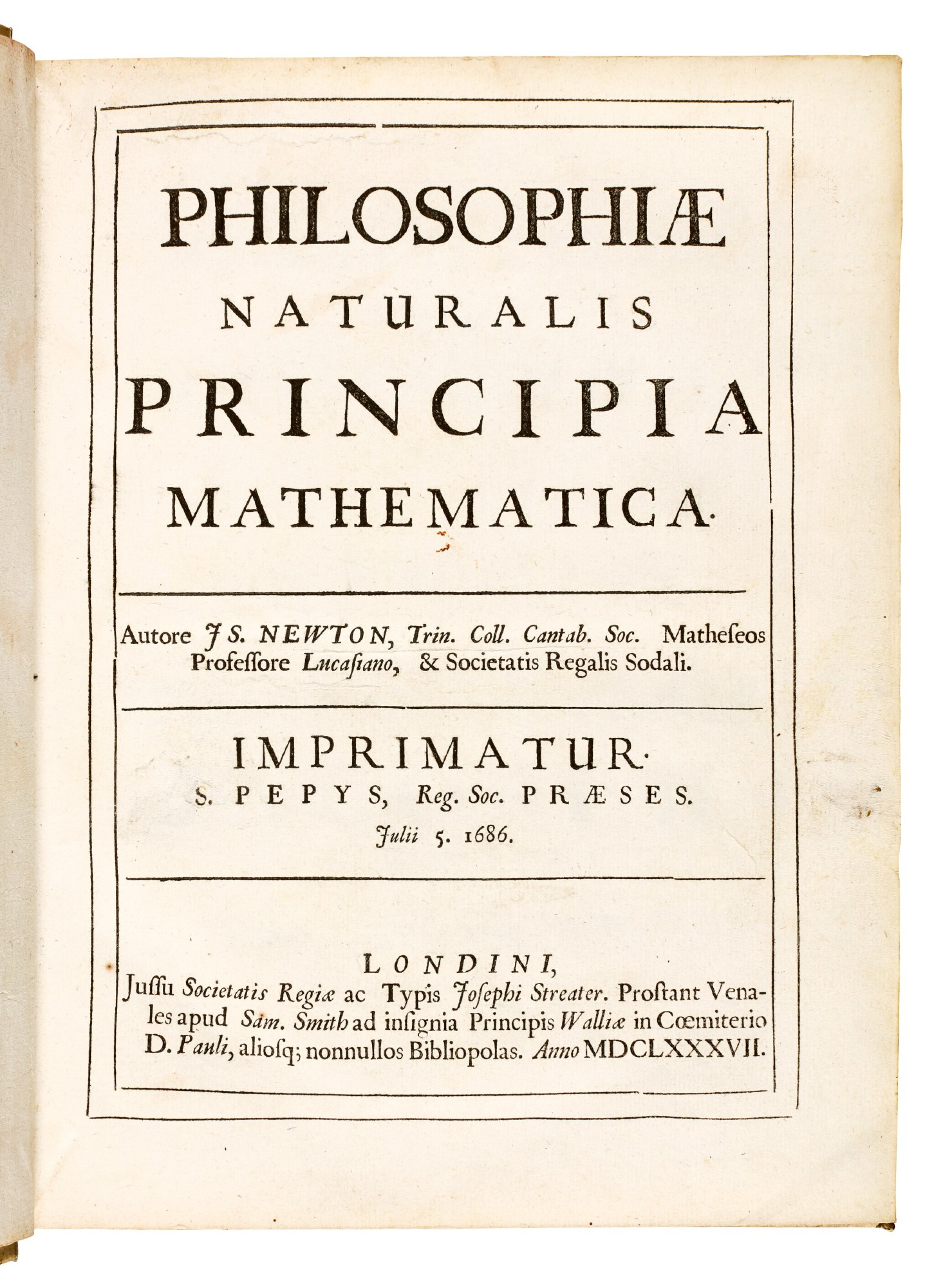 Philosophiae naturalis principia mathematica. London: by the order of the Royal Society, printed by Joseph Streater, to be sold by Samuel Smith and other booksellers, 1687

FIRST EDITION OF "THE GREATEST WORK IN THE HISTORY OF SCIENCE" (PMM). This copy has the cancel title-page naming Samuel Smith in the imprint, which is spread over three lines instead of two. It is often described as the second issue, produced for distribution by London booksellers, predominantly to the Continent, where Samuel Smith (also the printer of the Philosophical Transactions) did most of his business; approximately a quarter of extant copies have the imprint naming Smith. Macomber opines that both issues appeared simultaneously, though it seems that the copies with the shorter imprint were distributed first. This copy has Italian provenance stretching from an early date up to the present time.

The printing history of the Principia is recorded in the correspondence between Newton and Edmond Halley in 1686, following the presentation of the treatise at a meeting of the Royal Society, where it was decided that it should be printed "in a large Quarto, of a fair letter" (letter from Halley to Newton, 22 May 1686). Halley records the end of printing in his letter to Newton of 5 July 1687.

Newton's Principia, his first major publication, contained a new way of looking at the cosmos, solving the problems of planetary motion, along with his three laws of dynamics and the law of universal gravitation. Much of this is today considered standard and familiar, taught in all schools, yet at the time it was revolutionary and contrary to established scholarship. In particular, gravity was perceived on the Continent as a magical rather than a tangible force because it operates invisibly (as does magnetism, yet magnetism only operates within a limited area). Newton's mathematics, however, proved greatly influential on the Continent, even if his ideas of cosmology were initially subject to criticism by, among others, Huygens and Leibniz. His theory of universal gravitation was still not accepted by foreign scholars at the time of his death in 1727.

"For such is the mighty improvement made by you in the Geometry, and so unexpectedlie successfull the application therof to the physicks that you justlie deserve the admiration of the best Geometers and Naturalists, in this and all succeeding ages" (David Gregory, letter to Newton dated 2 September 1687).

This copy would seem to have arrived in Italy soon after publication. Rome was home to a group of scholars based at the Celestine monastery of Sant'Eusebio, centred on the Neapolitan Celestino Galiani (1681-1753), who carried out Newtonian and Cartesian research in the early eighteenth century (Galiani certainly had access to a copy of the Principia by 1708, but not before 1706). Galiani knew Sir Henry Newton (no relation), the British envoy to Genoa and Tuscany and a member of the Royal Society, who came to Rome in 1710, and William Burnet, a pupil of Newton's through whom he became a member of the Royal Society in 1705, who passed through Rome in probably 1708-1709. Although the Vatican had obtained a copy of this work shortly after publication in order to assess it, Newton never appeared on the Index of Prohibited Books, unlike Descartes.

It has not been possible to identify this copy in Macomber's census.

"coste 2-60", "Dr Petrus San lorenzo", inscriptions on inside front cover (the second obscuring an earlier inscription); acquired by 1983 (pencil inscription in Italian at end), thence by descent to the present owner