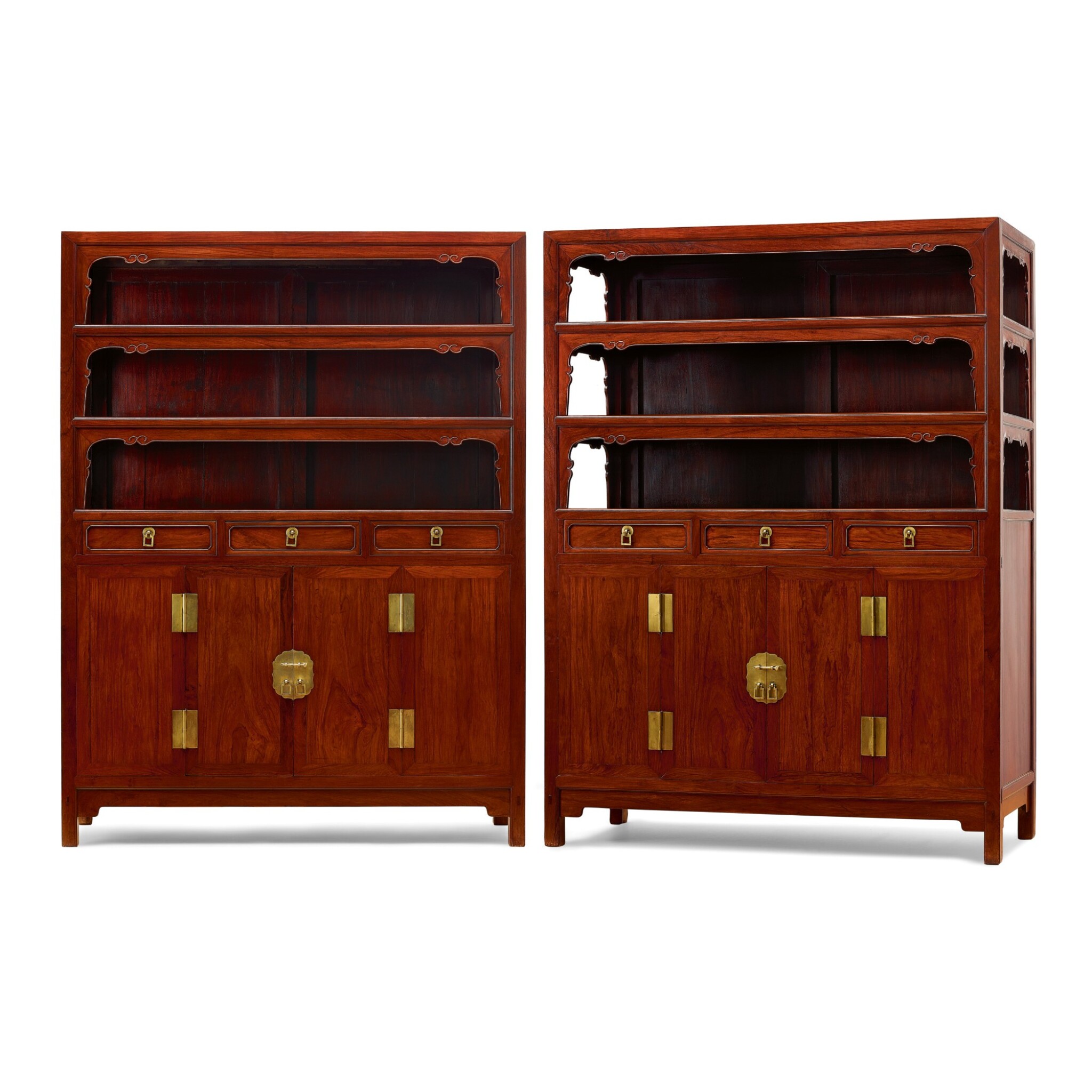 In overall good condition. The drawers are veneered; the shelves and back panels are made of tielimu; the back panels are movable, which are all part of the original manufacture. Some of the aprons on the narrow sides are later replaced. A rear foot of one cabinet restored.

Striking for their imposing size, this pair of cabinets with open shelves demonstrate the exceptional skill of 17th century furniture makers in their ability to take full advantage of the vivid colours and patterns of precious hardwood.

This type of cabinets with multiple open shelves, known as Wanligui (Wanli period cabinets), is highly unusual. First appearing in the mid- to late Ming dynasty, they were generally kept in the scholar’s studio, where their arrangement either side by side or on opposite walls, created a visual symmetry sought after in Chinese room design. The top shelves were used for storing books and scrolls as well as treasured antiques, while writing implements, such as brushes and ink, were kept inside the drawers. The sturdier and enclosed lower were on the other hand, used for storing more fragile objects or tea utensils that could be brought out in the presence of guests. Referred to as lianggegui by modern cabinet makers, this type of bookshelf seldom appears on contemporary woodblock printed books, attesting to its rarity.

The display and storage of books in the scholar’s studio was of great importance as it was indicative of the level of education and cultural refinement of the master of the house. The scholar Gao Lian (1573-1620) in his Zun sheng bajian [Eight discourses on the art of living], first published in 1591, mentions that bookcases “should be used for placing one’s favourite books, which could be Confucian classics, poems, Buddhist scriptures or for important medical literature and calligraphy”. For the Ming dynasty scholar Wen Zhenheng (1585-1645), it was however important not to display too many books and scrolls “otherwise the room looks like a bookstore” (Wen Zhenheng, Chang wu zhi [Treaties on superfluous things], translated in the catalogue to the exhibition Beyond the Screen. Chinese Furniture of the 16th and 17th Centuries, Museum of Fine Arts, Boston, 1996, p. 85).

Cabinets with three open shelves are very rare and no other closely related example appears to have been published. This pair of cabinets share similarities with a smaller cabinet fashioned with two open shelves from the Qing Court collection and still in Beijing, illustrated in Wang Shixiang, Classic Chinese Furniture. Ming and Early Qing Dynasties, London, 1986, pl. 138.