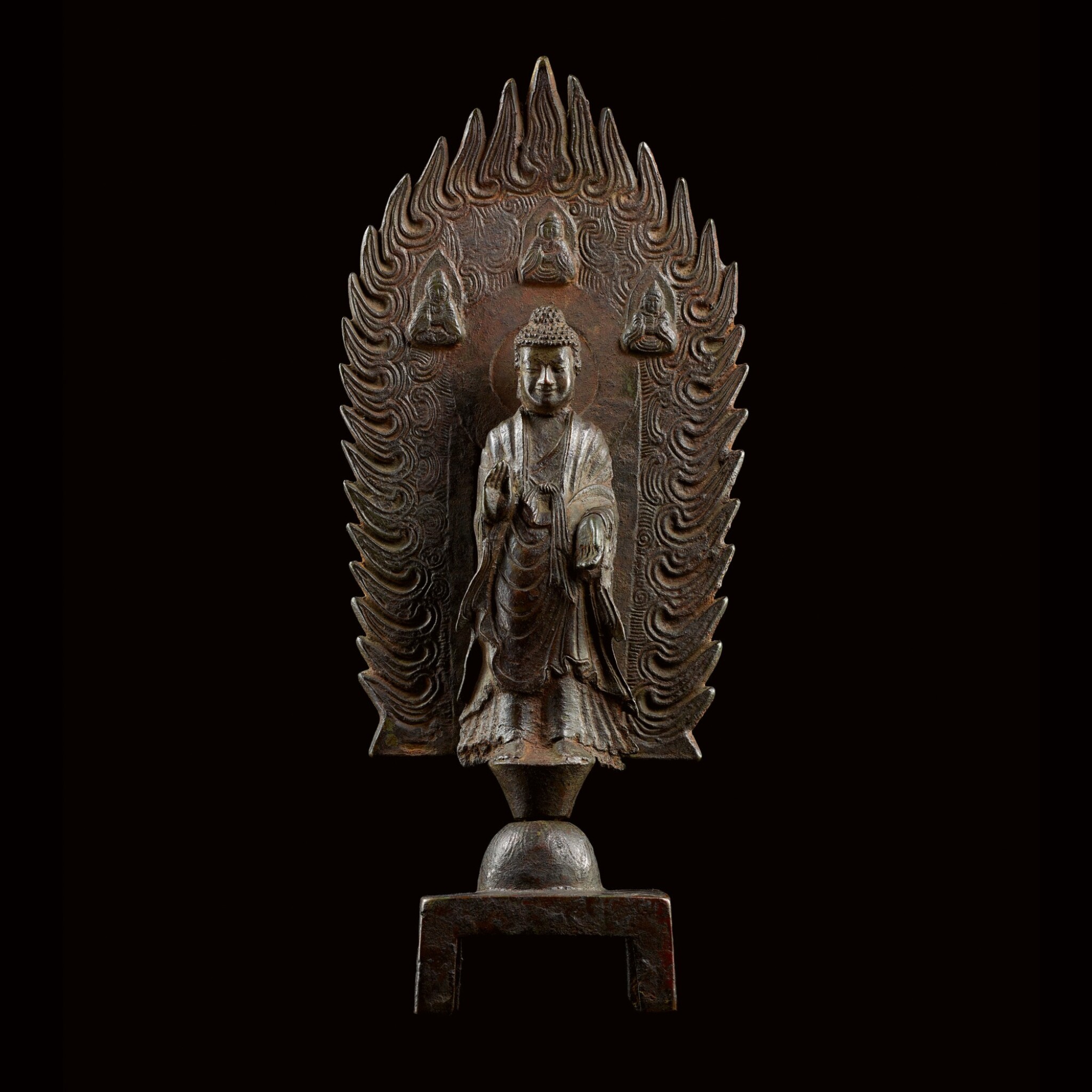 NORTHERN WEI DYNASTY, DATED 3RD YEAR OF THE JINGMING PERIOD (IN ACCORDANCE WITH 502)

very finely cast as Maitreya standing sturdily on a tapering base supported on a hemispherical lotus base atop a four-legged plinth, all against a mandorla bordered with ferocious flaming swirls and cast in low relief with three smaller seated images of Buddha, the main standing figure depicted with the right hand raised in abhaya mudra and the left in varada mudra, rendered dressed in long flowing robes cascading in voluminous folds over the arms and lower body and tied with a knot near the chest, the soft serene countenance surmounted by a domed ushnisha and framed by a wide halo cast in low relief on the mandorla, the reverse of the mandorla incised with a dedicatory inscription dated to the 20th day of the fourth month in the third year of the Jingming period (in accordance with 502), which can be translated as 'Disciple Huangfu Gaimin of Beilinfeng Village patronising a figure of Buddha, in commemoration of his deceased parents, with hope that the family will live in peace and always take refuge in the Three Jewels'

As visible in the catalogue photos, there is oxidisation to the surface. There are small bruises at the extremities and pedestal. The pins that secure the mandorla to the reverse of the figure have been replaced.

A Swiss private collection, by repute.

Maitreya, Buddha of the Future

A Masterpiece of a Turbulent Era

Encapsulating the finest qualities of Northern Wei sculpture, with its sensitive modelling inspired by the art of Gandhara, and crisp articulation of the aristocratic features of the Buddha in a powerful standing posture, this magnificent bronze sculpture is amongst the largest of all Northern Wei bronze Buddhist sculptures recorded in private hands. Preserved in near pristine condition, depicted standing majestically on a lotus pedestal against an elaborate flaming mandorla cast with three smaller images of Buddha, the figure exudes serenity in its captivating smile.

The incised dedicatory inscription on the reverse of the mandorla, dated to the 20th day of the fourth month in the third year of the Jingming period (in accordance with 502), can be translated as:

'Disciple Huangfu Gaimin of Beilinfeng Village patronised a figure of Buddha, in commemoration of his deceased parents, with hope that the family will live in peace and always take refuge in the Three Jewels'.

The inscription refers only to ‘Buddha’, but the iconography of the sculpture places it in the rich historic tradition of depicting Maitreya, the Buddha of the Future. The precise standing position and mudras are also found on the famous altarpiece dedicated to Maitreya in the collection of the Metropolitan Museum of Art, published in Denise Patry Leidy and Donna Strahan, Wisdom Embodied: Chinese Buddhist and Daoist Sculpture in the Metropolitan Museum of Art, New Haven, 2010, cat. no. 7a. The altarpiece is incised with an inscription, dated in accordance with 524, which identifies the central figure as Maitreya. Like the current sculpture, the central figure is depicted with the attenuated physique and heavy, concealing drapery characteristic of the court style of Luoyang in the early 6th century. Both are depicted adorned in long rectangular shawls over undergarments that include vests tied neatly at the front, the hems cascading in schematised folds, the hems flaying at the sides. Both figures are also depicted against elaborate flaming mandorlas, shown with the same raised right and lowered left hands, a combination of gestures associated with Amitabha Buddha descending from his Pure Land (Sukhavati) to the earthly world to rescue the souls of the deceased and bring them to paradise. It is likely that both the altarpiece and the current sculpture were intended to represent Maitreya Buddha descending from the Tushita heaven. The dedicatory offering of this magnificent sculpture from Disciple Huangfu Gaimin can thus be seen as a wish for his parents to ascend to join an assembly of divinities in Maitreya’s Tushita heaven.

Under the patronage of the ruling Northern Wei dynasty, founded by the Tuoba clan of the Xianbei ethnic group, Buddhism flourished in China. The imperial family of this foreign dynasty actively supported the religion and regarded it as a means to legitimise their rule in a society dominated by Han Chinese values. Buddhist images proliferated in this period, and different phases of development can be discerned. The influence of Gandharan and Central Asian sculptures, at first taken as models to follow, gradually developed into a style that also took into consideration Chinese aesthetic language. During the reign of Emperor Xiaowen (r. 471-499), this process of sinicisation accelerated as the capital was moved from Datong to Luoyang, the former capital of the Eastern Han dynasty.

Emperor Xiaowen actively sponsored the assimilation of Han Chinese costumes on members of the Tuoba clan, a trend that continued under his successor, Emperor Xuanwu (r. 500-515) when the current sculpture was created. Dated in accordance to 502, this sculpture carries stylistic elements that represent this artistic shift. The figure’s voluminous body and its aristocratic pose display the continued influence of Gandharan and Central Asian imagery, while the large flaming mandorla and the Buddha’s blissful smile would have made this figure more appealing and accessible to a Chinese devotee. The tall, thin body evidence an increased interest in verticality, while the crisp rendering of the figure’s robes that falls in regular pleats and the incised flames on the mandorla are endowed with a rhythmic, almost calligraphic quality.

The style of the robes is known in China from the late 4th or early 5th century as Udayana, where the Buddha's outer garment covers both shoulders and falls in stylised undulations, a style derived from the Buddhist sculpture of ancient Gandhara and early Central Asian cultures, where images of Buddha so successfully fused influences from the Hellenistic world with the rich artistic tradition of Indian sculpture. Udayana is the ancient name of an area thought to be present-day Swat Valley, Pakistan, which was part of the early Gandhara region. Buddhist images displaying robes with pronounced folds, such as the colossal 3rd or 4th century sculptures once standing at Bamiyan, were accessible to pilgrims via the Silk Road and the style thus found its way to China. It is recorded that the Chinese traveller Faxian visited this site sometime around the beginning of the 5th century. Testimony to this migration of style is seen in the famous gilt-bronze figure in the Metropolitan Museum of Art, dated 486 and identified by inscription as Maitreya, with the robe falling from the shoulders in stylised undulations, published in Denise Patry Leidy and Donna Strahan, op.cit., cat. no. 4.

The messianic Maitreya cult gained prominence in northern China during the instability of the fifth century. Maitreya Buddha is the only divinity in Buddhism revered as both a bodhisattva in this cosmic era, and as a Buddha in the next. As a Buddha, he has the ability to create and maintain a Pure Land; as a bodhisattva, he inhabits the Tushita heaven. In the instability of the era of the Southern and Northern dynasties, characterised by continued warfare and dynastic change, there was a heightened appeal to the notion of paradisiacal realms where devotees could escape the harsh realities of daily life and look forward to a promising future. On the current sculpture, Maitreya is joined above by representations of Buddhas, probably Buddhas of the Past, complementing his role as triumphant saviour and linking his advent to the culmination of history, or the fulfillment of the linear progression of all past existences.