PROPERTY FROM A PRIVATE COLLECTION 私人珍藏 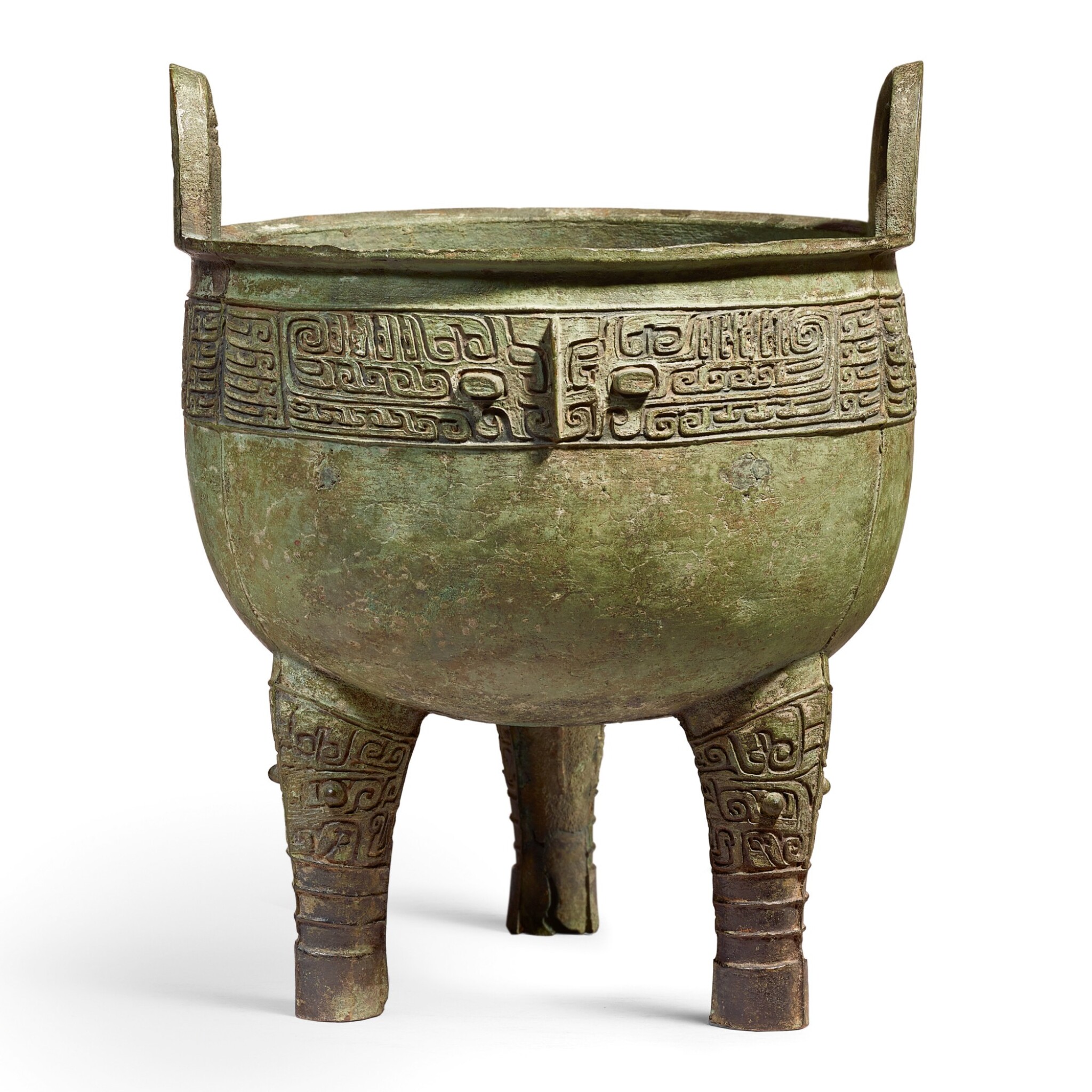 PROPERTY FROM A PRIVATE COLLECTION 私人珍藏

the deep U-shaped body cast below the everted rim and a pair of upright loop handles with a single wide register of three taotie masks bisected by flanges, and comprised of a pair of protuberant eyes and hooked ribbons cast with C-scrolls indicating horns and jaws, all above three slightly tapered legs, each with a further taotie mask with bulging eyes above three raised filets, the surface with a smooth pale gray-green patina, one side of the body with an inscription reading Qi fu yi

The X-ray reveals an approx. 6.3 cm crack with small associated areas of losses and restoration to part of the base. There is an approx. 3.8 cm crack to another area of the base that has not been filled in. Other small typical areas of restoration. One leg has an approx. 2.5 cm crack, from an original casting flaw. The X-ray also reveals three pictograms visible below the patination on the vessel reading qi fu yi.

This impressive vessel has an imposing profile, achieved through its deep form, powerful thick legs and dramatic zoomorphic masks with prominent bulging eyes. The sharp-edged crispness of the design and its notable level of preservation, evidence the Shang caster’s technological sophistication and bold creativity. The section-mould method preferred by Shang casters and used for making this vessel, allowed craftsmen to showcase their virtuosity and create ever more complex but coherent designs by carving directly on the mould. This technique also eliminated the need to alter the decoration by cold-working the metal after the initial pour, thus ensuring it retained its striking sharpness.

The animal mask band on this vessel is unusual: its level of intricacy and presence of vertical quills derives from Style III in Max Loehr’s classification of Shang bronzes. This style began to emerge in the latter period of the Zhengzhou phase. The strong profile of this piece, and its prominent legs, however suggest a later date in the Anyang period. Anyang bronzes, which were produced between c.1300 to c.1030 BC, when the Shang capital was moved to Yinxu, in present-day Henan province, represent the pinnacle of Shang metalworking tradition.

Vessels of this form and design are rare although two larger ding of this type, were unearthed in Liquan county, Shaanxi province, and illustrated in Shaanxi chutu Shang Zhou qinngtongqi [Bronzes of Shang and Zhou dynasties unearthed in Shaanxi province], Beijing, 1979, vol. I, pls 57 and 58; and an even larger example was discovered at Renja village, in Fufei county, illustrated in Li Xixing, The Shang Bronzes, Xi’an, 1994, pl. 3. Another larger ding with a related motif, was discovered at the tomb of Fu Hao, royal consort of king Wu Ding, in Anyang, and published in Zhongguo qingtongqi quanji [Complete collection of Chinese archaic bronzes], vol. 2, Beijing, 1997, pl. 8.

For an earlier version of this form and design, see a ding unearthed in Pinglu county, Shanxi province, and illustrated in ibid., vol. 1, pl. 33

Ding are among the most significant products of the Bronze Age in China, associated with royal power and authority and legitimacy to the throne. According to legend, King Yu, founder of the Xia dynasty, cast nine large bronze ding, one for each of the nine provinces in his kingdom. This form, which continuously evolved over the centuries, derived from pottery tripod vessels made as early as the Neolithic period. Used during ritual ceremonies as food or cooking vessels, ding were very popular in the Shang and Zhou dynasties, as large numbers have been found in royal tombs. The tomb of Fu Hao in Anyang, for example, contained over twenty-six vessels of this type.