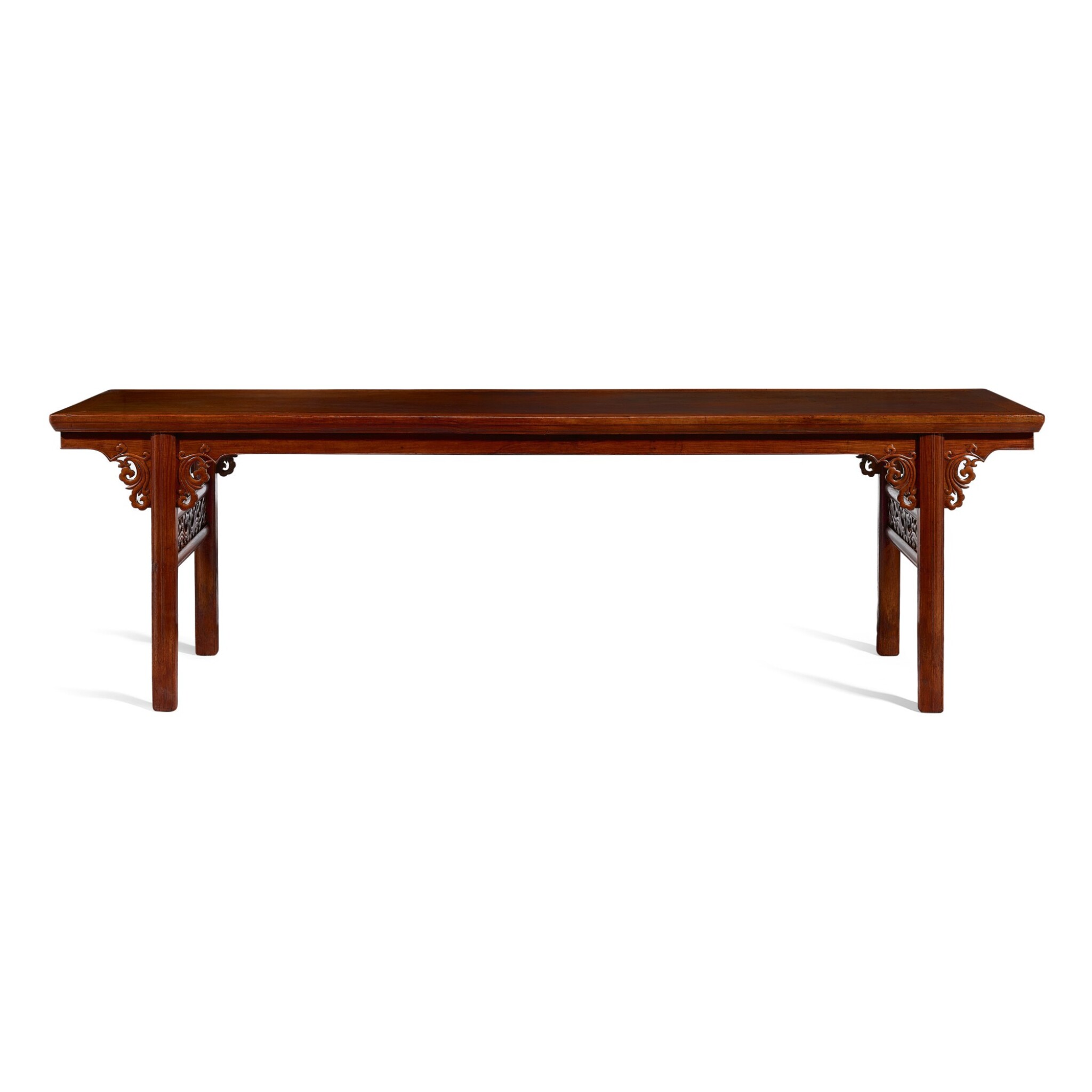 the rectangular framed top of mitre, mortise and tennoned construction inset with a tielimu panel forming a flush surface, above plain aprons and foliate-form spandrels, continuing to beaded legs of rectangular section, joined on the shorter sides by two openwork panels carved with a pair of confronting stylised phoenix

This elegant and perfectly proportioned table is striking for its exquisitely carved design. From the curling leaves on the spandrels, the confronting phoenix between the legs and the beaded edges, this table testifies to the exceptional skill of Chinese woodcarvers and cabinet-makers in the 17th century.

The elaborately carved surfaces make this table particularly rare, as tables of this form are generally undecorated, such as lot 64 offered in this sale. While no closely related example appears to have been published, this piece shares similarities with a smaller painting table with phoenix spandrels and the stretchers carved as confronting chilong, from the collection of S.Y. Yip, sold in these rooms, 7th October 2015, lot 125. Examples of tables with elaborately carved spandrels, but plain stretchers are known: see one sold in our New York rooms, 17th/18th September 2013, lot 210; and two sold at Christie's New York, the first from the collection of Mr and Mrs Robert P. Piccus, 18th September 1997, lot 15, and the second from the Gangolf Geis collection, 18th September 2003, lot 39.

Tables of such prominent length and depth were used in the study as modern desks. They were designed to be both functional and aesthetically pleasing, and were considered the most significant piece of furniture in the scholar's studio. Their height was carefully calibrated to allow a scholar or artist to stand and freely move his brush, and they were generally devoid of drawers or stretchers on the long sides, which would have made them uncomfortable when seating on a chair. The wood from which they were fashioned was of great importance for scholars, who sought strength and beautiful grain patterns. The clever combination of the golden-hued huanghuali and darker tielimu for the table top of this piece creates an attractive contrast that would be particularly desirable.

Tables with legs not at the corners but recessed represent a classic and highly recognisable Ming dynasty design. They have historically been referred to as 'character one' tables, as the Chinese character for the word 'one' is written as a single horizontal stroke, giving a graphic image of their form. Inspired by classical Chinese wood buildings, this design was very popular from the Song dynasty (960-1279) onwards, often appearing on woodblock printed books and paintings. One of the most enduring and successful designs in classical Chinese furniture, the spare minimalist lines of these tables have a timeless elegance.