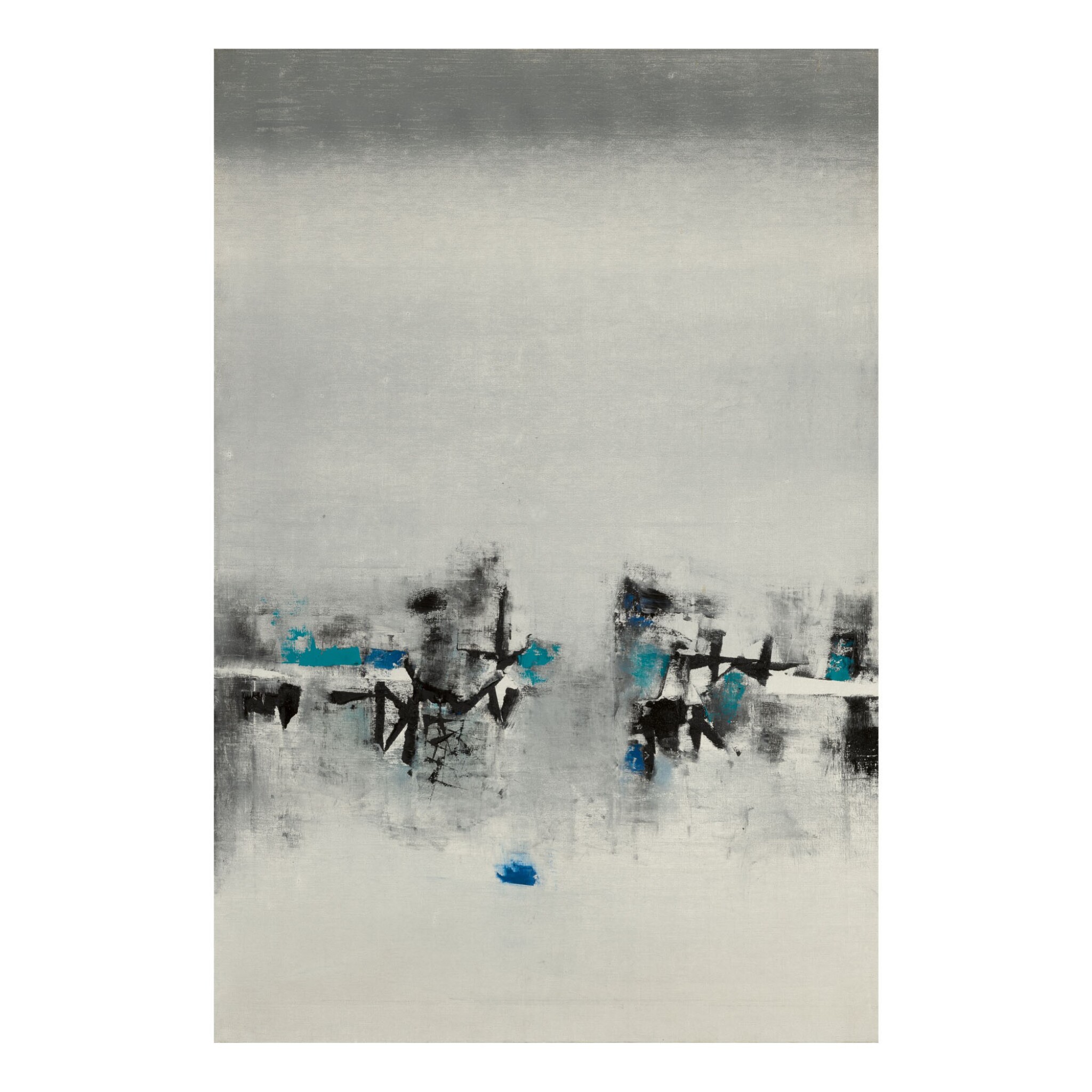 Signed and dated in Devanagari and 'Gaitonde 63' on reverse

Acquired in Bombay in the 1960s

Vasudeo Santu Gaitonde is renowned as India’s pioneering abstract artist, though he preferred the term “non-objective” for his work. Born in Nagpur, Gaitonde studied at Bombay’s J.J. School of Art and in the 1950s became associated with the artists who led the Progressive Artists' Group, founded in 1947 as the first formal art group or movement of post-independent India. Like his Progressive artist peers, Gaitonde began his career as a figurative artist, but throughout the 1950s he began to reduce the imagery and iconography in his paintings, even as he still made reference to organic objects in titled works such as The Bird and an Egg (1957). His final canvases that contain spare representational images were painted in the last years of the decade. From this time onwards, Gaitonde focused on process rather than image, using palette knives and - beginning in the mid-1960s --paint rollers, and applying pieces of newspaper to create semi-geometric forms on his canvases.

By the early 1960s, Gaitonde’s work was resolutely non-figural. He began to work towards stillness in his paintings through a meticulously considered approach to line and color, a quest that would continue for the rest of his career. The formal developments of Gaitonde’s practice in this period matched the aesthetics and inquiries of Zen Buddhism, a source of insight after the artist unexpectedly found a book on the subject in a Bombay bookstore in 1959. This was particularly notable because Gaitonde’s artist peers in Bombay largely looked West towards artists like Paul Klee and movements such as Expressionism for discourse and inspiration, while he uniquely began to integrate ideas born in East Asia.

Some of Gaitonde’s early non-objective paintings evoke the feeling of a landscape, especially his canvases of the early 1960s where gradations of color and geometric forms coalesce almost as a ‘horizon line.’ In the present work, just as in the 1962 Untitled canvas acquired by the Museum of Modern Art in 1963, this horizon appears almost as an expanded zone. Here, it is articulated through restrained applications of two shades of blue, geometric elements in black that read as nearly graphic, and an otherwise muted palette led by shades of gray. This field is broken near the center of the work, drawing the viewer’s eye to a darker blue form in the lower central register. This work is also marked by a modulated gray band at the top of the canvas, creating a tension with the horizon field below. The decision to transform the top of the canvas into its own field is also an early example of one of Gaitonde’s lasting approaches to vertical canvases, which can be marked by parallel bands of color or abstract forms.

It is worth looking into Gaitonde’s milieu at this time. From around the late 1950s, he maintained a studio at the Bhulabhai Desai Memorial Institute in South Bombay, an important interdisciplinary cultural center where he worked alongside fellow artists MF Husain, Adi Davierwalla, Homi Patel, Prafulla Dahanukar, Jatin Das and Nasreen Mohamedi as well as other personalities such as theater aficionado Ebrahim Alkazi and music maestro, Ravi Shankar.

‘The Bhulabhai Memorial Institute was clearly a nerve center where the variegated strands of artistic creativity enjoined to spark new ideas and energize both the Bombay art scene and the artists contributing to it. It certainly provided Gaitonde with a stimulating atmosphere. [It also] … afforded Gaitonde the space and the solitude that he yearned for… Gaitonde’s favorite spot on the sprawling premises … was a bench near the stairs, where he would spend hours watching the lapping waves and the setting sun in utter silence.’ (M. Menezes, ‘The Bhulabhai Years,’ Vasudeo Santu Gaitonde: Sonata of Solitude, Bodhana Arts and Research Foundation, Mumbai, p. 110, 112)

‘Jatin Das, …recalls standing with Gaitonde as he watched the sea from the institute. At low tide, when the water retreated, it thrust the black rocks on the shoreline into sharp relief. Das is convinced that it is this combination of black rocks juxtaposed against a shimmering white sea that sowed the seeds for Gaitonde’s abstract works.’ (M. Menezes, ‘The Bhulabhai Years,’ Vasudeo Santu Gaitonde: Sonata of Solitude, Bodhana Arts and Research Foundation, Mumbai, p. 112)

The palette and composition of this work also evokes the 1961 work Painting in White in the collection of the Tata Institute of Fundamental Research (TIFR), Mumbai, which uses two shades of blue to define a composition otherwise articulated through white, gray, and black. The engagement of negative space relates further to Gaitonde’s 1964 Abstract, also in the collection of the TIFR, which extends the relationship between gesture and negative space defined through a central line. In this period, Gaitonde alternated between horizontal and vertical formats, with works such as this painting anticipating the orientation he preferred in his later paintings. As Gaitonde painted only five or six exacting works a year, each painting represents a specific and dedicated relationship of form, color, and consciousness.

Like artist colleagues Tyeb Mehta and MF Husain, Gaitonde won a prestigious Rockefeller Fellowship, through which he lived in New York in 1964. During Gaitonde’s time in the city, he stayed in the Chelsea Hotel, a locus of the city’s art, music, and literary communities. By then, there was already a brief history of his work in New York having had exhibitions at the Graham Gallery (1959) and Gallery 63 (1963); he went on to have an art exhibition at the Willard Gallery in 1965 that was praised in the NYTimes. In terms of his visibility in the city’s art scene, Gaitonde’s experience was unique among the Indian artists who traveled to New York on this fellowship, which can be attributed both to his advancement as an artist by this time as well that his practice aligned more readily with Abstract Expressionism and the current avant-garde.

While there has been international attention on forms of abstraction in modern Indian art in the past decade, Gaitonde pioneered this movement at a time when figuration was nearly exclusively dominant, working quietly throughout his life in Bombay and then in Delhi, and mentoring artists such as Nasreen Mohamedi who would go on to develop her own minimalist language. Even as Gaitonde’s place in the Indian canon is now well established, his work naturally elicited comparisons with Western artists of his time, particularly Mark Rothko’s color field paintings. Philosophically his work connects to the spiritual aspirations of certain abstractionists in early 20th century Europe, where artists including Piet Mondrian, Wassily Kandinsky, and Kazimir Malevich sought autonomy and a certain meditative balance through their canvases.