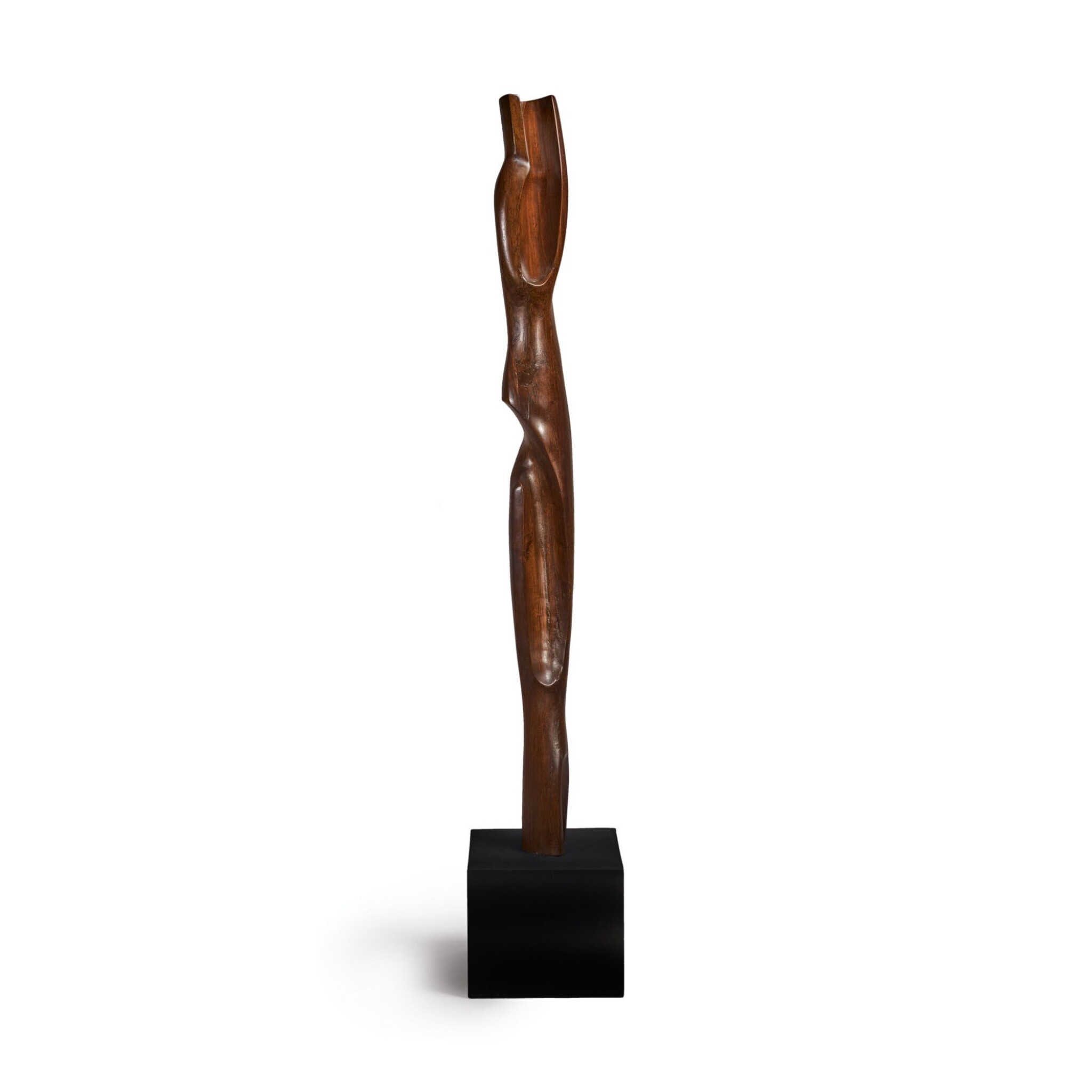 This is a unique work

Acquired in Bombay in the 1960s

Adi Davierwalla was born in 1922 and began his professional life as a chemist, a career that his family wished him to pursue. He wrote that “every moment of my time outside factory hours was devoted to reading, listening to music and drawing.” (A.M. Davierwalla quoted in E. Alkazi, A. M. Davierwalla, Art Heritage, New Delhi, 1979) Even whilst at school Davierwalla produced small wood carvings with a pen-knife. Unsurprisingly, when he started his artistic career, he turned to wood as a medium – an ancient traditional material of India.

Davierwalla made his debut as a professional sculptor with a one-man show at the Jehangir Art Gallery in 1956. Three years later, he gave up his day job entirely to devote himself to his sculpture. This was almost after a decade of having created sculptures and receiving critical acclaim for his work from institutions such as the Bombay Art Society and All India Sculptors' Association.

‘It is significant that, although completely self-trained, he did not follow the contemporary fashion of sculpting in plaster and preparing a mold for the final bronze product but took to carving directly in wood, stone and marble. This brought him face to face with the essential nature of a sculptor’s work, an exploration of form in solid material informed by an empathy with the character of the latter, an understanding of organic structure and the scope it offered for an interplay of mass (including so-called empty space), volume and line. (D. Nadkarni, ‘The Art of Davierwalla,’ Lalit Kala Contemporary 10, New Delhi, September 1969, p. 21)

Dryad from 1961 evokes an eternal quality in its solidity and curvilinear formation. Decidedly modern, and despite its essentially abstract form, it is nonetheless endowed with what cultural theorist, Nancy Adajania describes as 'a human-like quality- a hybrid between a human and arboreal anatomy.'

'Davierwalla did not hold fast to any single material or style. In the earlier years he used stone and wood gradually trying other materials including lead, aluminium, steel and plastics…. his sculptures are formed by an assemblage or putting together of units. Thus, they are jointed and have a jointed character like the bodies of crustaceans and insects...’ (J. Appasamy, 'A.M. Davierwalla,' Lalit Kala Contemporary 21, New Delhi, April 1974, p. 37)