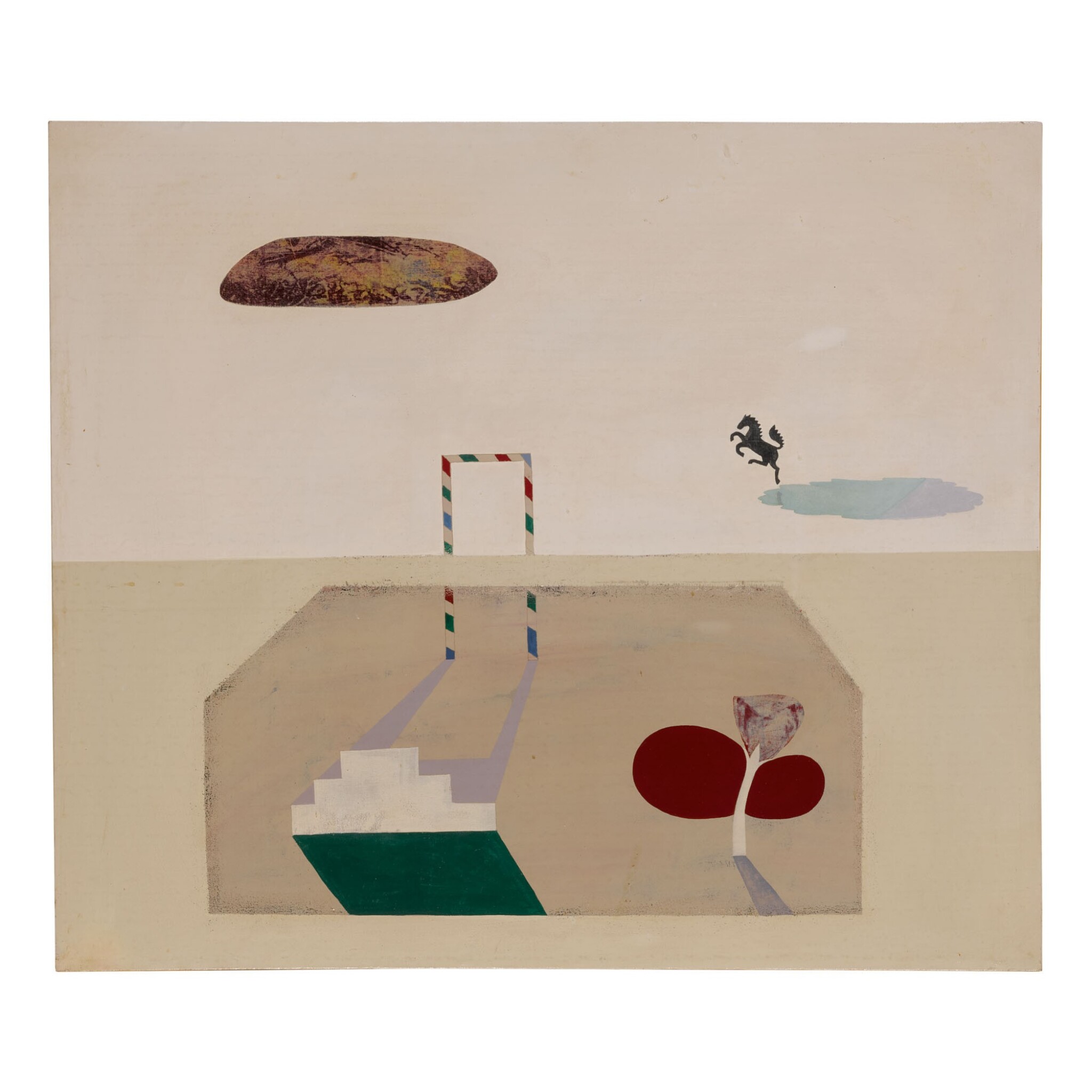 Gifted to the Usher Initiative III in 2019

The Usher III Initiative is a 501(c)(3) nonprofit medical research organization dedicated to finding a cure for Usher Syndrome type III, a devastating genetic disorder that causes deaf-blindness. By mid-life, people with Usher Syndrome type III are often completely deaf and legally blind. Currently there are no therapies available for this rare, disabling disease. The Usher III Initiative was founded by Cindy Elden and her father, the late Richard Elden. Over the past 16 years, research undertaken by the Initiative has led to the discovery of a potential treatment. Funding will support critical next steps as the Initiative moves towards clinical trials in patients with Usher III. All proceeds from this lot will help accelerate a treatment for those affected by Usher III.

Born to a family of artists in rural Maharashtra and Bombay, Prabhakar Barwe trained at the J.J. School of Art in the 1950s, on the heels of generation of the Progressive Artists' Group. There, he was inspired by artists including V.S. Gaitonde and Mohan Samant, and like many of his peers, he looked deeply at Expressionism and especially the work of Swiss artist Paul Klee as he embarked on a lifelong exploration of symbolism. Barwe was also engaged with the theory of British abstractionist Ben Nicholson.

Early in his career Barwe turned away from the figure, instead building his works around seemingly disparate objects carefully composed on the canvas. In this way Barwe sought to devise a universal visual language that would reject cultural and personal markers, a quest that continued throughout his life.

His work took a significant turn in the 1960s when he spent time in Varanasi at Pupul Jayakar’s Weavers' Service Centre, where artists worked with traditional craftsmen. He began to paint in enamel at this time in response to the lack of oil paints available. In Varanasi he was exposed to Tantric philosophy, which had a lasting impression on his work in his distillation of form and intent to empty his works of superfluous elements. It should be noted, though, that his canvases never took on the pure abstraction associated with the then-developing neo-Tantra movement in modern Indian art. Subsequently, Barwe took interest in Tao and Zen, lending to a more muted color palette in his later works.

The present work is a distinctive example of Barwe’s mature career style. It includes disparate iconographic elements floating and coexisting within a single frame, taking on an almost surrealist dimension in the juxtaposition of an equine creature leaping out of a cloud on a single hind leg with a gate, a large flower, and several geometric forms. Barwe makes no distinction between the representational and abstract elements in the composition, an important aspect of his practice that contributed a unique perspective to an ongoing dialogue in modern Indian art. A central horizon line with a slight difference in color above and below defines the picture plane, but Barwe consciously denies a one-point perspective that would lend to a greater sense of relationship among the objects represented. In this way, the viewer’s eye moves from one precisely painted form to the next, with only the partial reflection of the stripes of the gate seeming to indicate spatial relationships and an orientation.

The seemingly abstract title adds another element to the complexity of Barwe’s work, as he intended the viewer to puzzle over how word and image matched or didn’t (as was often the case). The artist took particular pride in the titles of his works, certainly connected to the fact that he was also a writer largely in Marathi, but occasionally in English. Kora Canvas, his book on the creative process, was published in 1990.