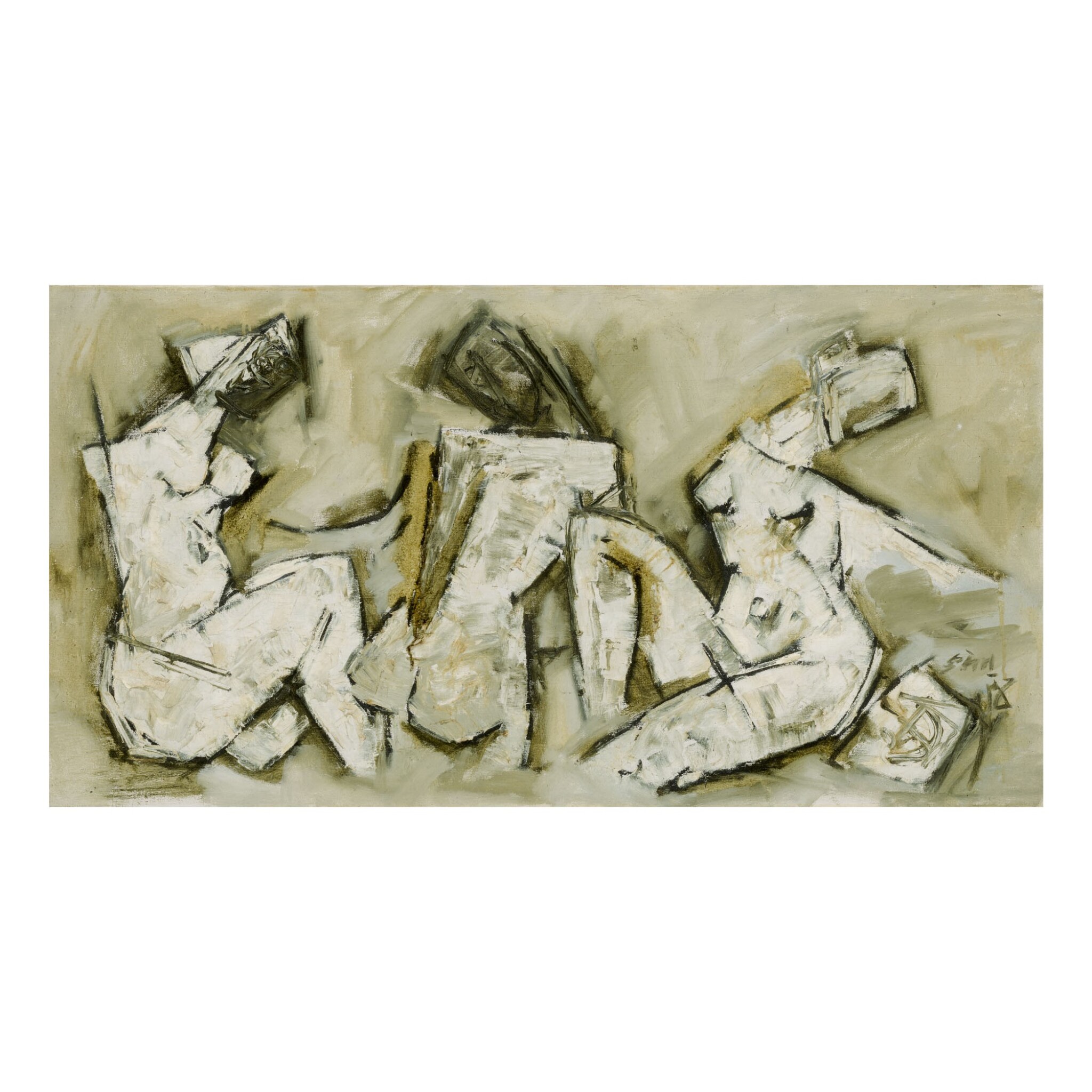 Maqbool Fida Husain, India’s most renowned and mythologized modernist painter in the decades after Independence, focused much of his oeuvre on figural compositions and epic tales as well as objects and narratives drawn from everyday life. Husain’s fame developed equally around his charismatic personality and for his prolific paintings, which sought to create an image of “Indianness” corresponding to a new modern and secular cultural identity.

A founding member of Bombay’s Progressive Artists Group established in 1947, Husain by the late 1960s had gained international recognition and settled into a peripatetic existence (he was rumored to never spend more than fifteen days in one place). Among many other exhibitions, Husain showed his work in the Venice Biennale (1953 and 1955), the Tokyo Biennale (1959, winning the International Biennale Award), and India House, New York (1964). A lifelong interest in cinema and a short-lived initiative by India’s Films Division enabled Husain to develop his first film in 1967, Through the Eyes of a Painter, which won a Golden Bear Award at Berlin’s annual film festival that year.

The present work is a distinguished example of a theme Husain would paint throughout his career, with his enduring interest in Indian mythologies and women. The first published version dates from 1951 in the collection of Ebrahim Alkazi. The composition hones on three iconic female figures who represent the triad of ideals for Indian women in ancient texts known as the shashtras -- Padmini (“she who sits on the lotus,” referring to the goddess Lakshmi), Mohini (“the essence of beauty,” and a female emanation of the god Vishnu), and Shankhini (powerful, representing the goddess Parvati). The painting reveals also Husain’s virtuosic ability to paint groups of figures in a way that both enables each her own autonomy and is rhythmic and connected.

While Husain is known for his vibrant colors, he sometimes elected to work in a more muted palette, including in other notable works from this period. Here (as in the 1951 version, but not in all other works with this theme), he has made a conscious choice to render the three goddesses in spare whites and grays. Through this, Husain makes an allusion to universal and idealized sculptures, which is reinforced through the rendering of these figures. In Husain’s stylistic and palette choices, the work also coincides with a parallel Greek mythological notion of Three Graces (representing charm, beauty, and creativity), a theme that Husain has also painted on occasion. At the same time, Husain makes direct reference to classical Indian sculpture and the aesthetics of traditional dance through the tribhanga pose, in which the body bends in alternate directions at the shoulders or neck, hips, and knees. As can be characteristic of Husain’s works in the 1960s, an abstract field of white and gray surrounds the central subjects, with figure and ground occasionally bleeding into each other.