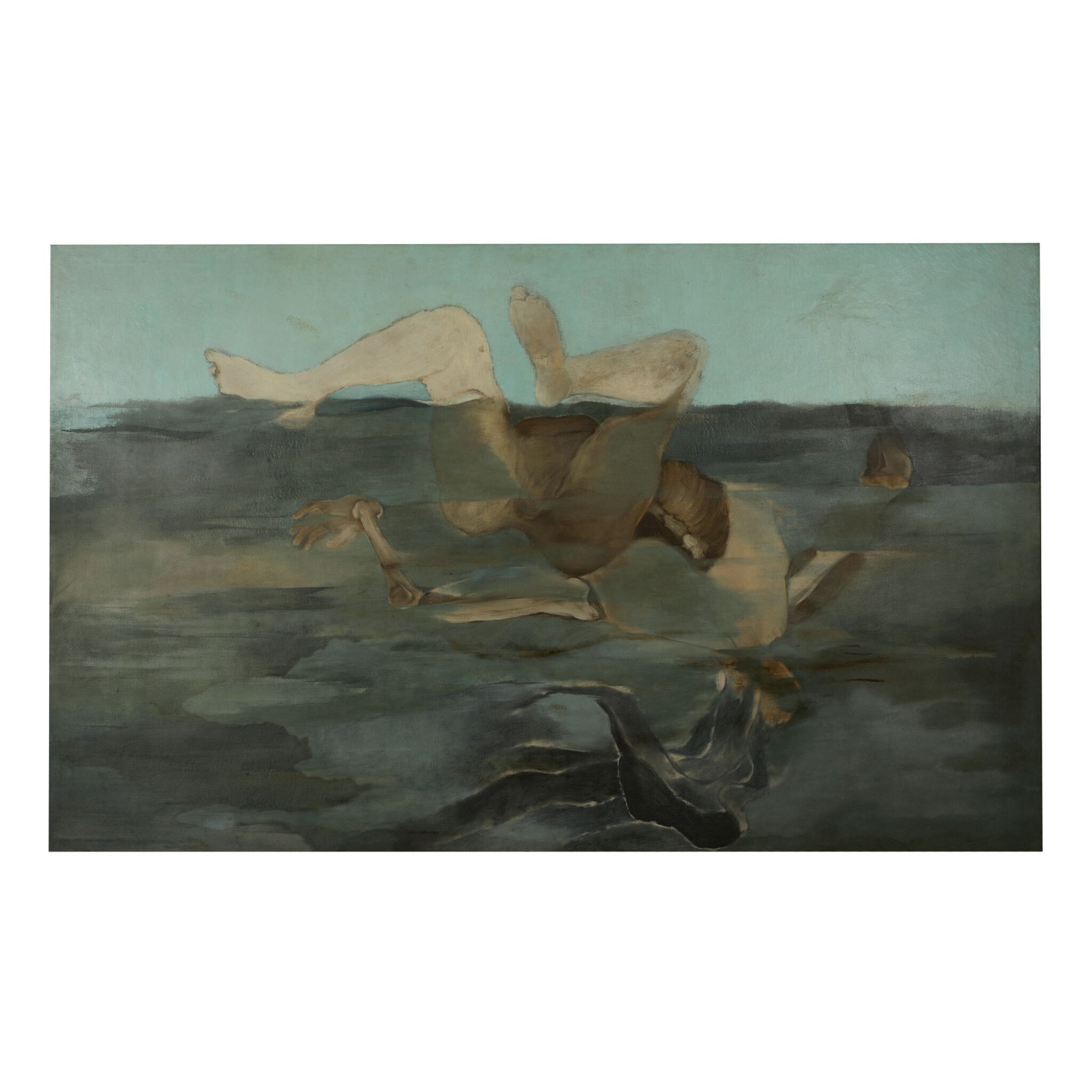 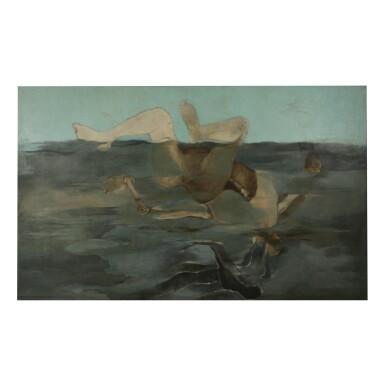 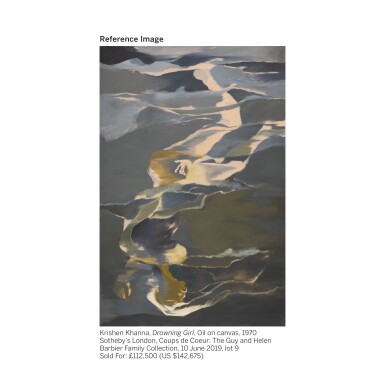 ﻿To request a condition report for this lot, please contact sarah.ritzmann@sothebys.com.

Acquired directly from the artist in the early 1970s

This painting is one of four works inspired by a haunting poem about Rosa Luxemburg by Bertolt Brecht, in which a girl is portrayed slowly descending into the sea. "The imagery was graphic and incisive and sufficiently persistent and inspired me to paint the girl in different stages of decay. I painted her, or bits of her, going down in a vortex. Somehow, I found it too beautiful and tasteful and not at all commensurate with the tragic figure in the poem. I painted another. This time the figure was delineated by a series of lines which got absorbed by a broad and active brush. Not bad but still lacking the poignancy of the poem. I tried to tell myself that it was futile to reconcile poetic truth with the truth of painting. How could I or anyone paint the line which gives moral coherence to the whole poem.

'And one day God forgot her. And she was carrion with carrion in the water.'" (Krishen Khanna quoted in C. Singh, 'Looking beyond his canvas: Krishen Khanna', The India Magazine, Volume 4, Number 10, September 1984, p. 19)

“I distinctly remember the works I created inspired by this poem. I made four paintings, but they were not created one after the other during the same period. There were time lapses in between. In these works, capturing the poetic essence is what I was after. In all the works the color palette was minimal. The structure was based more on the drawing than on the paint. Three of the works were in horizontal format and only one in vertical format. When I created these works I was obsessed with the subject of the "drowning girl”. I am deeply motivated by poetry and Brecht is a poet I admire greatly. I have been to Germany and visited the Brecht Archive and other institutions dedicated him there. I first read this poem in a book loaned to me by Ebrahim Alkazi. Every poem cannot be translated visually but I felt that this one could be. There are several English translations and I chose one where the poet gives us a visual reference to the sky embracing, and almost comforting the poor drowned girl. That immediately gives you a handle on the picture. You start by painting the sky with a comforting hue. And then you deal with how the girl disintegrates bit by bit in the water. The last thing that goes is her hair. As the words say, ‘Then she was carrion with the carrion in the water.’ As I think about this poem right now I am just as moved as I was when I first read it all those years ago.” (Krishen Khanna in conversation with Anuradha Ghosh-Mazumdar, May 2019) The series, created in the early 1970s is called Concerning a Drowned Girl.

In the current work, the girl’s pale form is contrasted with the blue and grey hues of the sea. Her contorted hand and legs are the most defined parts of her figure and encourage the viewer to search the various depths of the painting. Khanna cleverly darkens her body as she submerges, conveying a sense that the girl is slowly becoming part of the sea into which she sinks. This is also felt through the girl’s hair which echoes the flow of the water.

This painting is consistent with many other works by Khanna in terms of its engagement with identity and politics. It can be read as a metaphor for the ills afflicting Indian society more generally, despite the much-vaunted ideals of Nehruvian socialism. When asked if such works were affected by the political zeitgeist of the time, Khanna poignantly stated, “I am not a political spokesman. But I am affected by the state of the world around me and that finds a voice in my work. Things happen in life and they cannot be ignored. I am not going to simply paint pleasing pictures for a drawing room. Life right now is pretty damned powerful. I was in Britain during the Second World War. I lost friends. We went through a pretty horrible period during Partition. It tore the hell out of me. These events remind you of the inglorious traits in human beings, chief among which is the quest for power. Power is all consuming and artists across time have spoken about this. Brecht touched upon this time and again in his poems.” (ibid.)

In spite of its powerful iconography and strong message, this painting is both beautiful and ethereal.