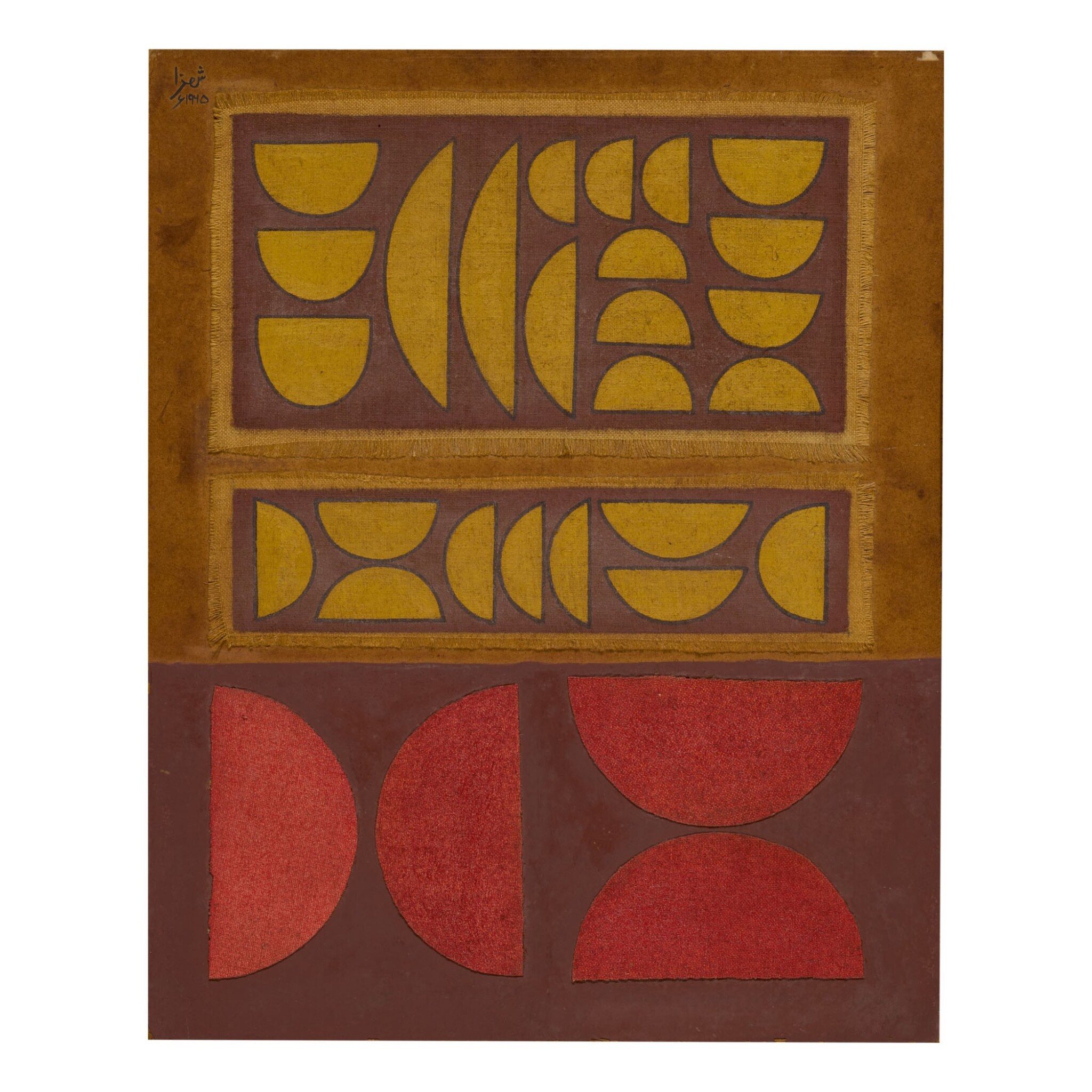 Oil and hand dyed cloth on board

Acquired from the artist's family in 2005

Born in Simla, India in 1928, Anwar Jalal Shemza enrolled at the Mayo School of Art (now National College of Art) in Lahore in 1944, where his training included miniature painting. He ran a graphic studio, edited the Urdu literary journal Ehsas, published several successful short novels in the 1950s and had founded the Lahore Art Circle in 1952, along with Ahmed Parvez and Syed Ali Imam. In 1956, he left for London to study at the Slade School of Art. Following his training there he began a life-long quest to find his own distinctive voice. 'Anwar Shemza chose to strike out in an individual direction entirely of his own invention' (G.M. Butcher quoted in R. Garfield, ‘Navigating the British Landscape’, in I. Dadi ed., Anwar Jalal Shemza, London, Ridinghouse, London, 2015, p. 20)

In the 1960s, Shemza was part of the triumvirate of artists from the subcontinent (along with Francis Newton Souza and Avinash Chandra) who showed together at Victor Musgrave's influential Gallery One in London. Shemza was well respected in London's critical circles, with notable one-man exhibitions at New Vision Centre (1959), Gallery One (1960), Durham's Gulbenkian Museum (1963) and Oxford's Ashmolean Museum (1964). He was initially influenced by western modernists such as Paul Klee and Piet Mondrian, but his later works incorporated traditional Islamic influences, namely architectural shapes and geometry. Over the subsequent twenty-five years, his painting and graphic work covered a broad range of ideas, including explorations of Roman letters, formal arrangements of circles, squares and chessboard figures as well as 'pages' of lines inspired by Arabic and Persian calligraphy. 'If we are forced out of the complacency of what we know, there is a consequent disruption of the very fields of meaning, and the new modes of enquiry become possible: mysticism meets mathematics, and Islamic form is understood to be aiming at something far more far-reaching than being mere ornament than being mere ornament, or pattern as simply ‘pattern’….' (S. Dawood, ‘Let’s Murder the Moonlight’, in I. Dadi ed., Anwar Jalal Shemza, London, Ridinghouse, London, 2015, p. 190)

The current lot, from 1965 (a period of critical acclaim for Shemza), depicts the abstract visual motifs that continually recurred in the artist's career. Here, his textured compositions of the past have given way to a more refined and polished product. Semi-circles in rich tones of umber are set against a tan background in the upper half, and bright red semi-circles pop against a darker velvety brown pigment in the lower half. Simple geometric forms are cleverly woven into complex configurations, as seen in the present example.