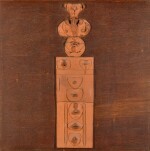 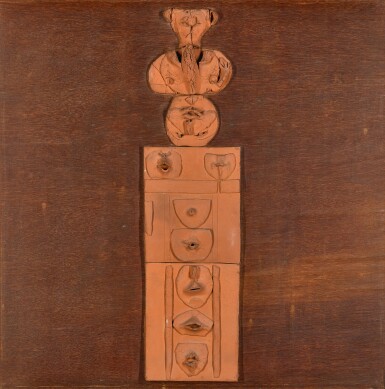 Acquired directly from the artist in India

K. G. Subramanyan was as an incredibly versatile practitioner, renowned as a sculptor, muralist, painter, art historian, writer and teacher. He worked across a diverse range of artistic materials, and created terracotta works later in his career – a large number of reliefs in this medium date to the 1970s. Subramanyan’s use of clay continued into the 21st century and it forms one of his most regarded media.

Throughout his career, Subramanyan deeply valued Indian tradition, and was influenced by local folklore, crafts and customs. This, in part, arose from his time at Kala Bhavan, the Institute of Fine Arts of Visva-Bharati University, in Santiniketan. In turn, Subramanyan was a key figure in reviving traditional art forms through a modernist aesthetic. Terracotta is arguably the medium which best illustrates Subramanyan’s respect for ancient Indian practice and craftsmanship. Discussing his terracotta works in an interview with Timothy Hyman, Subramanyan notes that clay ‘has its own kind of language’, a language that the artist could see was also present in ancient Indian objects, such as the terracottas of Mohenjo-daro. (K. G. Subramanyan in conversation with Timothy Hyman, https://www.youtube.com/watch?v=mXGz02Nd5Fk)