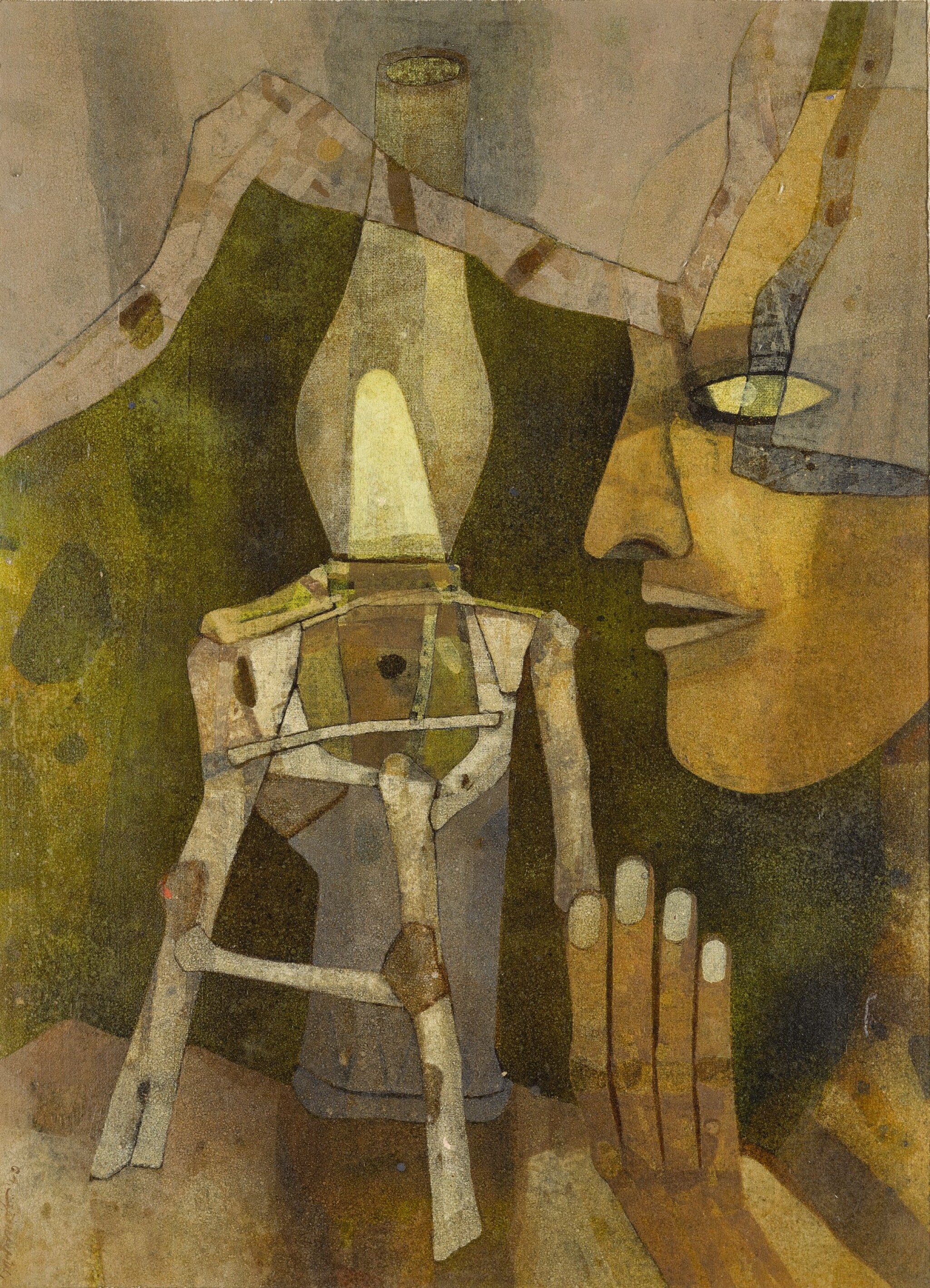 Tempera on canvas board

Acquired directly from the artist at his home in Calcutta, 1983

Ganesh Pyne was born in Calcutta in 1937, where he lived and worked until his death in 2013. His work is renowned for its melancholic mood and unusual cast of ghostly figures, and is tied inextricably to the city in which he spent his life. Culturally, he was influenced by his grandmother’s tales of Bengali folklore; the drawings and watercolours of the Bengal School of Art, in particular those of the group’s founder, Abanindranath Tagore; and the artists, musicians, poets and dramatists with whom he socialised. On a darker note, Pyne’s consciousness was also profoundly influenced by his memories of Calcutta’s communal violence of 1946, which he witnessed as a nine year old. Pyne recalls seeing a cart full of dead bodies, amongst them a high caste elderly woman who was naked, her skin grey, her throat gashed and bloody, her gold necklace still glistening. “I was shaken by the sight. Since then, I have been obsessed with the dark world.” (G. Pyne quoted in G. Sen, Image and Imagination: Five Contemporary Artsits in India, Mapin Publishing, Ahmedabad, 1996, p. 126)

The current lot, painted in 1983 and an example of Pyne’s mature artistic style, bears the influence of his formative experiences in Calcutta. A spectral figure and lamp are rendered in a sombre palette with an exquisite, watery opacity. The lamp, a recurring motif in the artist’s work, allowed Pyne to add an element of theatricality to his paintings and to probe his fascination with chiaroscuro. The present lot is an expert play of light and shade, and the areas of dramatic luminosity have been achieved through Pyne’s signature use of tempera. In a manner recalling that of medieval miniaturists – who glazed their works with natural dye and used egg-whites as a fixative over each layer of colour – Pyne laboriously created his own binding agents and fixatives from indigenous plant varieties to layer upon his works, giving them their incandescent quality.

‘For a painter whose canvases are shadowed with melancholy, a flame or a humble lamp is a simple, but enchanting feature, especially in the compositional context of either a journey or death, with its corollaries of disease, decay and fear.’ (S. Sarkar, Thirst of a Minstrel: The Life and Times of Ganesh Pyne, Rupa Publication Pvt. Ltd., New Delhi, 2005, p. 59)