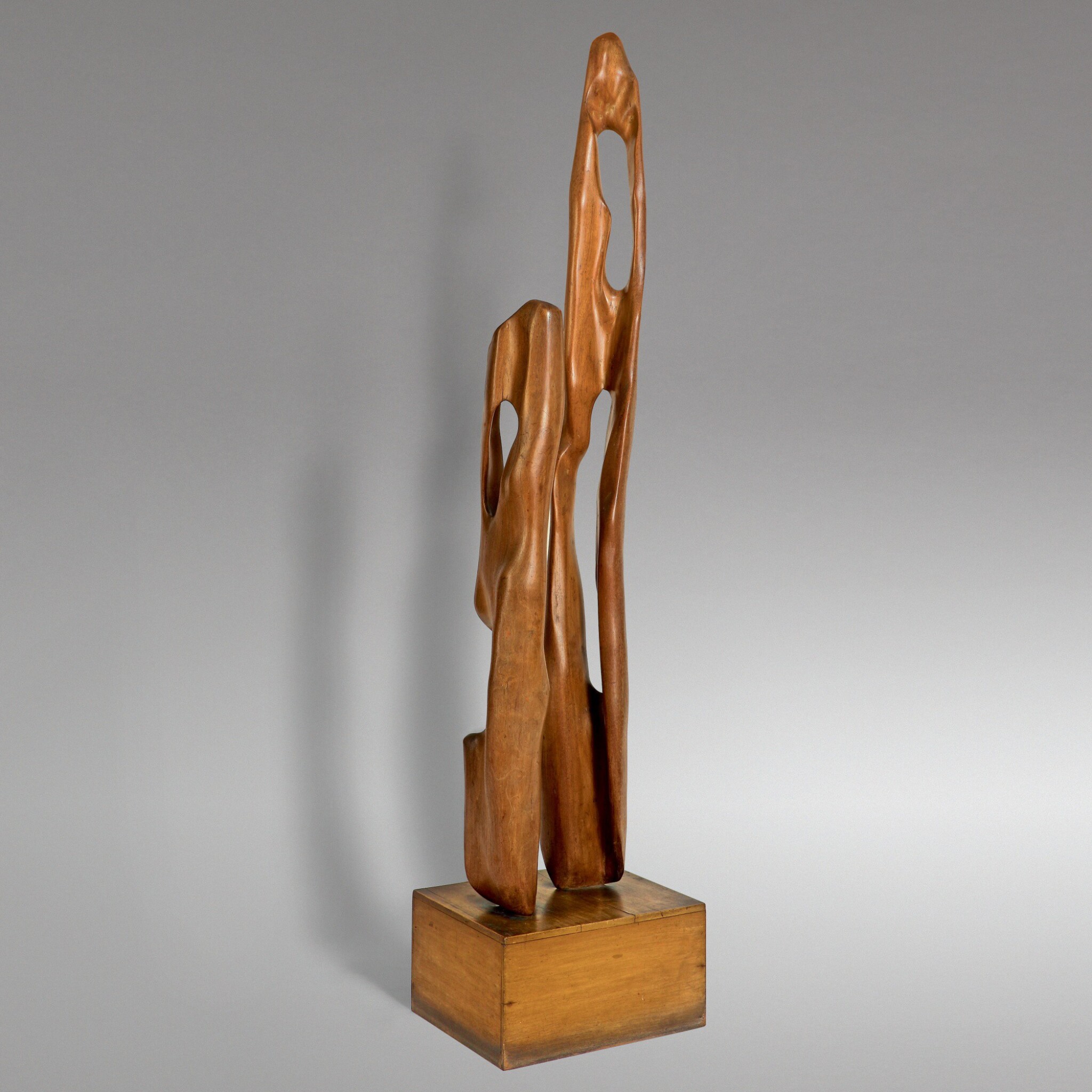 Acquired directly from the artist in India

Pilloo Pochkhanawala, as a woman and a sculptor, was a pioneer in an Indian art world, then dominated by male artists and the painted form. Through her rhythmic sculpted works, Pochkhanawala established herself among her male contemporaries at the forefront of modern sculpture, just as Barbara Hepworth had in Britain two decades earlier. The sculptures of Pochkhanawala rarely appear on the market, and this early, sizeable work in wood is rarer still.

Born in Bombay in 1923, Pochkhanawala initially worked in advertising. It was not until 1951, on a business trip to Europe, that she felt the magnetic pull of the sculpting profession. “… once abroad, I took the opportunity of visiting the major museums. I did take in the vast collections of paintings but every time I looked at the major works of modern sculptors I felt struck by a visual bolt… The paintings did not ruffle my inner composure… [whereas with the sculpture] I was seized by the fear of the challenge of tackling something so difficult.” (Pilloo Pochkhanawala quoted in S. V. Vasudev, Pilloo Pochkhanawala, Lalit Kala Akademi, New Delhi, 1981, unpaginated)

On her travels, Pochkhanawala encountered the undulating forms of British sculptor, Henry Moore. His seated and reclining figures were to have a profound effect on her first forays into this medium. Art critic, S. V. Vasudev, explores this early influence, noting the pertinence of Moore’s self-described artistic purpose to Pochkhanawala’s own sculpting impulses:

For me a work must have vitality on its own. I do not mean a reflection of the vitality of life, of movement, physical action, frisking, dancing figures, and so on, but that a work can have in it a pent-up energy, an intense life of its own, independent of the object it may represent. When a work has this powerful vitality, we do not connect the word Beauty with it. Beauty, in the later Greek or Renaissance sense, is not the aim of my sculpture.

Appropriately, given her great admiration for Moore’s figures, Pochkhanawala’s first works were seated women, sculpted from wood. Aside from Moore, these works do of course bear a personal significance. “To me, the pose of a seated woman, as we encounter it in India, expresses strongly the total acceptance of fatalism.” (Pilloo Pochkhanawala, ibid.) Such an admission is made all the more powerful in that Pockhanawala, through her sculpting career, modernist attitude and attraction to this predominantly masculine medium, defied the stoic resignation of the seated women in her early sculptures.

It would be wrong to discuss Pochkhanawala’s early works without mention of legendary sculptor, N. G. Pansare. As her mentor, Pansare was a guiding force for Pochkhanawala, teaching her the techniques of sculpting and encouraging her to experiment with a variety of materials.

The technical mastery that Pochkhanawala learned through Pansare is plainly visible in the current lot. A pair of amorphous, flowing forms have been sculpted from gleaming teakwood. The wood has been expertly handled so as to elegantly twist and swell, in a manner that seems almost inconceivable in this dense, solid material. The graceful lines and exquisitely smooth surface of the work invite comparison with the wooden sculptures of Adi M. Davierwalla, a fellow Indian sculptor and student of Pansare. It is poignant to compare the two forms in the present lot with the embracing couple in Davierwalla’s Entwined Figures (1949), executed just a few years earlier. The contours of Davierwalla’s figures similarly curve and fold, to create a refined, fluid sculpture. Both Davierwalla and Pochkhanawala deftly imbued their medium of teakwood with a supple plasticity.

Pochkhanwala’s sculpture, in contrast to Davierwalla’s Entwined Figures, is amorphic and of greater size (the current lot stands at over five feet). The organic quality and substantial size of the present work more germanely recall the rousing sculptures of Moore. One particularly striking similarity are the holes Pochkhanawala has hollowed from her rippling wooden forms. These holes, and indeed the smooth perfection of the work in its entirety, appear as if made by a natural and not man-made process. Pertinently, Moore declared his holes to be inspired by the natural world, and his comments in 1937 on the power of holes in his sculpture are remarkably applicable to those seen in the present lot: ‘Pebbles show nature's way of working stone. Some of the pebbles I pick up have holes right through them… The first hole made through a piece of stone is a revelation. The hole connects one side to the other, making it immediately more three-dimensional. A hole can itself have as much shape-meaning as a solid mass.’ (Henry Moore, ‘The Sculptor Speaks’, The Listener, 18 August 1937, pp. 338-40) Whilst Pochkhanawala carves her holes from wood and not stone, these negative spaces are likewise a ‘revelation’ and as much a part of the sculpture as the wood itself.

Alongside her explorations in wood in these early years, Pochkhanawala also worked with beaten lead and cement. The sculptor was to later relinquish these materials, instead turning to what was to become her principal medium, scrap steel and iron. (N. Ty-Tomkins Seth, ‘Introduction’, Pilloo Pochkhanawala - A Retrospective 1952-1984, Gallery Chemould, Bombay, unpaginated) The present work, with its willowy forms, is thus of exceptional importance, being one of very few wooden sculptures created by the masterly maverick - Pilloo Pochkhanawala.