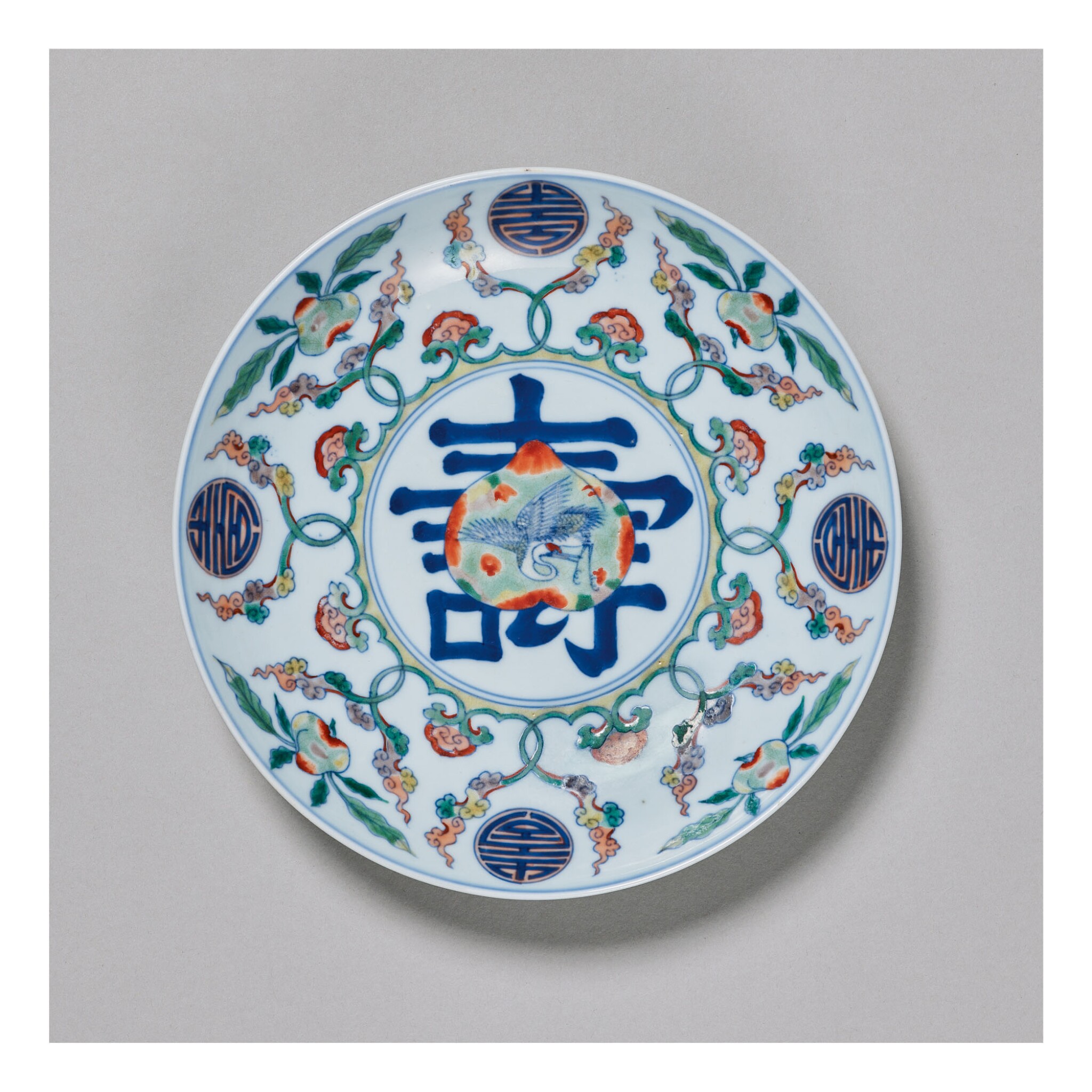 the shallow sides resting on a straight foot, the center with a finely enameled peach enclosing a crane in flight, set against a large underglaze-blue shou character, surrounded by interlocking stylized leafing lingzhi stems radiating through the cavetto, framing alternating shou medallions and fruiting peach sprays at the rim, the exterior with three groups of lingzhi and bamboo amid rockwork, the base with a six-character mark in underglaze blue, inscribed in three columns within a double circle.

An apprx. 1 cm long restored flake chip to the inner footring. Minor wear to the surface and crazing to the enamels, and a stained pin hole to the rim.

Vibrantly painted in the doucai palette, the motifs adorning this dish brim with auspicious meaning indicating it was clearly intended as a birthday gift. During his six-decade-long reign, the Kangxi Emperor had refrained from organizing large birthday celebrations, except on the occasion of his 60th birthday in 1713, and in anticipation of his 70th birthday in 1723. The former was a truly grand national event which lasted weeks and involved numerous processions, performances and banquets, and the latter would have been similarly magnificent had the Emperor not died unexpectedly a few months before. Porcelain wares were produced specifically for these two occasions, and the imperial kilns at Jingdezhen began firing these wares years in advance. Peter Y.K. Lam has recently attempted to identify porcelain produced for these two events and has suggested that dishes of the present type were intended as gifts for the Emperor’s 70th birthday (Peter Y.K. Lam in “Myriad Longevity Without Boundaries. Some Qing Imperial Birthday Ceramics from Hong Kong Collections”, Arts of Asia, October 2010, vol. 40, no. 5, pp 110-111). Lam notes the elongated and slightly rigid style in which the reign mark on these dishes is written and its similarity to Yongzheng period reign marks; thus suggesting that it represents a stylistic transition between the two reigns.