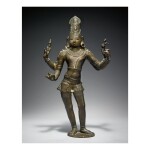 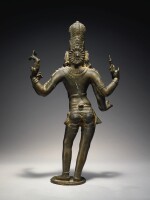 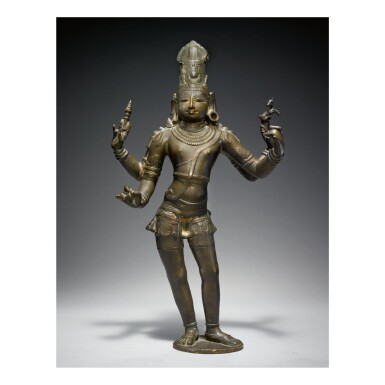 the Lord Shiva standing in tribhanga with his left leg slightly forward, his waist clad with a short veshti and secured with a jeweled girdle, his primary hands gracefully outstretched to hold the vina, his upper arms holding a mrga and parasu, antelope and battle-axe, adorned with a collar of beaded necklaces, his matted hair raised in a tall jatamukuta centered by a small sun and moon disk

Shiva is portrayed here in his manifestation as The Lord of Music entrancing the viewer with the divine music of his vina and swaying in graceful movement as he plays. The tall jatamukuta crowning Shiva’s head tilts slightly as if the Lord was tipping his head back to the rhythm of the music. With arms outstretched, his upper hand slides along the chords while his lower hand plucks at the strings of the vina; his entire body is attuned to the tempo of the music. Shiva, in this manifestation as the originator of song, is both serene and enchanting.

During the Chola dynasty, such images were created widely and actively used as part of sacred worship. Temple complexes were the foci for religious and civic activity and year-round rituals observed with piety and pomp comprised of dance, song, poetry and music. Music itself was considered to lead the devotee into the divine act of worship, darshan, such that by paying homage to the deity, in turn, the deity would bestow blessings onto the worshiper. Sculptures such as these cast in bronze, were intended as artistic expressions of the essence of the Divine, and these icons were created to be portable in procession so that worshipers could partake of the Divine by the act of viewing of the image.

While the art of metal casting long existed in South India with known portable images dating to the Pallava dynasty and prior, it was under Chola rule that the fabrication of such images reached a very high level of technical proficiency resulting in the creation of some of the most supreme sculptures ever made in bronze. Cast in the technique of cire perdue, or lost-wax, the figures would be encased in clay molds before a molten metal mixture of copper alloy would be poured in through apertures. The mold would later be broken to reveal the cooled metal figure, and in doing so, ensuring that no two cast images could be identical. The sculptures were then finished with intricate chasing and detailing producing devotional and artistic masterpieces that remain unparalleled to this day.

As the kulanayaka (dynastic patron deity) of the Chola rulers, images of Shiva in varied iconography abound. Two other examples of the Lord as Vinadhara are in the collection of the National Museum of Asian Art, Washington, D.C. (acc. no. F1997.28) and the Cleveland Museum of Art (acc. no. 1971.117). All similarly show the figure’s chin slightly raised, the lips displaying in a dulcet smile and the hips swaying to the right with the left leg bent. The present sculpture bears more resemblance to the figure in the National Museum of Art, in the slender contours of the body, the full expanse of the arms, the styling of the matted hair and the patterning of the jewelry. Here, Shiva’s body, lithe and agile, seems to drift into a weightless trance from his melodious song.