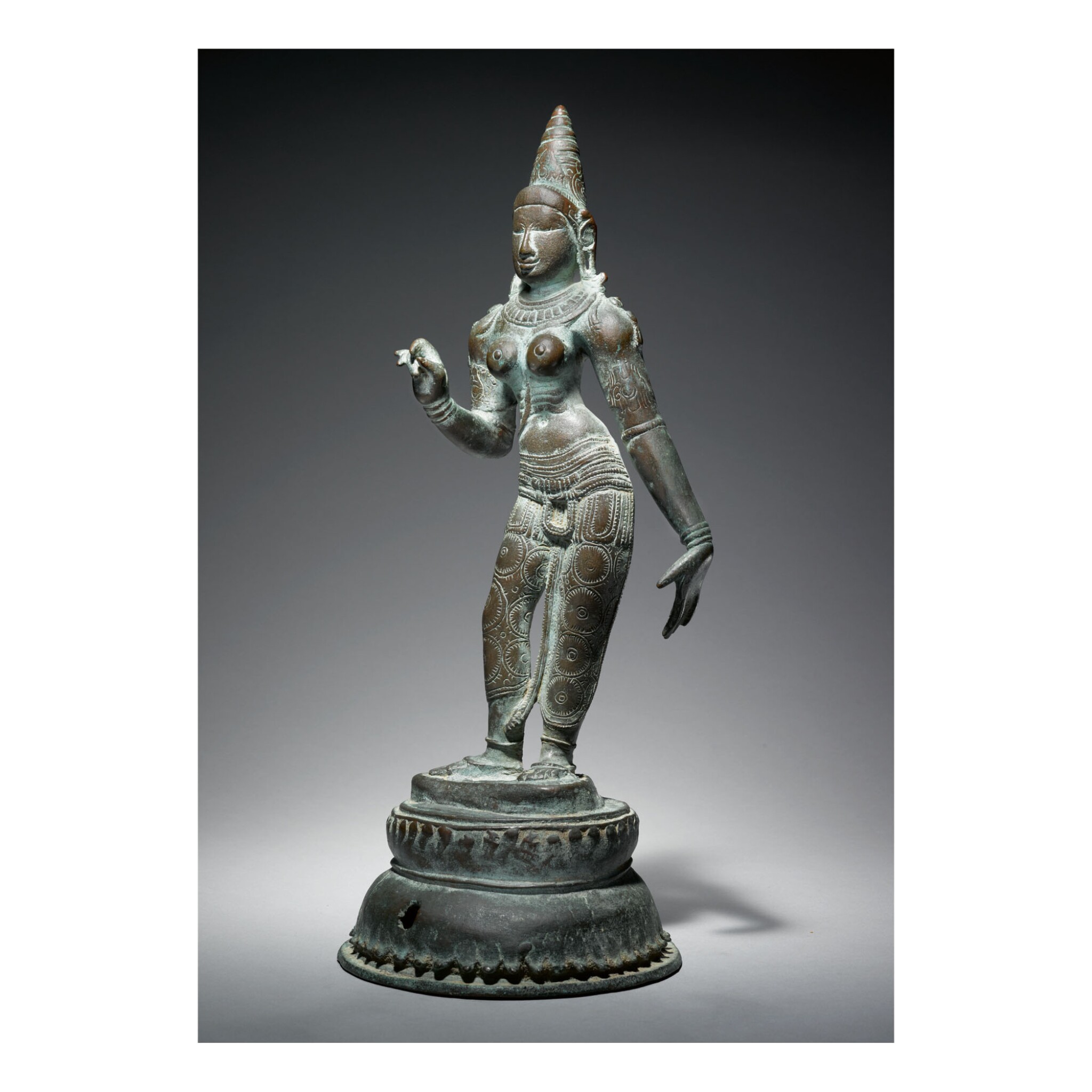 A COPPER ALLOY FIGURE OF UMA

﻿To request a condition report for this lot, please contact Sarah.Ritzmann@sothebys.com.

Indische Kunst, catalogue of the exhibition held by the Württembergischer Kunstverein, Stuttgart, January 20 through March 13, 1966, and Museum für Kunst under Gewerbe, Hamburg, May 18 through July 31, 1966, no. 107 and 108

Parvati, or Uma as she is referred to in Southern India, is the epitome of beauty. As the tamer of Shiva’s power, she represents the archetypal image of the female as a symbol of fertility and grace. Originally part of a set, this sculpture was paired with the Shiva Nataraj, The Lord of Dance, now in the collection of the Metropolitan Museum of Art, New York (acc. no. 1987.80.1).

Uma with her elegant sensuality would have stood in conjunction with the perpetual movement of Shiva. While she stands in restful equipoise, Shiva balances on one leg in continuous motion. Uma, however, does not stand in contrast through stillness. Instead her left suspended arm with the wrist flicked delicately outward and the right hand swayed upwards as she drops her weight into the left protruding hip, reflects the interlude of space between movement. The gentle fluidity of Uma, distinct from the feverous motion of Shiva, lingers with a pacifying effect.

The 11th Century date of this piece marks it as a relatively early bronze during the Chola Empire, and therefore reflects elements of the earlier Sembiyan casting style. Like the bronze goddess known as Tripuravijayi, or Victress of the Three Worlds, there is soft modelling to the breasts, an elasticity to the flesh, a gentleness to the sway and a slenderness to the form, as illustrated in Art of the Imperial Cholas by Dehejia, New York, 1990, pp. 4-8. Another early example, the Goddess Holding a Lotus (Circa 950), illustrates the modeled quality of the Sembiyan style and shows a similar treatment in the circular motifs of the dhoti (Cleveland Museum of Art, acc. no. 1984.2) This also features as a decorative element around the halo of the Metropolitan Shiva (V. Dehejia, The Sensuous and the Sacred: Chola Bronzes from South India, New York, Seattle and London, 2003, p. 123, cat. 12).

Chola bronzes were actively used as implements of devotion. These bronzes would have been adorned with abundant decoration, danced through processions, and venerated by the hands of thousands of devotees. They represent the larger context of a flourishing empire which thrived in its artistic production, wealth and building programs, commencing with the workshop of the Chola Queen Sembiyan Mahadevi. She bestowed gifts of bronze sculpture to temples, beginning a legacy in the Chola Empire of producing some of the most superlative examples of this kind.

The piece has also passed through the hands of many well-known collections of Indian and Southeast Asian Art. The late Dr. J. R. Belmont, an early European collector of Indian sculpture, first acquired this bronze in the 1950s. Part of his collection then passed into the hands of Christian Humann and was folded into the Pan Asian Collection between 1960-1970. In 1982 part of the Pan Asian Collection, including this bronze, was acquired by Robert H. Ellsworth, another legendary connoisseur who incorporated the works into his expansive collection of Chinese, Indian, Himalayan and Southeast Asian Art.