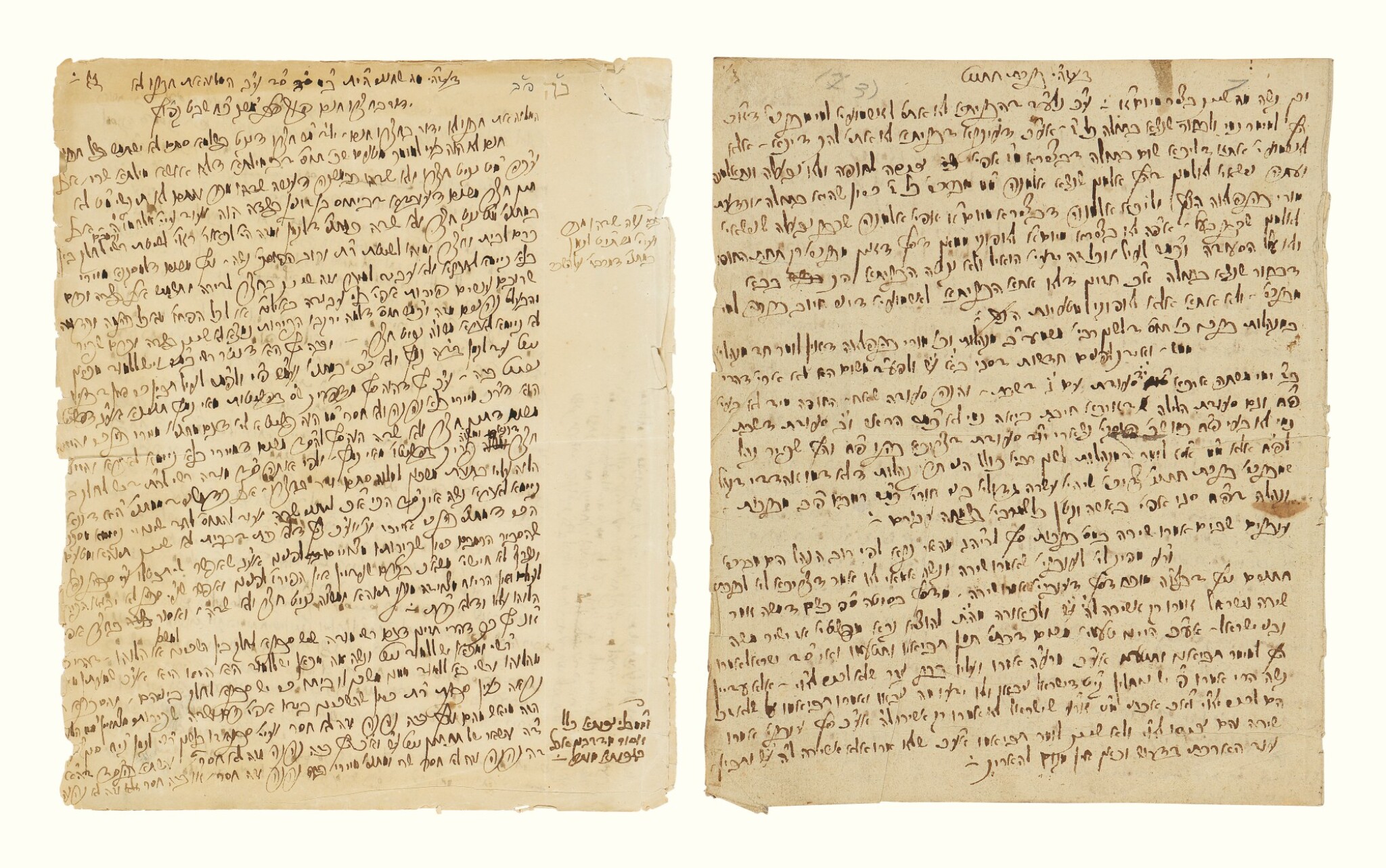 Rabbi Moses Sofer of Mattersdorf and Pressburg (1762-1839) was one of the most prominent Orthodox rabbis of European Jewry in the late eighteenth and early nineteenth centuries. His writings include novellae and sermons, as well as a compendium of responsa entitled Hatam sofer (Seal of the Scribe), which is also the appellation by which he is best known. His works have enjoyed enduring popularity and are still frequently consulted by Orthodox Jews to the present day. His pupils, numbering in the hundreds, would go on to become some of the leading Orthodox rabbis of European Jewry.

The present lot includes two autograph treatises by the Hatam Sofer of his novellae to various Talmudic passages. The first text, dated 28 Shevat [5]586 (February 5, 1826), comprises the Hatam Sofer’s unpublished novellae to Bava metsi‘a 64b, discussing the prohibition against a creditor accepting favors from his debtor, an act which is considered a violation (on a rabbinic level) of the biblical injunction against lending at interest. These comments differ significantly from those printed in collections of his novellae to Bava metsi‘a from 1889 and 1929. It is highly unusual nowadays to encounter manuscripts of the Hatam Sofer that have not already been published.

The second, undated tract, titled birkat hatanim, contains some of the Hatam Sofer’s published comments (1903; with small differences) to Ketubbot 7b treating the laws of the seven-day period of celebration that usually follows a Jewish wedding. Of special note here are his citations (f. [1r]) of passages composed by one of his revered teachers, Rabbi Phinehas ha-Levi Horowitz (1730-1805), author of the Sefer hafla’ah.

As seen in these texts, the Hatam Sofer had a habit of adding a dot written above a dash at the close of many paragraphs. In his introduction to Sefer he-hatam sofer: derashot (1929), Rabbi Joseph Naphtali Stern (1888-1971), editor and publisher of many of the Hatam Sofer’s works, cites Rabbi Asher Anshel Weiss (1882-1944) as quoting the opinion of a kabbalistic scholar that this was likely based upon the cryptic words of the famed Ba‘al Shem Tov recorded by his grandson, Rabbi Moses Hayyim Ephraim of Sudilkov (1748-1800), in Sefer degel mahaneh efrayim, Parashat va-yehi (1810), that “the secret of the entire Torah is contained within the mystery of Manasseh and Ephraim: Manasseh is the mystery of the dash and Ephraim is in the mystery of the dot.”

The Hatam Sofer’s selfless leadership and profound scholarship, in addition to his moral character, humanity, and humility, have conferred an almost mystical reverence upon the surviving relics of his oeuvre penned in his own hand. Stern cites the words of Chief Rabbi of Moravia Mordecai Benet (1753-1829) that merely gazing at the handwriting of the Hatam Sofer is a segullah (charm) to help the onlooker attain fear of Heaven. The Hatam Sofer’s descendants and followers, in particular, deem original handwritten material by the sainted rabbi to be imbued with a level of holiness that serves as a source of both metaphysical protection and blessing. The fact that the comments to Bava metsi‘a have yet to appear in print only adds prestige to this already remarkable set of texts.

1. The two treatises were written by Rabbi Moses Sofer in his own hand, both of them seemingly at some point in the early nineteenth century in Pressburg.

2. His grandson, Rabbi Simeon Sofer (1850-1944; son of the Ketav Sofer, Rabbi Abraham Samuel Benjamin Wolf Sofer), who founded a yeshiva in Erlau (Hungarian: Eger) in 1881 and served as rabbi of the city, apparently inherited the manuscripts from his father (or perhaps directly from his grandfather).

3. Moses (Moritz) Klafter (ca. 1855-1941), who was born and educated in Hungary but moved to New York before World War I and served there for a time as rabbi of Beth Hamedrash Hagadol Anshe Ungarn, writes that he received these texts as a gift from his friend, Rabbi Simeon Sofer, presumably before he emigrated (Treatise 1: f. [2v]).

4. Klafter’s library was purchased ca. 1940 by a private collector, and the manuscripts passed by descent to the present owner.