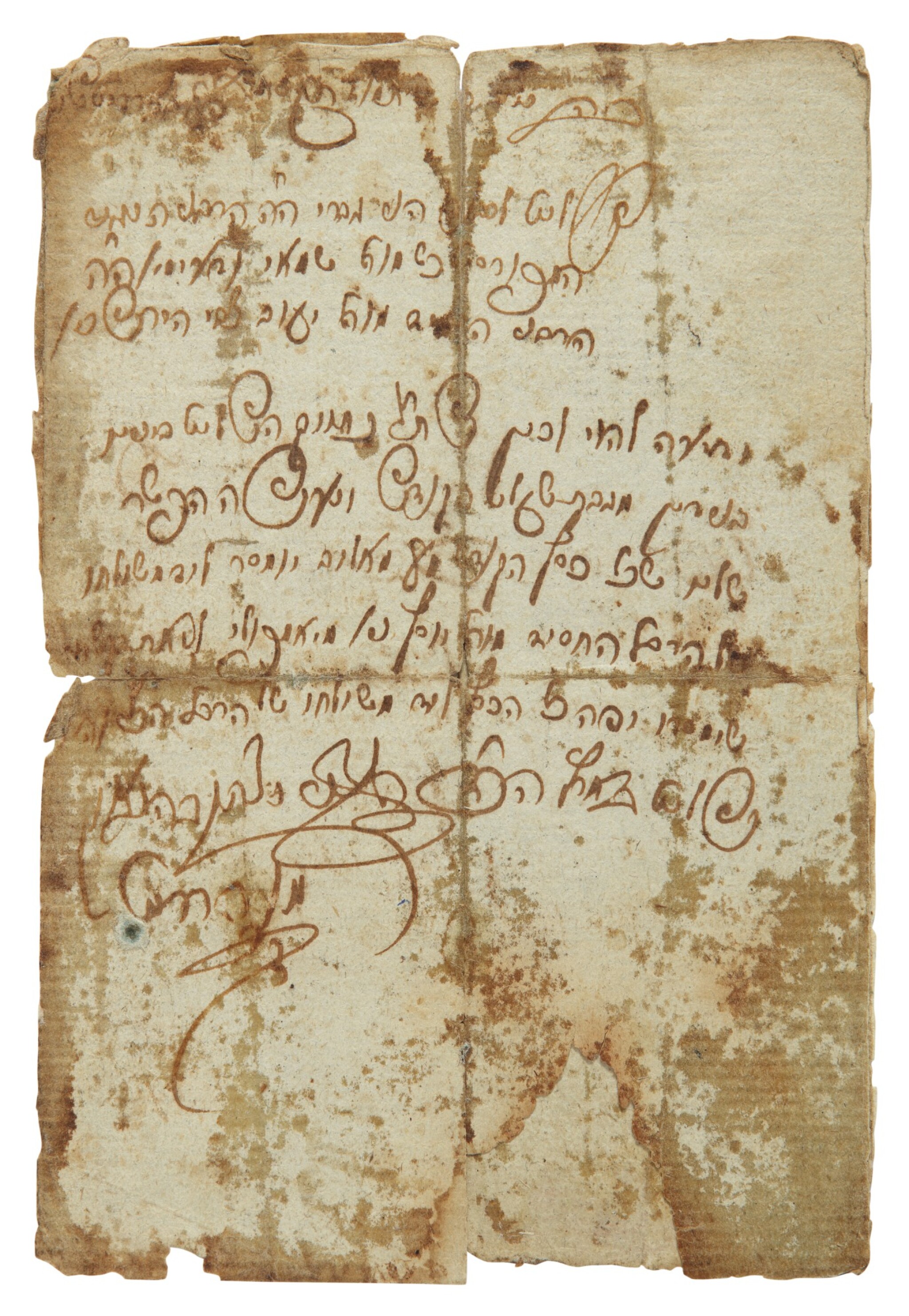 One of only a handful of extant documents written in the hand of the Berditchever Rebbe.

Rabbi Levi Isaac of Berdychiv (ca. 1740-1809), one of the luminaries of Hasidic tradition and Jewish folklore, was born into a rabbinic family in Ochakov and educated in Jarosław, where he earned himself the moniker “the prodigy of Jarosław.” After his marriage, he was introduced by Rabbi Samuel Shmelke Horowitz to Rabbi Dov Ber, the Maggid of Mezhirichi, under whose influence he became a devotee of Hasidism. Levi Isaac served as rabbi of several communities, including those of Ryczywół, Żelechów, and Pinsk, before finally, in 1785, taking up the rabbinate of Berdychiv, where he was able to spread Hasidic teaching freely, without the interference of the Mitnaggedim (opponents of Hasidism). Although he apparently did not establish a Hasidic court, he earned great renown on account of his disciples, his highly-acclaimed Sefer kedushat levi (Slavuta, 1798; Zhovkva, 1806; Berdychiv, 1811), and his reputation as saneigoran shel yisra’el, one who always sought in his prayers before God to find points of merit in the Jewish people’s favor.

In 1777, Rabbi Menahem Mendel of Vitebsk and Rabbi Abraham ha-Kohen of Kałyški led a group of about three hundred Hasidim in immigrating to the Land of Israel. Shortly after their arrival, they established a philanthropic fund, kuppat ma‘ot erets ha-kodesh, meant to encourage donations from the Diaspora in support of the new settlers. In 1796, the fund was split in two, with monies coming from White Russia and Ukraine (kolel raysn) administered separately from those collected in Volhynia (kolel volin). That year, the Maggid of Kozienice, the Seer of Lublin, and Rabbi Abraham Joshua Heschel of Opatów approved the appointment of Rabbi Mordechai Shapiro of Nesukhoyezhe as the gabbai ha-kolel (treasurer) in charge of overseeing the operations of kolel volin. It seems he continued serving in this capacity until his death in 1800 and that his friend Rabbi Joseph of Yampil (d. 1812), son of Rabbi Jehiel Mikhl of Zolochiv (R. Mordechai’s teacher), succeeded him thereafter.

The present lot is a letter, dated Tammuz [5]561 (June/July 1801), sent by R. Levi Isaac to two individuals, Shammai and Jacob Zevi Hirsch, about the collection of Holy Land charity in Mogilev. In it, the Berditchever notes that all the shiklei ha-kodesh (sacred coins) donated by that community should be transferred to the agent of R. Joseph of Yampil, “for he is the ruler of the land” (see Gen. 42:6, where the biblical Joseph is referred to in the same terms). Aside from the historical value of this letter as a record of the philanthropic activity of premodern Eastern European Jewish society, it is also one of only a handful of known surviving documents written and signed by R. Levi Isaac of Berdychiv. As such, it constitutes a material link to the life and legacy of this legendary leader and lover of his people.