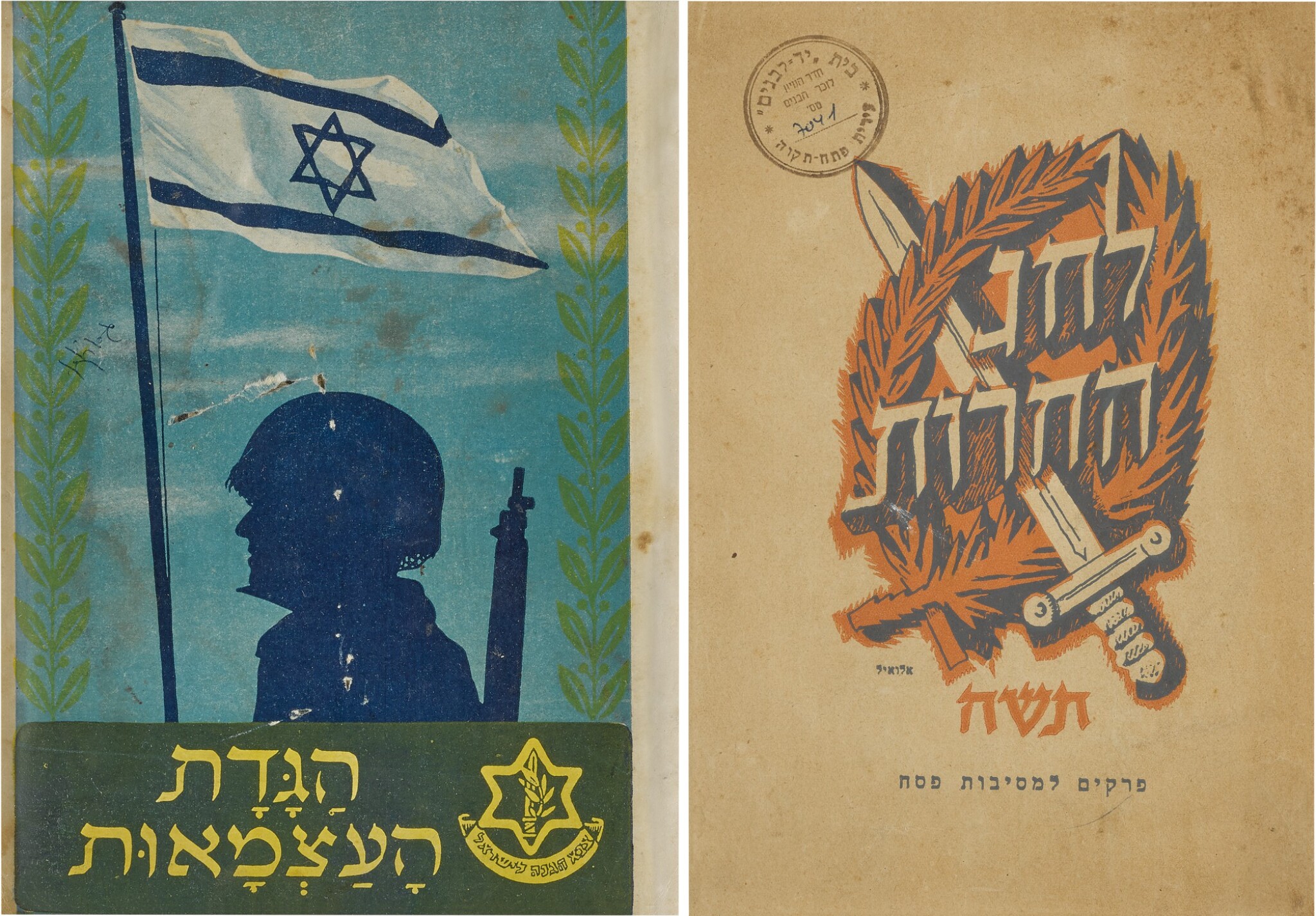 Two rare Zionistic Haggadot, one for Yom Haatzmaut, the other for Passover.

In the early days of the State of Israel, efforts were made to place the ceremonies of its Independence Day (celebrated on or near 5 Iyyar) within a traditional Jewish framework. For this purpose, the Minister of Education and Culture, Ben-Zion Dinur, commissioned the budding author and playwright Aharon Megged (1920-2016) to produce a special text that could be recited as part of the day’s celebration. The result was Haggadat ha-atsma‘ut, a pamphlet that combined the structure and some of the iconic language of the Passover Haggadah with the Zionist spirit of Yom Haatzmaut. Many of the work’s photographs and illustrations depict scenes of soldiers and civilians defending and building the young state, while the text traces the history of Zionist immigration and organization, resistance to the British, and declaration of independence. Examples of passages include: “Behold, I am ready and prepared to recount the events of the War of Liberation…” and “Not via an angel, not via a seraph, and not via a messenger did we smite the enemy and overcome him, but via the Israel Defense Forces…”

The Haggadah was printed in ten thousand copies and its text was published in the 1952 Yom Haatzmaut edition of the newspaper Maariv (5 Iyyar coincided that year with April 30). While it was originally intended for use in the IDF, the paper’s editor expressed the belief that perhaps “in the future it will become the holiday Haggadah of the entire Jewish people.” Instead, however, the Haggadah aroused fierce opposition among religious circles that objected to its secularization of the beloved Passover liturgy and its removal of God from the story of the state’s founding. In response to the criticism, Prime Minister David Ben-Gurion himself ordered the removal from circulation of those copies that had already been distributed. A short column tucked away in the bottom-left corner of the front page of the May 7th edition of Maariv explained that “out of consideration that the form of the pamphlet and some of its contents are likely to offend some soldiers in the Israel Defense Forces, the authorities in the General Staff did not approve the publication of the pamphlet and prohibited its dissemination among the military units.”

The second booklet that comprises this lot, Le-hag ha-herut [5]708, was published in advance of Passover 1948. The text included here is largely that of the traditional Passover Haggadah, though with readings from modern Hebrew authors like David Frischmann and Hayyim Nahman Bialik interspersed. By contrast, the work’s illustrations, executed by artist Arieh Allweil, were meant to evoke the pioneering Zionist ethos of the period leading up to the War of Independence. These military-themed scenes, as well as the Haggadah’s instructions to make four toasts (arba kosot) to the Hebrew state, the Haganah (pre-state paramilitary organization), immigration to the Land of Israel, and the reader’s military unit, suggest that the pamphlet’s primary audience comprised members of the Haganah. Indeed, a dedication in the present copy, dated Passover 5708, mentions the Seder held by battalion 32 of the Alexandroni Brigade, which would go on to participate in a difficult battle for control of Latrun in late May 1948.