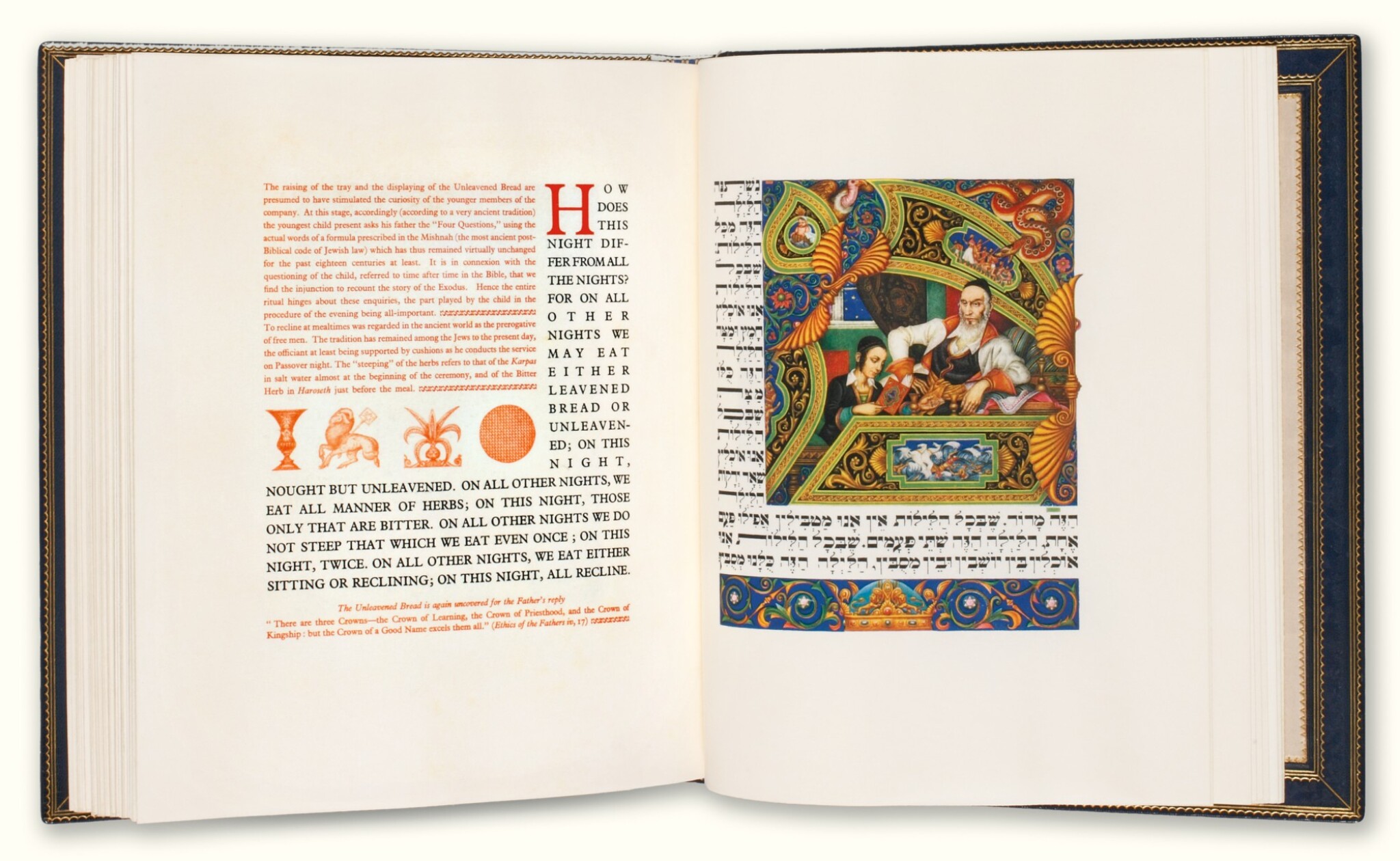 118 pages (11 x 9 1/4 in.; 280 x 235 mm) printed on double-vellum sheets (two connected vellum leaves with the flesh sides facing inward) with Hebrew and English calligraphic text in variously colored inks. Fourteen full-page and numerous smaller color halftone reproductions of Szyk’s original watercolor gouaches, including embellished initials, vignettes, and border decorations. Cockling; minor discoloration along edges of first and final folios. Original, elaborately-gilt blue crushed morocco within a fitted plastic wrapper; covers tooled with image of an enthroned, crowned figure raising a Haggadah in his right hand and a beaker in his left; spine in seven compartments with raised bands, gilt title and author/editor names in two of them, the rest with gilt crown motifs; turn-ins gilt; mounted cream silk doublures printed with a monochromatic illustration of Moses supporting the Ten Commandments; bound by Sangorski & Sutcliffe, London, England. Housed in an original three-quarter blue morocco folding case, sunned and worn at edges, corners, and on lower board and spine; crowned lion’s head gilt on upper board; spine in seven compartments with raised bands, as with spine of book; lined with red velvet.

Limited edition—number 114 of 125 vellum copies signed by Szyk and Roth for sale in the British Empire—with additional personal dedication by Szyk to Gertrude and Julius Kaufman.

This Haggadah represents the culmination of a thousand-year-old tradition of illuminated Hebrew manuscripts. Upon its publication, The Szyk Haggadah was described by the Times Literary Supplement of London as “a book worthy to be placed among the most beautiful of books that the hand of man has produced.” Each individually illuminated text is an example of both extraordinary artistic accomplishment and of profound scholarship. There could be no more fitting subject than the Haggadah for this milestone collaboration between Arthur Szyk (1894-1951), the Polish refugee and internationally acclaimed illuminator, and Cecil Roth (1899-1970), the preeminent British doyen of Jewish history, who edited the text and appended a historical introduction.

Given the unfolding events in Nazi Europe, the Haggadah became, for Szyk, a personal and political statement. Dedicating his Exodus narrative to King George VI (1895-1952), Szyk acknowledged the key role that England, his temporary place of residence, had to play in Jewish survival: “At the Feet of Your Most Gracious Majesty i [sic] humbly lay these works of my hands, shewing forth the Afflictions of my People Israel. arthur szyk [sic], illuminator of Poland.” Of his accomplishments, Szyk wrote in French on the page opposite the title: “I am but a Jew praying in art, and if I have worked, if I have succeeded to some degree, if I have been favorably accepted among the elite of society, I owe it all to the teachings, traditions, and eternal virtues of my people.”