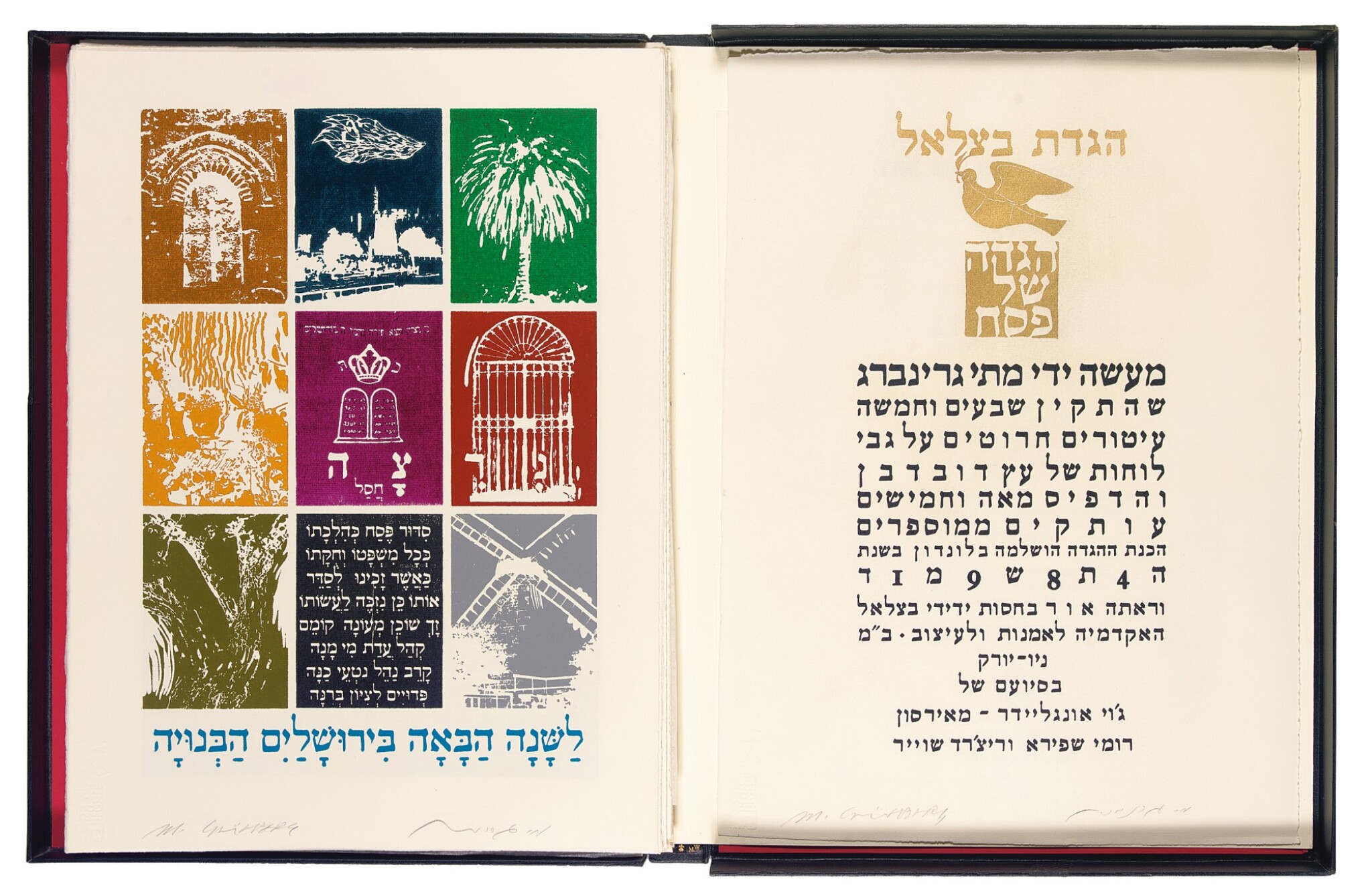 The Bezalel Haggadah: 74 folios (20 1/2 x 15 in.; 520 x 380 mm) on paper, each folio separated by tissue guards. F. [43] slightly creased in outer edge; short tear in outer edge of Hallel folio; some of the tissue guards creased at times; evidence of intermittent experimentation by artist. All folios housed in a binder placed within a black leather folding case by WBMW; gilt title and year on upper board, repeated on spine.

Jerusalem 1967-1990: Three parts in one (15 x 10 3/8 in.; 382 x 263 mm): (1) 11 folios on paper, connected to one another like an accordion and housed within a paper folder; (2) 8 groups of 7 folios each, on paper, each group’s folios connected to one another like an accordion, with slight soiling to the front cover of the paper folder at base; (3) 8 loose folios on paper housed within a paper folder. All three parts housed within a black leather folding case by Book Works, London, very slightly worn; gilt title and author and artist names on upper board. Accompanied by exhibition promotional pamphlet.

The Book of Ruth: 18 bifolia (20 x 35 1/4 in.; 505 x 895 mm), plus one introductory leaf, on paper. All folios housed in a paper folder, the front cover slightly soiled, and placed within a cloth folding case; gilt title on upper board and gilt title and publisher name on spine, slightly worn. Accompanied by promotional pamphlet.

Three limited edition works, each signed by the artist in Hebrew and/or Latin characters and numbered A/P (artist proof).

Maty Grünberg was born in Yugoslavia in 1943. In 1948, he and his family immigrated to Israel, where Grünberg studied at the Bezalel Academy of Arts and Design in Jerusalem; he would later go on to receive a Master’s from the Central School of Art and Design in London. Grünberg’s work has been widely exhibited, and he is the recipient of numerous awards. He has published over eighteen portfolios, and his highly acclaimed work can be found in both public and private collections throughout the world.

Grünberg is best known for his artist books, usually created in collaboration with renowned authors. These works were produced using a variety of techniques, including etching, silk screens, and woodcuts. All were published in limited editions.

The Bezalel Haggadah, one of the finest modern illustrated Haggadot, is filled with bold graphics and vibrantly colored illustrations, the imagery meant to evoke the physical landscape of Jerusalem. Several illustrations are modeled on early illuminated Haggadot as well as Egyptian artifacts. The calligraphy is based on a design by Elihu Koren, one of Israel’s foremost typographers. Each print was pulled by the artist on handmade paper using a nineteenth-century press. The Haggadah was commissioned by the Friends of Bezalel Academy of Arts and Design, Inc., and the project took five years to complete.

Jerusalem 1967-1990 was created in collaboration with the Israeli poet Yehuda Amichai (1924-2000). It includes Amichai’s seminal poem “Jerusalem 1967” in the original Hebrew, accompanied by an English translation by Stephen Michell. The black and white cityscape woodcuts that comprise the other two parts of the work, “Jerusalem 1990” and “Jerusalem As a Theme,” were inspired by Grünberg’s residence in Jerusalem during the winter of 1989. In the introductory words of Susan Tumarkin Goodman, Chief Curator at the Jewish Museum, New York, “Flora and fauna, architectural details, panoramas of the city fuse to become an inseparable part of the experience of Jerusalem.”

The Book of Ruth was likewise a joint project, this time with the poet Linda Zisquit, who composed a free translation of the book of Ruth, accompanied by an introduction and an anthology of biblical intertexts. Like the translation, Grünberg’s eighteen color woodcut illustrations constitute an original, lively, mellifluous interpretation of the ancient story, whose echoes, as the artist notes in his introduction, can be heard down to the present day.