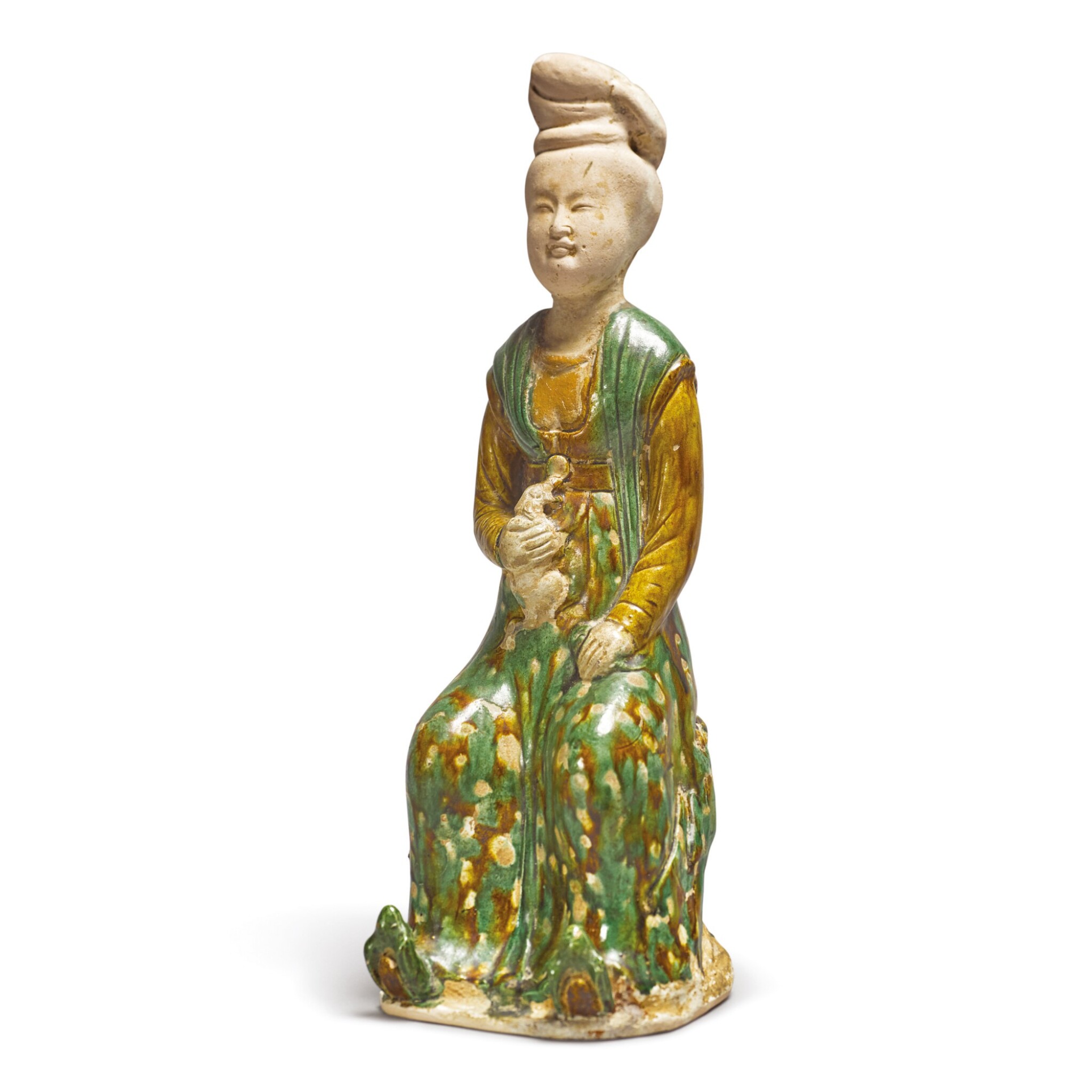 A RARE SANCAI-GLAZED POTTERY FIGURE OF A SEATED COURT LADY

well modeled, the courtier seated and holding a pet weasel to her abdomen, the other hand clutching the sash end of a capelet, her elegant coiffure and face left unglazed, the body outfitted in sumptuous garments glazed in green and ocher, with the voluminous skirts decorated in green and brown with buff pottery spots left in reserve to create a dappled pattern, her seat glazed to match, a pair of pointed slippers peaking out from under the garment hem and glazed green

The neck area restored, possibly to restore a break with an incipient crack to the upper back. A restored chip to the edge of the back shawl. Chest repainted. Weasel tail and her left shoe restored. Losses, shallow flakes, abrasions and repaint to the glazes throughout.

The present figure offers a glimpse into the cultural and political developments of the illustrious Tang dynasty. In particular, this figure illustrates the power, privilege and autonomy of court women. These figures were commissioned for royal and aristocratic tombs of elite families. Objects made to accompany the departed, known as mingqi, were prominently displayed before being placed in special niches within the tombs, following lavish funerals.

The glory of the Tang dynasty is characterized by its cosmopolitan openness to foreign trade and a rich flourishing of the arts. A mutual exchange of religion, ideas and culture occurred concurrently with the abundant trade along the Silk Road. Within this bustling environment, elite women had access to high levels of learning and the liberty to exercise political influence. The present sculpture reflects this newfound confidence and aesthetic exchange. The figure is dressed in the fashionable Persian style of its time, in a high-waisted gown with tight sleeves, loose, flowing skirt and décolleté. The curled shoes that show beneath the hem also indicate the mobility of Tang women, a marked contrast to the practice of foot-binding from the Song dynasty until the fall of the Qing Empire.

Amongst the celebrated sancai-decorated pottery figures, figures of women constitute a rare and notable group. The present figure is exceedingly rare for the small animal present in the composition. Other examples of this type typically hold flowers or birds. Compare the present figure with a figure in similar garments, seated on a rattan stool, and holding a foliate sprig in the raised hand while clutching the sash end in the other, from the Bai Ma Xuan Collection and sold in these rooms, 21st September 2005, lot 18. A figure from the Hardy Collection, also seated in a dappled gown, holding a small bird in the raised hand, was sold at Christie's New York, 21st September 1995, lot 77, and is now preserved in the Freer and Sackler Galleries of Art, Washington D.C.