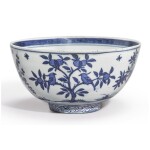 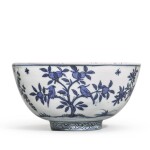 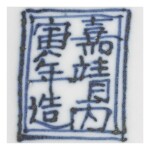 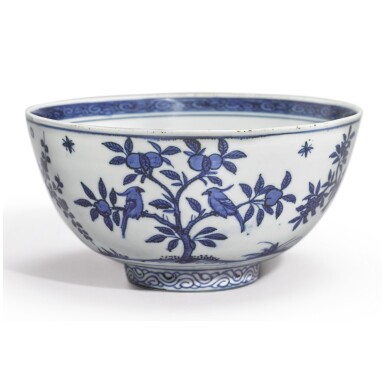 the deep rounded sides painted with pairs of long-tailed birds perched atop the branches of fruiting peach and prunus trees, with grass growing below and butterflies in flight above, all within single line borders with a scroll border encircling the foot, the base inscribed with a six-character mark within a double square, reading Jiajing bingyin nianzao, corresponding to 1566

There is a minute flake chip and fritting around the rim. The surface overall with shallow scratches. There are minor firing imperfections including burst glaze bubbles and painting flaws. The foot rim possibly slightly polished.

Delicately painted in soft washes of cobalt with a scene of long-tailed birds on flowering and fruiting branches, the motif on this bowl follows in the painterly style developed in the Chenghua reign (r. 1465-1487). A Chenghua mark and period cup painted with a similar scene, in the Palace Museum, Beijing, is illustrated in Imperial Porcelains from the Reign of Chenghua in the Ming Dynasty I, Beijing, 2016, pl. 88, together with a reconstructed example recovered at the imperial kiln factory in Jingdezhen, pl. 89.

Bowls painted with this design and with cyclical dates are unusual, and no other closely related example appears to have been published. See two unmarked bowls painted with this motif in a related style, but also with a band of flying horses below the rim, sold in these rooms, the first, 9th November 1983, lot 300, and the second 11th May 1978, lot 176, possibly the same bowl previously sold in our London rooms, 12th February 1974, lot 111; and a Jiajing mark and period bowl sold in our London rooms, 11th December 1984, lot 329. See also a dish, dated by inscription to 1561, painted with birds on a flowering tree, from the collection of Stanley Herzman, now in the Metropolitan Museum of Art, New York, acc. no. 1991.253.48; and its pair, included in the exhibition Seventeenth Century Blue and White and Copper-Red and Their Predecessors, S. Marchant & Son, London, 1997, cat. no. 2.