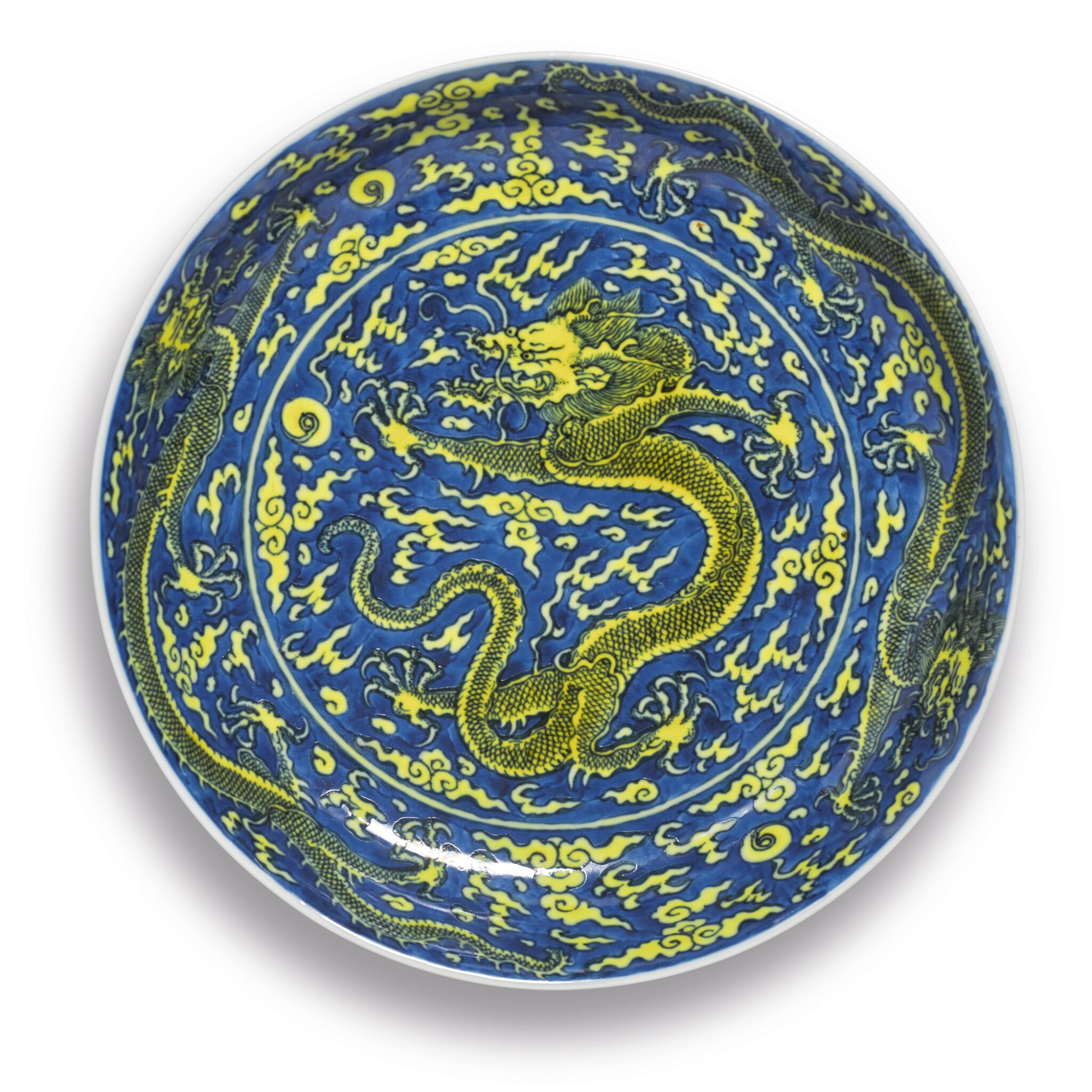 the low rounded sides rising from a tapered foot, well enameled in bright tones of yellow against a rich cobalt-blue ground, centered by a ferocious five-clawed dragon writhing amid flames and cloud swirls in pursuit of a 'Flaming Pearl', decorated around the well with two further dragons chasing 'Flaming Pearls', the exterior similarly decorated with a pair of dragons above a lotus lappet border, the base glazed white and inscribed with a six-character mark in underglaze blue within a double circle, Japanese box (3)

Dynamic in both design and coloration, the present dish reflects the imperial power of the Qing dynasty. Blue symbolizes immortality and evokes the sky and water, while yellow corresponds with Earth traditionally believed to be at the center of the known universe, a position of such importance that the color was associated with the emperor. The strength of the emperor is also portrayed in the ferocious five-clawed dragons that are vibrantly colored in yellow enamel.

A closely related example in the Palace Museum, Beijing, is included in Gugong Bowuyuan cang Qingdai yuyao ciqi [Porcelains from the Qing dynasty imperial kilns in the Palace Museum collection], Beijing, 2005, pl. 36; a pair of dishes is published in the Illustrated Catalogue of Tokyo National Museum. Chinese Ceramics, vol. II, Tokyo, 1990, pl. 579; and another is illustrated in Mayuyama. Seventy Years, vol. I, Tokyo, 1976, pl. 1047. See also a dish sold in these rooms, 11th April 2008, lot 2917; another sold in our London rooms, 6th December 1994, lot 222; and a third dish, from the Sir Joseph E. Hotung Family Trust, sold at Christie's New York, 22nd March 2007, lot 330, and again in these rooms, 14th March 2014, lot 1, from the Jie Rui Tang collection.

Dishes of this type are rooted in imperial porcelains of the Ming dynasty. By referencing the past, the Kangxi Emperor simultaneously linked himself to his predecessors while asserting the authority of his rule by means of a distinct style of dragon: in profile, powerful and refined. For a Ming prototype, see a Jiajing mark and period example, but with a frontal central dragon, in the British Museum, London, illustrated in Jessica Harrison-Hall, Ming Ceramics in the British Museum, London, 2001, pl. 9:86, together with a Wanli period version, pl. 11:142.