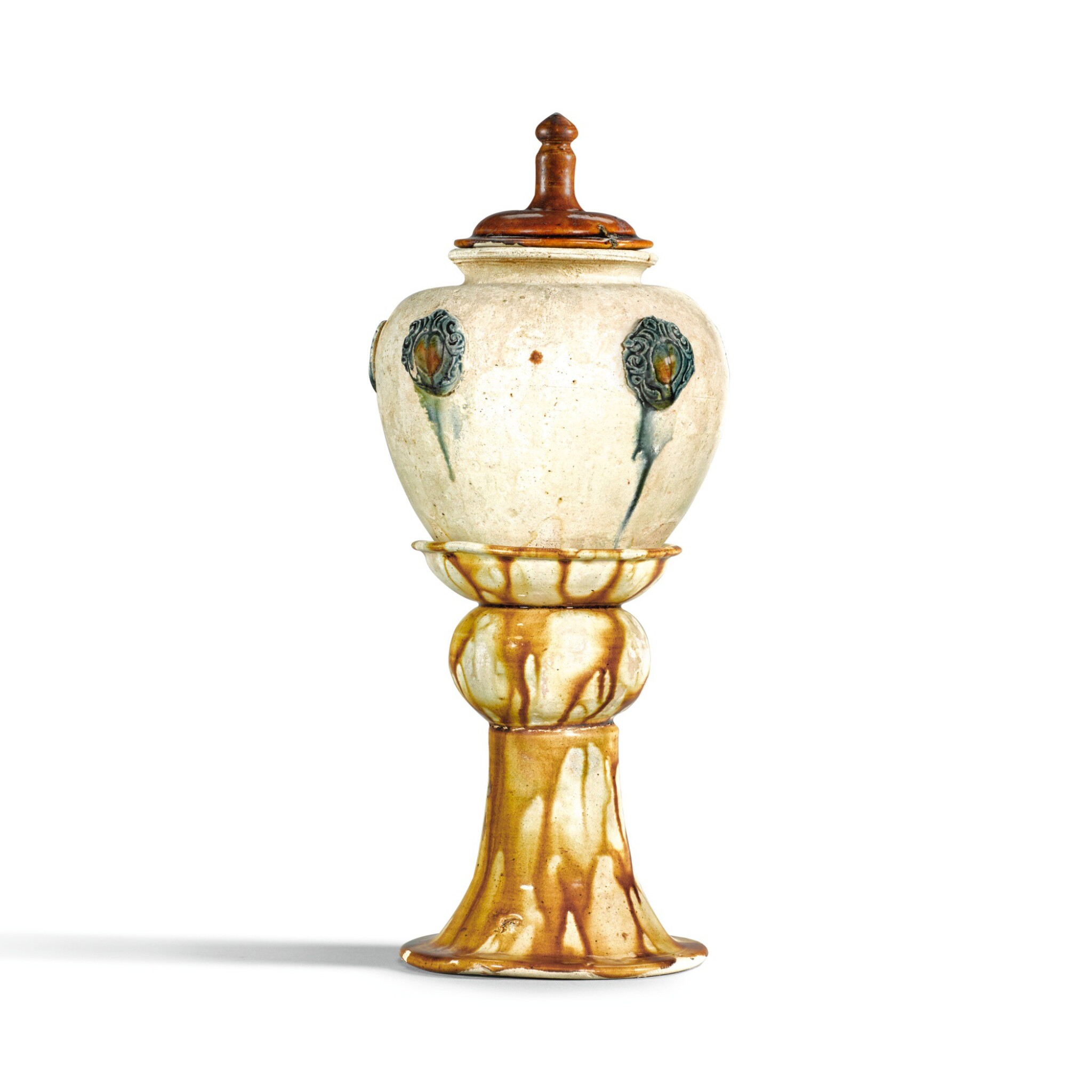 A RARE BLUE AND AMBER-GLAZED RELIQUARY and cover

the ovoid jar applied with four small shaped panels highlighted in blue and amber glazes, the domed cover with a cylindrical finial, all supported on a tall base bulging at the centre, covered in varying tones of amber glaze

There is a 6mm., wide shallow chip to the edge of the foot, a 5x2mm., glaze flake to one of the applied medallions, and minor nicks to the edges of two medallions.

Ceramic containers of this form, which evoke the form of Buddhist pagodas, are among the very few Buddhist objects that have been recovered from Tang tombs. While generally, they are covered entirely in sancai glazes or unglazed and painted, the present example is special for the sprig-moulded and glazed appliques, which recall contemporary metal ware encrusted with jewels and pearls. This technique was first used on ceramics in the Northern Qi dynasty (550-577) and became very popular on early Tang dynasty pottery.

From the early years of the Tang dynasty, Buddhism was supported by the imperial court, who actively sponsored building projects and encouraged monks to travel abroad and bring back sacred scriptures. Despite the flourishing of the religion, Buddhist objects have only rarely been found among tomb furnishings of this period.

Several related reliquaries have been excavated in the vicinity of Gongyi city, Henan province and were probably made by the Gongyi kilns, see Zhongguo gu ciyao daxi. Zhongguo Gongyi yao/Series of China’s Ancient Porcelain Kiln Sites. Gongyi Kiln of China, Beijing, 2011, p. 163, a biscuit-painted example of similar form, but without appliqués; p. 269, fig. 5 and p. 414 top, a very similar white-glazed jar and cover with applied masks but lacking a stand; pp. 247 and 414 second from top, another white-glazed jar with applied masks, but lacking the pagoda-shaped top and the stand; and p. 166 and p. 270, fig. 6, a sancai-glazed example without appliqués.

A related sancai-glazed reliquary was recovered from a Tang tomb at Zhongbao, near Xi’an, Shaanxi province, and now preserved in the Shaanxi Museum of Chinese History, Xi’an, is illustrated in Shaanxi sheng bowuguan [Shaanxi provincial museum], Beijing, 1990, pl. 78; a much taller one was sold in our New York rooms, 23rd March 2004, lot 611; and another in our Paris rooms, 14th June 2007, lot 116. See also a painted example discovered at a monk’s tomb in Wuwei, Gansu province, and now in the Gansu Provincial Museum, Lanzhou, included in the exhibition Monks and Merchants. Silk Road Treasures from Northwest China, Asia Society and Museum, New York, 2001, cat. no. 75, together with one unearthed at a Tang tomb in Sanmenxia, Yanxi county, Henan province, fig. A.