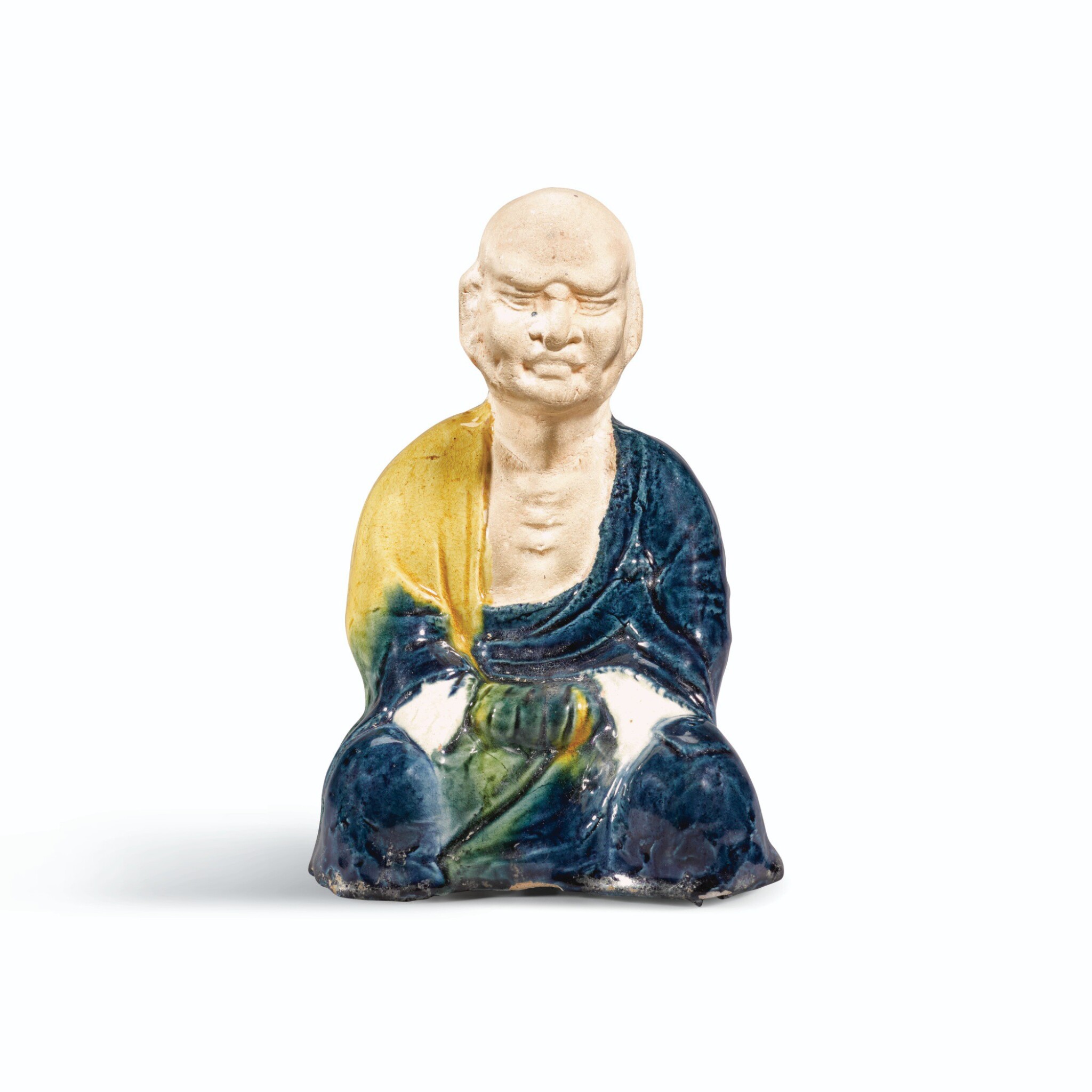 A RARE BLUE AND AMBER-GLAZED SEATED FIGURE OF A LUOHAN

seated in dhyanasana with his legs folded and his hands in meditation position, wearing a loosely fitting diaphanous robe opening at the chest, the robe highlighted in a rich deep blue glaze with amber colour streaks, the unglazed face with a serene expression, moulded with long eyebrows, a pronounced cranium, and a pair of pendulous ears

There is a shallow 2x1cm., flake to the front edge of the base and three areas of chipping to the glaze (probably contemporary to when made) on the base where it has pooled during firing.

more information on and additional images for this lot, please contact Alice.Garner @sothebys.com.

The dating of this lot is consistent with the result of a thermoluminescence test, Research Laboratory For Archaeology And The History of Art, Oxford University, no. 466w44.

Despite the spread of Buddhism, its teachings and images in the Tang dynasty, ceramic figures of luohan (arhats) are extremely rare, and this piece appears to be unique. Stylistically, it follows the vivid realism High Tang sculptures, when Buddhist deities were rendered with highly expressive and distinctive features. Sculptures of luohan, such as the present, were modelled with stern meditative expressions and with highly individual features, to convey the concept that spiritual enlightenment was within the reach of all practitioners.

Luohan are close disciples of the Historical Buddha Shakyamuni. While they attained enlightenment during the course of their lives, they delayed entering Nirvana and remained on earth to protect the Buddhist dharma and aid practitioners in seeking enlightenment. Luohan are believed to possess perfect wisdom and insight of all existence while being freed from the bonds of desire. By the Tang dynasty, the teachings of luohan were made available thanks to the translation of the Fahua jin (Annotated Record of Buddhism) by the pilgrim Xuanzang (596-664).

While no other closely related figure of a Luohan appears to have been published, after the Tang life-size sancai Buddhist figures were produced by kilns in Beijing, see Beijing Longquanwu yao fajue baogao/Excavations of the Longquanwu Kiln-site in Beijing, Beijing, 2002, col. pls 6 and 7, and Luohan figures, perhaps from these kilns, were recovered at Buddhist caves in Yixian, Hebei province. A seated Luohan from this group is in the British Museum, London, accession no. 1913,1221.1; and another is in the Metropolitan Museum of Art, New York, accession no. 21.76.