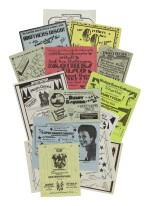 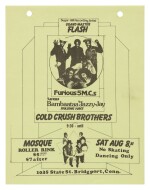 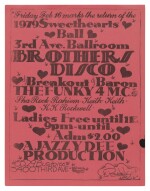 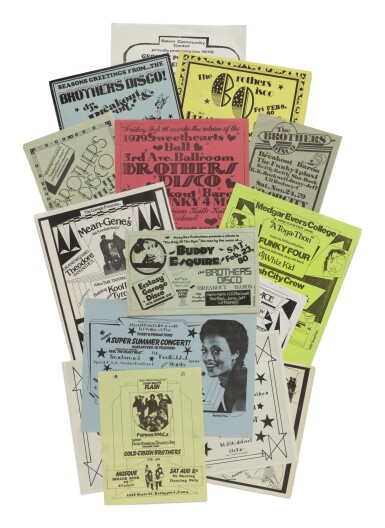 Original paper handbills, ranging in size from 8 1/2 x 5 1/2 in. to 8 1/2 x 11 in., on green, yellow, beige, pink, white and blue paper. A couple creased where previously folded, a few small faint spots of soiling and or toning, but overall in excellent condition.

THE KING OF HIP HOP FLYERS

Buddy Esquire, was a prolific handbill artist in the South Bronx during the early days of Hip Hop. Over a 5-year period, he designed over 300 flyers, which were given out in the neighborhood to advertise parties. His style, which he referred to as "neo-deco" was very distinctive and instantly recognizable, borrowing heavily from Art Deco movie poster designs. Hip Hop flyers such as these are some of the best primary sources for documenting the nascent Hip Hop movement. Packed with information, they record early fashion, the party scene, and give us the ability to trace the early evolution the careers of numerous artists; because they were only intended for short time use, very few have survived intact.