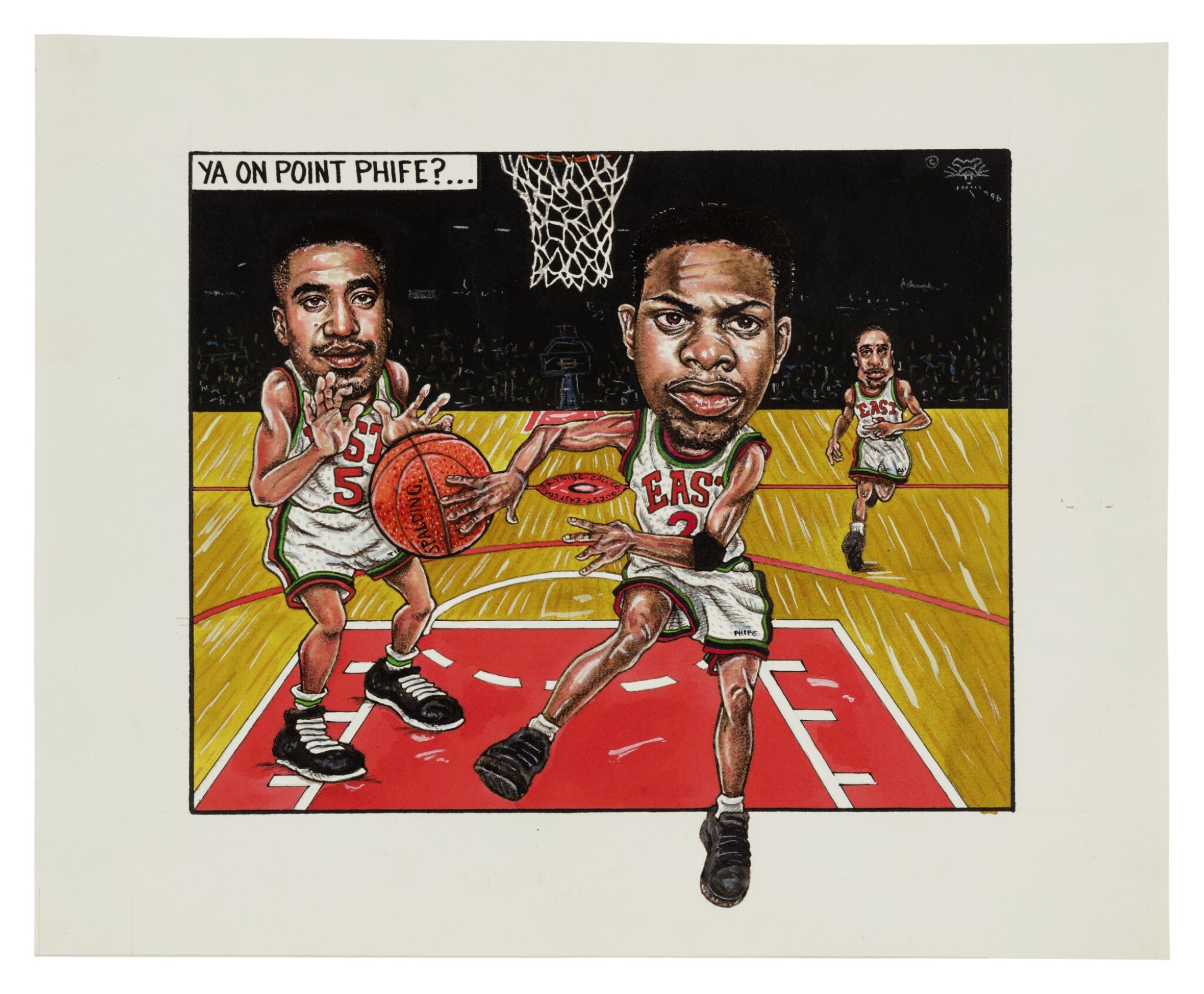 "YA ON POINT PHIFE?" ORIGINAL ARTWORK, AND PREFATORY SKETCH FOR THE 70TH "THE LAST WORD" CARICATURE. PUBLISHED IN: SOURCE MAGAZINE, ISSUE 84, SEPTEMBER 1996.

THE ORIGINAL ARTWORK FOR DAVIS' BRILLIANT CARICATURE OF A TRIBE CALLED QUEST, ENTITLED “Ya On Point Phife?...” PUBLISHED IN SOURCE MAGAZINE AS PART OF DAVIS' LEGENDARY "THE LAST WORD" CARICATURES.

"HIP HOP'S OFFICIAL CARTOONIST" (-Ernie Pannicioli) André LeRoy Davis rose to fame as the creator of the brilliant “The Last Word” caricatures which appeared on the last page of Source Magazine from 1990 – 2006, which “…poked fun, in the best Mad Magazine/National Lampoon tradition, at whomever the cover artist happened to be.” (Former Source writer Michael Gonzales). To be featured on the cover of Source and in “The Last Word” meant that you’d arrived as a rap star.

The artist recounts how depiction of Phife Dawg and Q-Tip of the legendary Hip Hop group A Tribe Called Quest playing basketball, came to be:

"A TRIBE CALLED QUEST musically could not be fucked with. Whenever they dropped an album there was collective anticipation, they couldn’t fail. Here it was that Death Row’s Suge Knight in all his red suited glory was going to be the month’s cover story, but I was asked to make A.T.C.Q the stars of the show. It would be my second attempt at capturing the essence of who they were. My first attempt in 1996 was not as successful as I expected and although I loved the idea that I came up with of having them literally being in the underground, I was not as happy with my capturing of their likenesses. Now in 1996 with their fourth album, “Beats, Rhymes and Life” set to drop, the first single release, “1nce Again” seemed to be on repeat as it was frequently booming out of radio speakers and I remember the video staying on heavy rotation on Video Music Box. The song harked back to the classic Tribe joint from 1991, “Check The Rhime”. I knew right away that with a strong concept and a strong illustration that I could pay supreme homage to the Queens natives. The Tribe branded, “Ya On Point Phife? Once Again Tip!” was their signature and I was determined to sign this illustration with some permanent FLY inks and paints. The idea of basketball and a smooth behind the back wrap around pass ala “Pistol Pete” Maravich or Earvin “Magic” Johnson cemented the imagery that popped into my brain. I wanted Phife to slickly pass the rock to a waiting and ready Q-Tip to solidify the fact that Phife was indeed on point! I knew what I wanted to draw, but I needed to look through a stack of Sports Illustrated magazines in order to find the perfect photo reference that connected and lovingly married the visual that I had in my mind. A quick sketch laid down for positioning purposes and the addition of Ali Shaheed Muhammad in the background let me know that I was ready to proceed forward with the final. I can see a few things that I would have changed up, but I was pleased with the final illustration.” (Andre LeRoy Davis)

Phife Dawg (Malik I Taylor) contacted Davis several years after the publication of this piece, in 2013, asking for a copy of the present caricature, and inquiring whether Davis ever designed album covers. In the course of the conversation, Phife confirmed that “Ya On Point Phife?” was his favorite of the three caricatures that Davis had done of A.T.C.Q. Phife would tragically pass away just a few years later, in March of 2016.

After earning his BFA from The School of Visual Arts College in New York City, Davis has been working as a freelance artist, supplying caricatures, illustrations and humorous illustrations for an array of magazines, entertainment venues and record companies, including Bad Boy Entertainment, Def-Jam, Mad Magazine, Mtv Networks, Marvel Comics and The TOPPS Company, Inc. He wrote and illustrated “The Last Word” for Source Magazine from September 1990 through January 2007, and has written stories, conducted interviews and structured music reviews for the likes of The Source, Vibe, Rappages, XXL, Smooth Magazines and HipHopDX since 1994.

See related lot 106 for the published version of this artwork.

Please note that this lot is further accompanied by a pencil sketch, seen included in the image for lot 108.