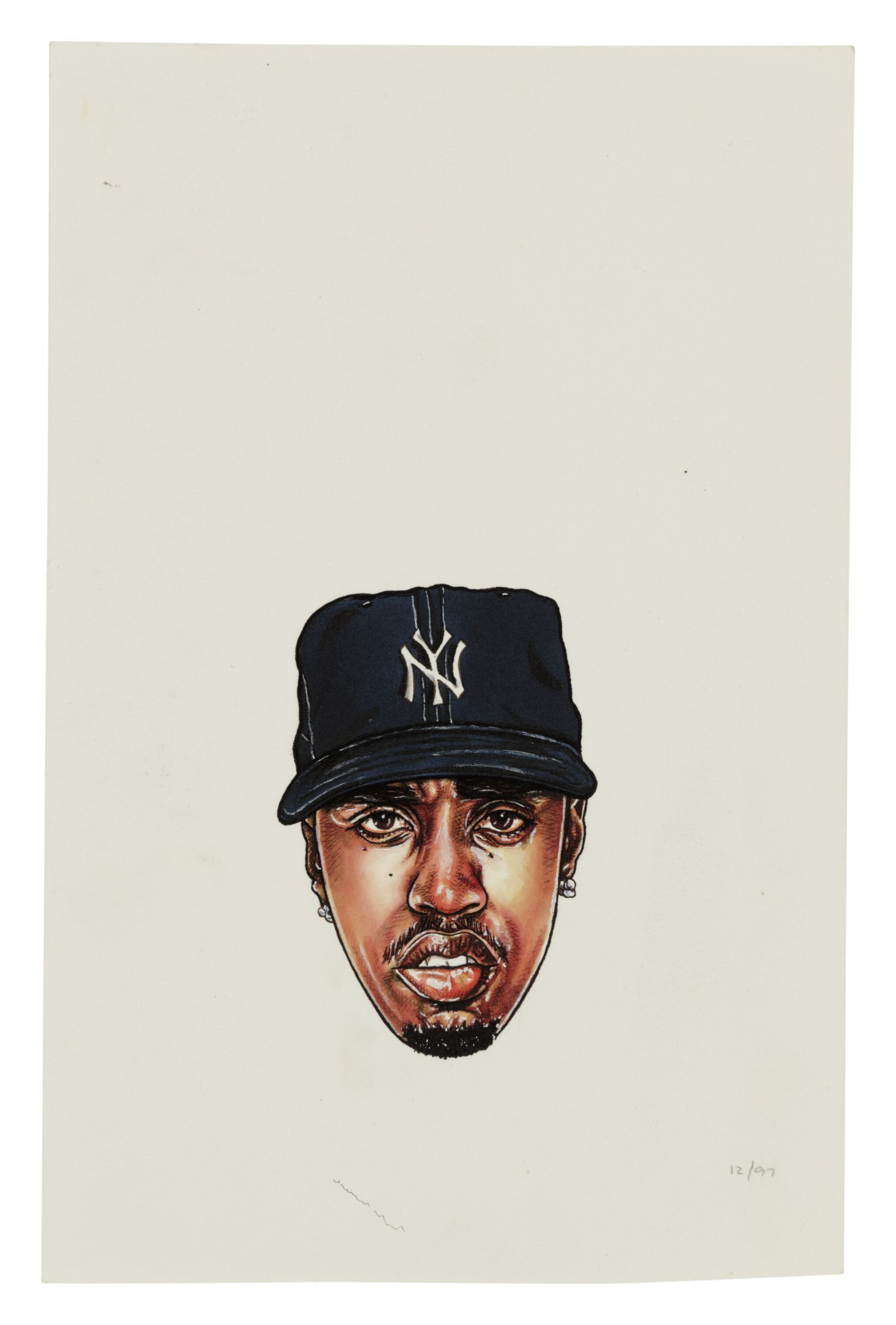 "HIP HOP'S OFFICIAL CARTOONIST" (-Ernie Pannicioli) André LeRoy Davis rose to fame as the creator of the brilliant “The Last Word” caricatures which appeared on the last page of Source Magazine from 1990 – 2006, which “…poked fun, in the best Mad Magazine/National Lampoon tradition, at whomever the cover artist happened to be.” (Former Source writer Michael Gonzales). To be featured on the cover of Source and in “The Last Word” meant that you’d arrived as a rap star.

"Faces of ’97 was the next episode in the world of The Last Word. With the year end approaching it was time for the Source year-end wrap up. The questions: Who stood out during the year? Who was most memorable? Who dropped a classic album? Who was the Face of 1997? Having created more than a few years end pieces previously, I really wanted to create something totally different, unexpected and completely out the box. Realistically I really wanted to push the envelope and test myself by pushing my creativity and my overall creative experience. The very first idea that popped into my head was solid, but I had no idea how I was going to pull it off. I was intrigued by what I was about to get myself into. If you’re a Mad Magazine fan, then you might remember the inner back page of every issue. As a kid, although I liked to keep all my comics and magazines in pristine condition, there was the, “Mad Fold-In” Mad Fold-in was a full-page illustration where at the top of the page the letters “A” and “B” can be clearly seen and there are instructions that read, “Fold section B over to the left so that “A” meets “B”. Hhmmm… Once you did that a new and different illustration was instantly bought to life as the old illustration morphed into something totally different. In my mind I wanted to create something like that. I wanted to take the most memorable faces that were chosen from ’97: Biggie, Master P, Rakim and Foxy Brown and somehow have them transform and morph into the face of Puff Daddy. My quick sketch was all about facial positioning and the direction that I thought I was going to proceed with. I fumbled with how some words could possibly transform within the piece. I still had absolutely no plan of attack or strategy set up, but deep in my soul I knew that I was going figure something out to make this idea happen. I went by my gut and my normal tame cockiness about my artistic skills. I dove in creatively with no plan except to kill the illustrations and capture the likenesses for all the parties involved. I pulled out all my quality photo reference and I proceeded to pencil Biggie, Master P, Rakim and Foxy like I’ve never drawn any of them before. Currently I paint directly on top of my tight pencils, but back then I would grab my crow quill pen, point #103 and my bottle of fadeproof Higgins brown ink and I would ink directly on top of the tight pencils before smoothly painting over them with a variety of Dr. Ph. Martin’s Dyes. Creatively I was right where I wanted and needed to be with enough time to figure out the morphing aspect of the piece, when out of the blue I got notification that my deadline was moved ahead and I had to get the finished piece in earlier than I expected. Source deadline wise… this NEVER happened!

I never miss a deadline, so my brain shifted and I moved to creative plan B. I still hadn’t figured out my definitive Mad-Fold in successful conclusion so I had to morph my damn self and get creative on the fly. I was gonna have to perform a “Face Lift” shelve the tight pencils that I had just created and then draw and paint a real tight illustration of Puffy. Now you probably thought to yourself, what is a “Face Lift’? Well with the arrival of Photoshop I could scan one of my previously drawn and painted finished illustrations when absolutely necessary and take someone’s face off their body… clean it up in Photoshop then, Bamn! Face lift! Old pieces that I had created of Biggie, Master P and Rakim were scanned and then cleaned up as I sat with the art director at the Source offices I laid out how I wanted the finish piece to look, complete with the “face lifts” and the new and now completed Puff Daddy piece. At that time period I had not yet brought Foxy Brown to life with my pencils and paint, so sadly creative wise with the changed deadline, there was no time to make it happen. I had to proceed onward without Foxy being in the mix where she absolutely belonged for ‘97."

After earning his BFA from The School of Visual Arts College in New York City, Davis has been working as a freelance artist, supplying caricatures, illustrations and humorous illustrations for an array of magazines, entertainment venues and record companies, including Bad Boy Entertainment, Def-Jam, Mad Magazine, Mtv Networks, Marvel Comics and The TOPPS Company, Inc. He wrote and illustrated “The Last Word” for Source Magazine from September 1990 through January 2007, and has written stories, conducted interviews and structured music reviews for the likes of The Source, Vibe, Rappages, XXL, Smooth Magazines and HipHopDX since 1994.

See related lot 106 for the published version of this artwork.

Please note that the pencil sketch titled “Ya Point Phyfe” is not sold with this lot.