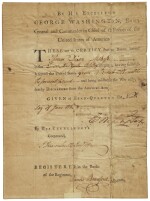 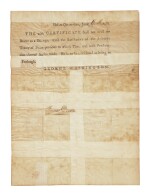 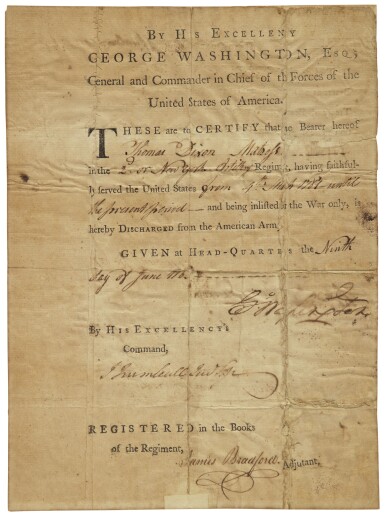 With ceasefire orders issued in April 1783, Washington began the gradual disbandment of the Continental Army, then situated a short distance from his Newburgh headquarters at the New Windsor cantonment. The plan called for enlisted men and noncommissioned officers to be discharged first, and the present certificate was issued to Thomas Dixon, Matross in the Second Artillery Regiment since 4 March 1781. Dixon's discharge, like those of his compatriots, was provisional, as text on the verso of the document clarifies that "The within Certificate shall not avail the Bearer as a Discharge, until the Ratification of the definitive Treaty of Peace; previous to which Time, and until Proclamation thereof shall be made, He is to be considered as being on Furlough." The Treaty of Paris was signed on September 3, 1783, by commissioners of the United States, Great Britain, France, and Spain.