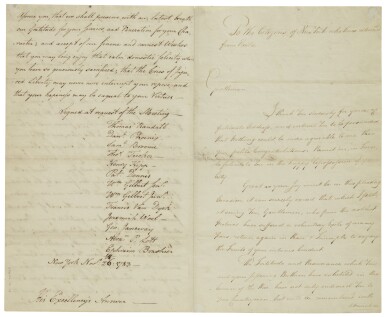 MANUSCRIPT LETTER SIGNED AS COMMANDER OF THE CONTINENTAL ARMY ("GO: WASHINGTON"), RESPONDING TO "THE ADDRESS OF THE CITIZENS OF NEW YORK, WHO HAVE RETURN'D FROM EXILE"

1 1/2 pages (12 7/8 x 7 7/8 in.; 326 x 199 mm) on a bifolium of laid paper (watermarked Britannia | jj), body of the letter in the hand of Richard Varick, [New York, 27 November 1783], directed "To the Citizens of New York who have returned from Exile," integral blank with a contemporary clerical transcription of the address to Washington that prompted the present response; central fold reinforced, just touching a letter of Washington's large, bold signature, some other fold repairs.

General Washington graciously welcomes back to Manhattan the citizens "who from the noblest Motives have suffered a voluntary Exile of many Years, ... May the Tranquility of your City be perpetual. May the Ruins soon be repaired, Commerce flourish, Science be fostered; And all the civil and social Virtues be cherished, in the same illustrious Manner, which formerly reflected so much Credit on the Inhabitants of New York."

Cornwallis's surrender at Yorktown may have ended the field campaigns of the Revolution, but it did not end the British occupation of New York City. Not until the Treaty of Paris was finally signed and ratified did Sir Guy Carleton begin to organize his Redcoats for withdrawal—an action which precipitated the flight of many American Loyalists to Nova Scotia. Evacuation Day came on 25 November: Carleton and his troops marched out of Manhattan, while General Washington, Governor Clinton, and their cohorts marched in, for New York City was being retaken not by the Continental Army but by the civil government of New York.

Washington was greeted by cheering crowds. One woman who saw the General ride by, escorted by the Westchester Light Dragoons, later recalled, "We had been accustomed for a long time to military display in all the finish and finery of garrison life; the troops just leaving us were as if equipped for show, and with their scarlet uniforms and burnished arms, made a brilliant display; the troops that marched in, on the contrary, were ill-clad and weather beaten, and made a forlorn appearance; but then they were our troops, and as I looked at them, and thought upon all they had done and suffered for us, my heart and my eyes were full, and I admired and gloried in them the more. ... (quoted in Freeman, George Washington, 5:462–63).

The Stars and Stripes were hoisted at Fort George on a flagpole that had been vandalized and greased by departing Loyalists. George Washington stood at the center of great celebration that continued for nearly a week. He received and replied to four other addresses welcoming and thanking him for his role in the liberation of New York. But the present reply by Washington is the most broad and inclusive, since the other four were sent to more narrow, specific groups or societies (the Ministers, Elders, Deacons, and Members of the Reformed German Congregation of New York; the Marine Society of New York; the Members of the Volunteer Association and other Inhabitants of the Kingdom of Ireland who have lately arrived in the City of New York; and the Freeholders and Inhabitants of Kings County). No original manuscript survives for these latter four responses by Washington.

The laudatory address made to Washington by citizens returned from exile was transcribed onto to the conjugate blank of Washington's reply, and clearly demonstrates the enormous gratitude that civilian Americans had for the commander-in-chief: "To his Excellency George Washington Esquire, General and Commander in Chief of the Armies of the United States of America—The Address of the Citizens of New York, who have return'd from Exile, in behalf of themselves and their Suffering Brethren. ... At a moment when the arm of Tyranny is Yielding up its fondest usurpations; we hope the Salutations of long suffering Exiles, but now happy freemen, will not be deemed an unworthy tribute. In this place, and at this moment of exultation and triumph, while the Ensigns of Slavery still linger in our sight, we look up to you, our deliverer, with unusual transports of Gratitude and Joy. Permit us to Welcome you to this City, long torn from us by the hard hand of Oppression, but now, by your Wisdom and energy, under the guidance of Providence, once more the seat of Peace and freedom; we forbear to speak our gratitude or your Praise. We should but echo the voice of Applauding Millions; But the Citizens of New York are eminently indebted to your virtues and we who have now the honour to address your Excellency, have been often companions of your sufferings, and witnesses of your exertions. Permit us therefore to approach you Excellency with the dignity and Sincerity of freemen, and to Assure you, that we shall preserve with our latest breath our Gratitude for your Services, and Veneration for your Characters; and accept of our sincere and earnest Wishes that you may long enjoy that calm domestic felicity which you have so generously sacrificed; that the Cries of Injured Liberty may never more interrupt your repose, and that your happiness may be equal to your Virtues."

The address bears the names of the thirteen original signatories representing the meeting of exiles: Thomas Randall, Daniel Phoenix, Samuel Broome, Thomas Tucker, Henry Kipp, Patrick Dennis, William Gilbert Sr., William Gilbert Jr., Francis Van Dyck, Jeremiah Wool, George Janeway, Abraham P. Lott, and Ephraim Brashier. (The choice of thirteen signers was undoubtedly an allusion to to the thirteen states.) The transcribed address is dated 22 November—as is the original manuscript, now in the Washington Papers at the Library of Congress—but the date has been here changed to the 26th. The later date likely represents the day that the address was actually delivered to Washington, but it was clearly written earlier than that (and undoubtedly on the 22nd) because of the reference to British flags still flying above New York City.

Washington's gracious response is modest in tone, and—at the expense of the Loyalists then streaming northward—generously acknowledges the very real sacrifices made by colonists who abandoned their homes in order to gain independence: "I thank You sincerely for your affectionate Address, and entreat You to be persuaded that Nothing could be more agreeable to me than your polite Congratulations: Permit me, in Turn, to felicitate You on the happy Repossession of your City.

"Great as your Joy must be on this pleasing Occasion, it can scarcely exceed that which I feel, at seeing You, Gentlemen, who from the noblest Motives have suffered a voluntary Exile of many Years, return again in Peace & Triumph to enjoy the Fruits of your virtuous Conduct.

"The Fortitude and Perseverance which You and your suffering Brethren have exhibited in the Course of the War, have not only endeared You to your Countrymen, but will be remembered with Admiration and Applause to the latest Posterity.

"May the Tranquility of your City be perpetual. May the Ruins soon be repaired, Commerce flourish, Science be fostered; And all the civil and social Virtues be cherished, in the same illustrious Manner, which formerly reflected so much Credit on the Inhabitants of New York. In fine, may every Species of Felicity attend You Gentlemen & your worthy fellow Citizens."

A moving and significant manuscript, recording the hopes and aspirations held by George Washington for the greatest city in the world's newest nation.

Writings of George Washington, ed. Fitzpatrick, 27:250. (nb: some of the auction-record sites record the sale of another copy of this letter at Julia Auctioneers [now Morphy Auctions] in 2014. That letter was, in actuality, a facsimile of the present, and the Morphy website describes the letter as unsold.)

1 1/2 pages (12 7/8 x 7 7/8 in.; 326 x 199 mm) on a bifolium of laid paper (watermarked Britannia | jj), body of the letter in the hand of Richard Varick, [New York, 27 November 1783], directed "To the Citizens of New York who have returned from Exile," integral blank with a contemporary clerical transcription of the address to Washington that prompted the present response; central fold reinforced, just touching a letter of Washington's large, bold signature, some other fold repairs.