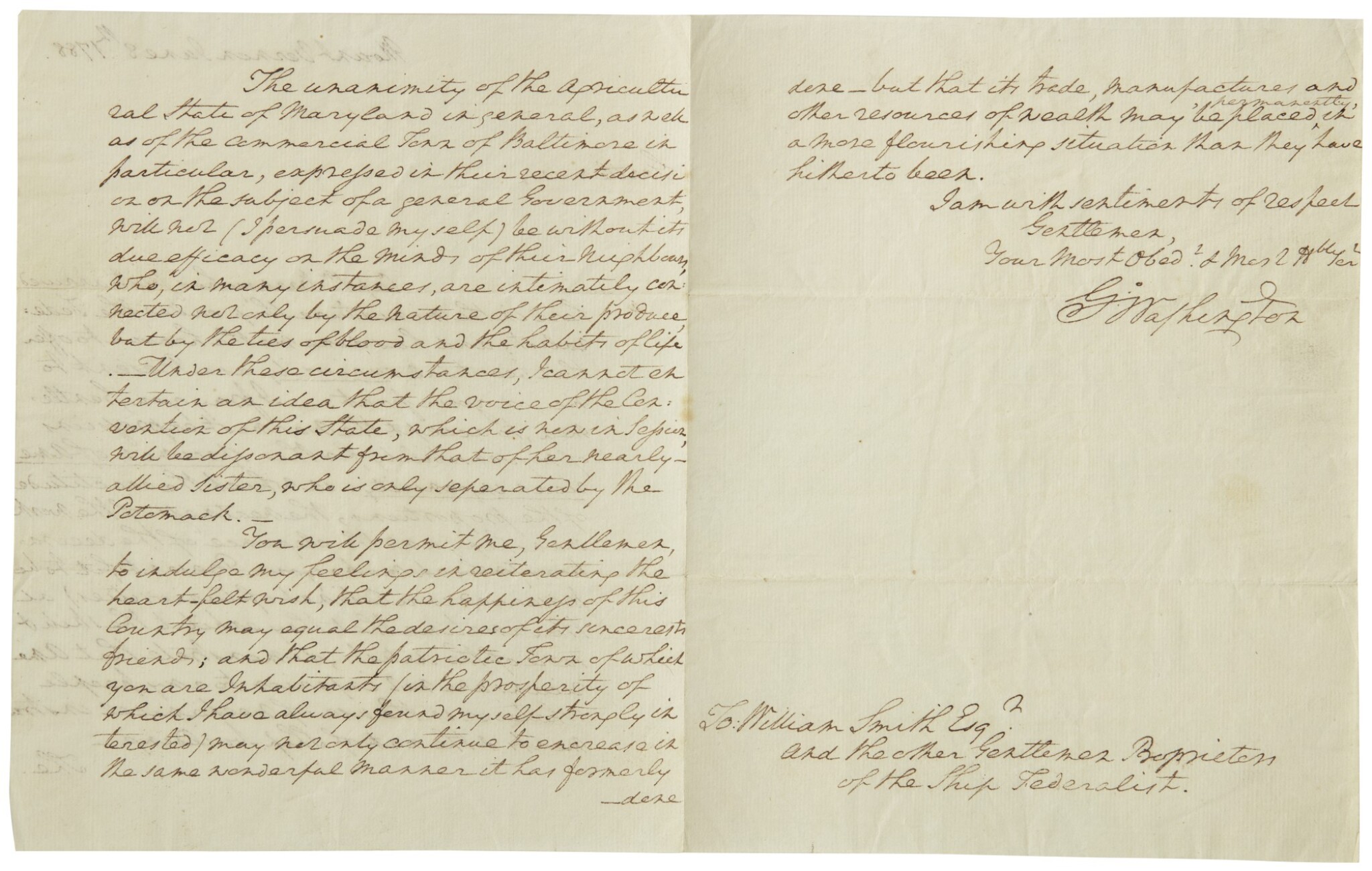 AUTOGRAPH LETTER SIGNED ("GO: WASHINGTON"), TO WILLIAM SMITH "AND THE OTHER GENTLEMEN PROPRIETORS OF THE SHIP FEDERALIST," DISCUSSING THE PROSPECTS FOR RATIFICATION OF THE UNITED STATES CONSTITUTION

Washington celebrates Maryland's ratification of the Constitution and looks forward to the ratifying convention of his own Virginia shortly joining "her nearly-allied Sister." If it is proper to think of George Washington as the Father of his Country, he should be considered her midwife as well. Had he not lent his prestige and approval to the Constitutional Convention of 1787, firmly supported its ratification, and then agreed to fill the office of President that the Convention created, the United States could well have died aborning. The Convention had been called by the Annapolis Convention of the previous year and was intended to amend the Articles of Confederation, which threatened to splinter the foundling republic into thirteen separate nations. Meeting in secret, the Constitutional Convention quickly concluded that the Articles of Confederation needed to be completely overthrown in favor of an entirely new frame of government. The result was the proposed United States Constitution, which the Convention decreed would go into effect once it had been ratified by just nine states. This was itself a radical departure from American policy: the Articles of Confederation had provided that any alteration or amendments to them need a unanimous ratification by the states.

On 28 April 1788, Maryland became the seventh state to ratify the Constitution. As part of the celebratory procession in Baltimore, a group of merchants and shipowners had commissioned a miniature ship, fifteen feet in length, christened The Federalist, to be mounted on wheels and drawn by four horses. The ship was then sent to Mount Vernon, navigated down Chesapeake Bay and up the Potomac by Captain Joshua Barney, as a gift to Washington. The soon-to-be president opens his letter by thanking his well-wishers:

"Captn Barney has just arrived here in the miniature Ship called the Federalist; and has done me the honour to offer that beautiful curiosity as a Present to me, on your part. I pray you, Gentlemen, to accept the warmest expressions of my sensibility for this specimen of American ingenuity: in which the exactitude of the proportions, the neatness of the workmanship, and the elegance of the decorations (which make your Present fit to be preserved in a Cabinet of Curiosities) at the sametime that they exhibit the skill & taste of the Artists, demonstrate that Americans are not inferior to any people whatever in the use of mechanical instruments & the art of Ship-building."

Washington then moves to the real subject of his letter, the prospects of ratification of the Constitution; although Maryland had strongly ratified, in Virginia, ratification was being contested. "The unanimity of the Agricultural State of Maryland in general, as well as of the commercial Town of Baltimore in particular, expressed in their recent decision on the subject of a general Government, will not (I persuade myself) be without its due efficacy on the Minds of their Neighbours, who, in many instances, are intimately connected not only by the nature of their produce, but by the ties of blood and the habits of life. Under these circumstances, I cannot entertain an idea that the voice of the Convention of this State, which is now in Session, will be dissonant from that of her nearly-allied Sister, who is only seperated by the Potomack.

"You will permit me, Gentlemen, to indulge my feelings in reiterating the heart-felt wish, that the happiness of this Country may equal the desires of its sincerests friends; and that the patriotic Town of which you are Inhabitants (in the prosperity of which I have always found myself strongly interested) may not only continue to encrease in the same wonderful manner it has formerly done—but that its trade, manufactures and other resources of wealth may be placed, permanently, in a more flourishing situation than they have hitherto been."

Thirteen days after he wrote this letter, New Hampshire became the ninth state to ratify the Constitution, thus putting the charter into effect. The ship Federalist did not fare so well: in his diary entry for 24 July 1788, Washington noted, "A very high No. Et. Wind all Night, which, this morning, being accompanied with Rain, became a hurricane—driving the Miniature Ship Federalist from her Moorings, and sinking her— … & doing other and great mischief … it was violent and severe—more so than has happened for many years."