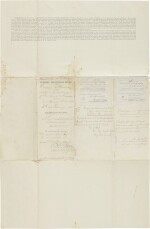 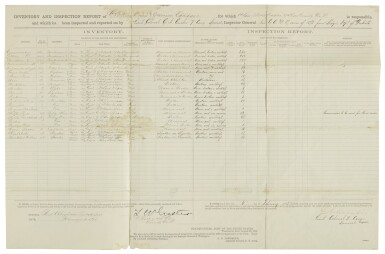 DOCUMENT SIGNED ("G.A. CUSTER") AS LIEUTENANT COLONEL OF THE SEVENTH CAVALRY REGIMENT, MAKING AN INVENTORY OF EQUIPMENT, MUCH OF WHICH WAS UNUSABLE

Report from the last frontier post Custer and his immediate command were stationed at before marching to the Battle of The Little Big Horn. Signed by his brother Thomas W. Custer ("T.W. Custer").

A large amount of equipment is inventoried, including insignia, bedsacks, mess packs, hatchets, and a trumpet, most of which is remarked as "worn out, broken, worthless" with allusions to the regiment's field service. Only the shelter tents were deemed worth saving, and "recommended to be used for horse covers."