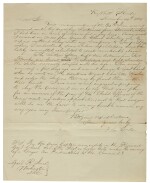 Dade writes here of his impending move to Fort Brooke in the Tampa Bay area. From there, he would command the detachment that marched to the relief of Fort King, where Indian conflict with white settlers was reaching a fervid peak. Tensions could be traced back to the Moultrie Creek Treaty of 1823, wherein the Indians were allocated land too poor to cultivate or raise cattle, and the resulting years brought flooding, famine, and eventual attempts at removal. On 28 December, the Seminole leader Osceola planned an ambush to meet Dade's troops as they marched through the reservation, and about one half of his command were hit by initial fire. The remaining able-bodied men, now badly outnumbered, were gradually shot throughout the day-long engagement, leaving only a handful of survivors.

Omitting his rank, Dade has styled this letter as a private communication. His concluding entreaty "Am I not entitled to the Command?" pointed out a vacancy in the Fourth Infantry Regiment, but cannot refer to the Fort King expedition about which he had no direct knowledge at the time. It probably was meant to refer to a permanent promotion to the rank of Major, which he then held only by brevet. Promotion in the old Army was notably slow, with most officers persevering in a grade for many years until an opening occurred. Dade's quick volunteering to lead the expedition was undoubtedly motivated in part by the possibility of a subsequent promotion.

"Your communication of the 30th June was not received until this day, when I returned form Pensacola, where I received an Order from General Clinch directing me to repair without delay with my Company to Tampa Bay, where, I understand, some Indian depredations have been lately committed calculated to create considerable alarm. The Sutler's Store... was burnt by the Indians, and Capt. Saunders the Sutler narrowly escaped with his life. This event occurred a few days ago and was not known to Genl. Clinch when he wrote me. He directs me to visit Charlotte's Harbor and order the Indians that may be found there within their limits. I am now much engaged in preparing to obey the Order, and can only say that your plan for an increase of the pay of the Field Officers of the Army meets my entire approbation... P.S. I am the senior Captain now on duty in the Regiment. Genl Clinch, Col. of the Regt. on higher duty, makes the vacancy of a Major. Am I not entitled to the Command?"

Dade arrived at Fort Brooke on 21 December. The orders for the march were already issued with Captain George W. Gardiner to be in command, but Gardiner's wife was ill and Dade offered to take over. The column set out on 23 December. Later Gardiner overtook the march after arranging for his wife to be transported to better care at Key West on the vessel that had just brought Dade; he would assume command at the battle, and meet his subsequent demise. Among other honors, what would become Florida's most populous county was promptly named for Dade.

Although a longtime officer, few of the Virginian's writings appear to have been preserved, with an apparent complete absence of auction records going back to 1916.