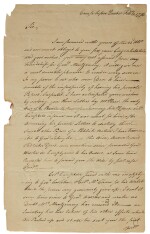 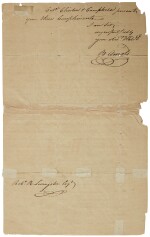 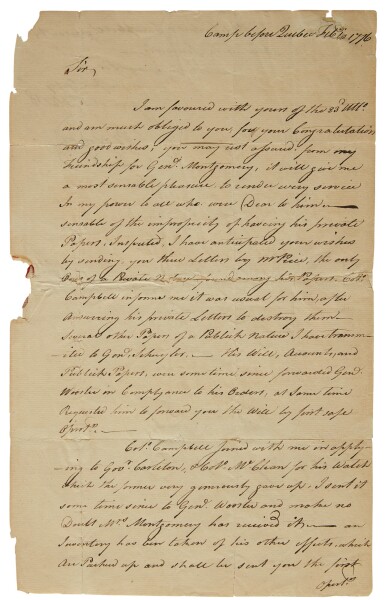 AUTOGRAPH LETTER SIGNED ("B. ARNOLD") TO ROBERT R. LIVINGSTON, CONCERNING THE PERSONAL EFFECTS OF THE LATE RICHARD MONTGOMERY, KILLED IN THE INVASION OF QUEBEC

American hopes to add Canada ("the 14th colony") to the rebellion ended with the death of Montgomery in a blizzard while leading the American assault early in the morning of New Years Eve, 1775. He was killed by the first volley from a blockhouse guarding an entrance as he led the American charge in an effort to take the old city. His body was left in the snow that morning, as the loss of their leader resulted in the retreat of his column. The collaborating attack under Arnold also faltered after initial success, with Arnold wounded. The subsequent American siege operation collapsed with the arrival of British reinforcements in the Spring. General Philip Schuyler, in overall command of the invasion of Canada but forced to stay behind by illness, had, as did George Washington, great confidence in the Irish-born Richard Montgomery, his second in command. Montgomery's move to America and marriage into the mighty Livingston family would involve him fully in the Revolution. Congress elevated him to the rank of Major General while he was in Canada. He was the first Continental Army general officer to be killed in the Revolution, and was mourned both here and in Britain where he was eulogized in Parliament. Sixteen American counties are named for him, as well as the city of Montgomery, Alabama, and other places.

In addition to the veteran Wooster and the active Arnold, and recipients Schuyler and Livingston, these two letters involve other figures of the failed attempts in Canada, with mention of later turncoat officer Rudolphus Ritzema, sent by Wooster to inform Schuyler of the post-Quebec situation; Captain John Macpherson, Montgomery's aid who was killed with him; James Price, the Montreal merchant who aided the American cause financially; Col. Donald Campbell who led the retreat of Montgomery's column; and Major Matthias Ogden, who accompanied Arnold's famed march to Quebec. On the British side, Arnold has mentioned British Governor and military commander in Canada Guy Carleton, and Allan MacLane, the commander at Quebec.

The letters reads, in part: "...you may rest assured from my Friendship for Genl. Montgomery, it will give me ... pleasure to render every service in my power to all who were Dear to him. Sensible of the impropriety of having his private Papers Inspected, I have anticipated your wishes by sending you three letters by Mr. Price, the only Papers of a Private Nature found among his Papers. Colo. Campbell informs me it was usual for him, after answering his private Letters to destroy them. Several other Papers of a Publick nature I have transmitted to Genl. Schuyler. His Will, Accounts, and Publick Papers were some time since forwarded Genl. Wooster in complyance to his Orders, at Same time Requested him to forward you the Will...

"Colo. Campbell joined with me in Applying to Govr. Carleton & Colo. McClean for his watch which the former very generously gave up. I sent it some time since to Genl. Wooster and make no doubt Mrs. Montgomery has received it. An Inventory has been taken of his other effects, which are Packed up and shall be sent you the first Oprty..."